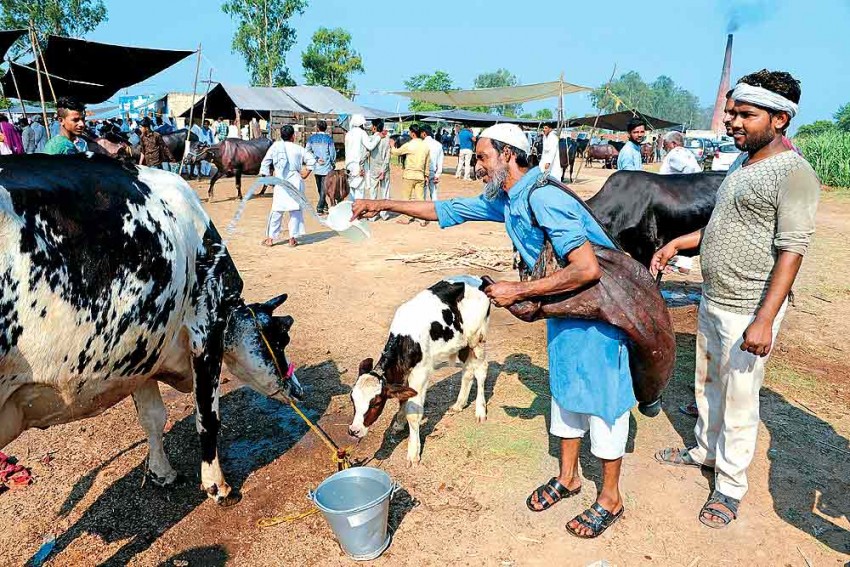 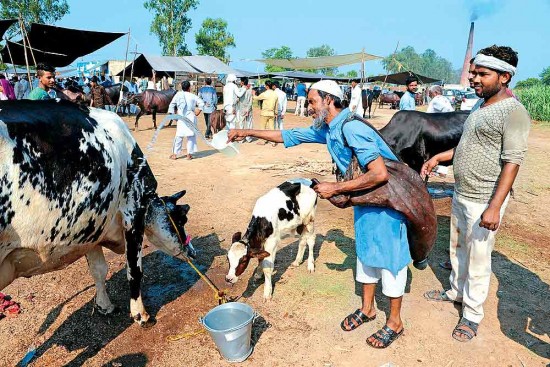 As he made his way from Garh Mukteshwar in Uttar Pradesh to Salahpur near Meerut, Jit­ender, a thirty something far­mer, felt his courage slowly crumble. He had brought Rs 70,000 to buy a buffalo at Salahpur’s weekly farm-animal fair. But by the time he got there, he lost his nerve. “I might be attacked by gau rakshaks,” says Jit­ender, anxious about riding home with a buffalo, should he buy one. “The ­rakshaks won’t care if my buffalo is for milking. They will accuse me of ­wanting to slaughter her,” he says.

The fair at Salahpur has got, every Tuesday for twenty years, up to a thousand buffaloes. It caters to buyers from western UP, Rajasthan and Haryana. But this week, business fizzled out before it could even begin. By noontime, about 200 buffaloes and a dozen cows arrived. 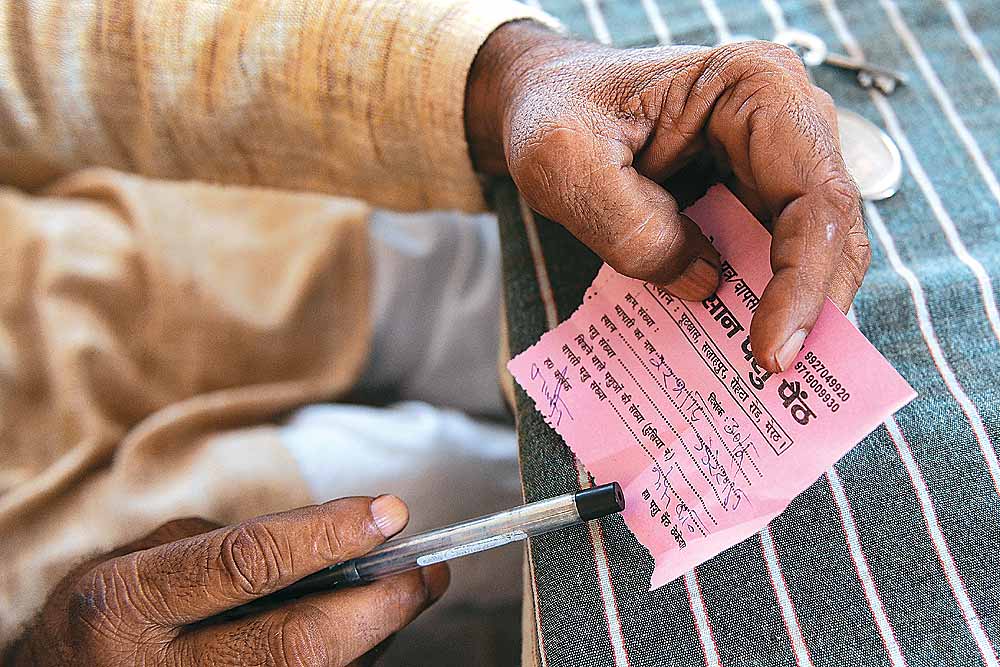 Receipt for animals brought and sold in Salahpur mandi.

With rules for animal trade in perpetual flux, even sellers such as Riazul, a local resident, are ruffled. Riazul fattened his buffalo with feed worth Rs 250-300 daily and brought her to this fair. “She gives 14 litres of milk,” he says. “We have little to eat at home. I have two children and a wife. I want to sell my buffalo but where are the buyers? Are they dead?”

They’re not quite dead, just stunned by circumstances. First, in April, UP bra­nded most abattoirs illegal and closed them. Of the remaining, 42 are exp­ort-approved abattoirs and only four cater to local meat demand. Thus, retail trade in buffaloes all but stopped in UP. Now the central government has issued new rules for the entire country that prohibit trade in farm animals at markets—like at Salahpur—if the purpose is slaughter. 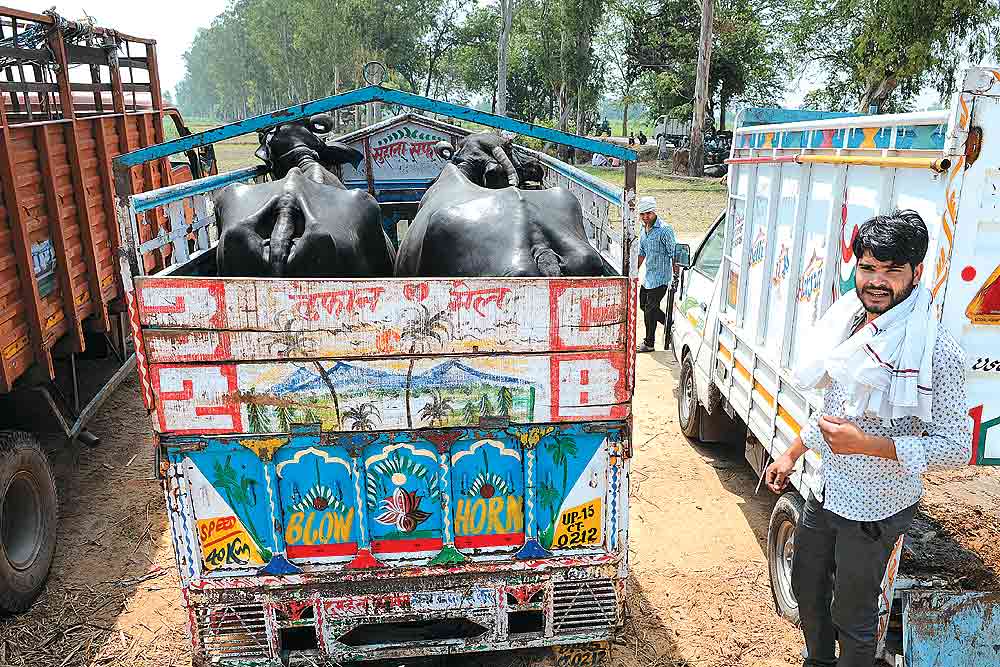 Sirajuddin Qureshi, MD of Hind Group, a meat exporter, says importers have been persistently calling from overseas ever since the rules changed. “They ask why India is fussing over buffaloes, which are not considered holy. They want to know if supplies will continue,” he says. Meat exporters, he says, shunned trade in cows out of respect for Hindu sentiment. “But now, after these new rules, exporters are in complete panic.”

As the latest rules seem to equate slaughter with cruelty, middlemen ­expect more, not less, vigilantism. This is what ultimately halts the business. In addition, for the first time, the rules address those buying farm animals for ‘non-farm’ purposes. What this means is, meat exporters can no longer access animal markets for buffaloes. They would be forced to buy directly from farmers, putting them at more of a risk of being thrashed by vigilante groups—and making the task logistically impossible.

“Isn’t it cruel when seventy humans are packed in a bus meant for forty,” asks Sami Qureshi, a buffalo trader from Barnawa, Baghpat. He feels the government is targeting Muslims, particularly Qureshis, by repeatedly drawing attention to slaughterhouses and meat exporters. “If farm animals won’t be allowed to die, how will new supplies of animals come, who will care for them once they don’t give milk?”

The new rules, however, strictly say that buyers and sellers must certify that the animal is not for slaughter. Only those who can prove they are farmers can buy or sell them. There is a six-month cooling period when farmers are barred from reselling animals.

“How can sellers know what buyers will do with buffaloes afterwards? These rules are only to terrify us,” says Haji Aslam, who heads the Meerut Dairy Association. Big, overfed buffaloes, which are washed and polished to oily blackness at markets like Salahpur are failing to tempt buyers as a result. The buffalo market has all but collapsed. The other impact is being felt in villages where trade in buffalo is the only source of inc­ome, like Mandhiyai near Sar­dhana, which hosts one of the biggest regional farm fairs. 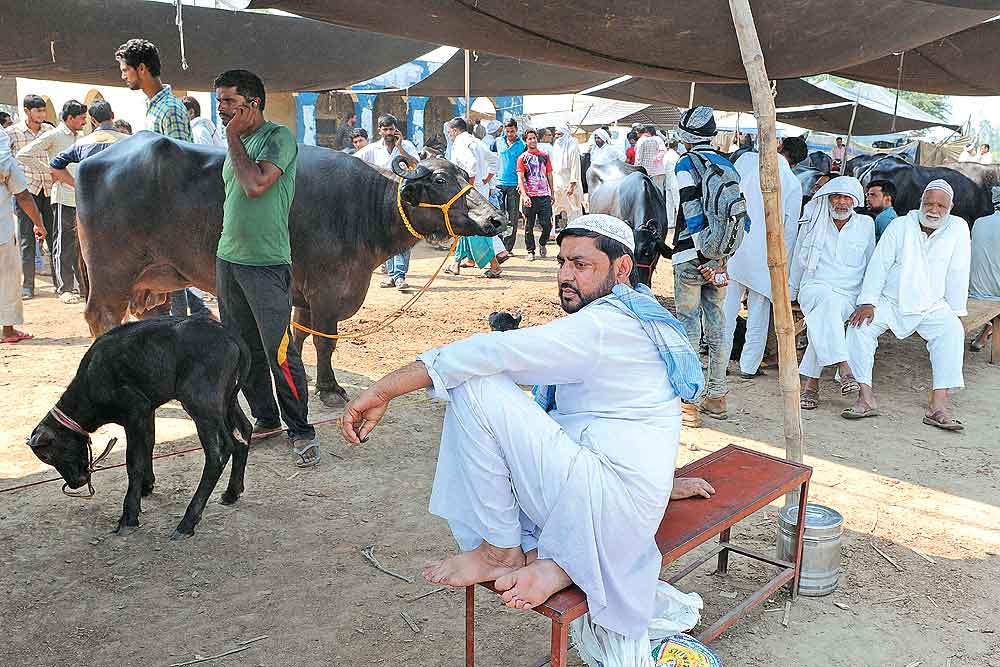 A trader awaits ­buyers for his buffalo and calf

Shabbir, only 15, was taking buffaloes to the slaughterhouse in Delhi’s Ghazipur last week. “We were caught and thrashed by gau rakshaks near Delhi’s border. They took our animals,” he says. Kamruddin, another resident whose sons buy buffaloes from farmers in Haryana, says they are running out of money for food. His wife, Nanhi, says, “What do we eat but potatoes and rice? It’s become unsafe to do the work we did for generations.” The families in Mandhiyai are 75 per cent Muslim, most landless and all linked with the farm animal trade.

“Mandhiyai’s market did badly this week because Haryana did not send enough buffaloes here. We hardly got fifty percent of the usual supply,” says Haji Babu, who owns the market. Haji Jameel, pradhan, Mandhiyai, says, “Five thousand people here depend on this work. If their only source of income goes, what will they do but rob and loot? It’s a very anxious time with the rules constantly turning against us.” 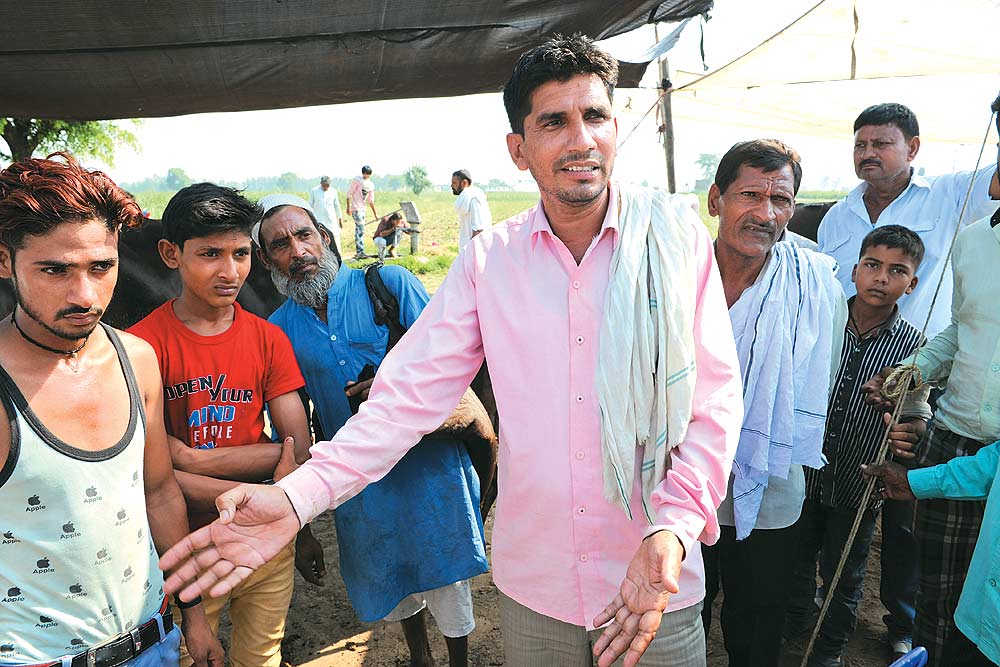 The meat export trade is also closely aligned with the Rs 40,000-crore leather trade, dominated by Dalit workers. In all, it is the Qureshis who have taken the lead among leather traders and meat exporters, followed by Hindus and Jains. As head of the Jamaitul Quresh, the community’s apex body, Sirajuddin Qureshi also has to deal with anxious members of the 15 million Qureshis in the buffalo trade.

“I really don’t believe the new rules match the Prime Minister’s statements. He talks of creating employment but these rules will render jobless five crore people engaged in meat export, buffalo transport, skinning and the leather trade,” he says. The most shocking aspect of the new rules, he feels, is that the meat exp­orters, transporters and traders were never once consulted. “How is it possible to change rules outright without notice?”

Often, meat exporters work on ­advance agreements with farmers, who agree to sell their dry she-buffaloes or unwanted males at pre-arranged dates. Those deals, according to traders, will keep supplies going for another fortnight or a month. After that, unless the government excludes buffaloes from the latest rules, there won’t be any left to slaughter—and fewer for dairying.

“I think the government will ret­hink. These rules can’t be here to stay. They are a mistake,” says Ali, mustering optimism. But the problem shows up in the shape of fear. “Buyers are too scared. They want to select animals in Salahpur and then want us to deliver them home. But even we don’t want to go afar,” says Ikram, a transporter-trader from Rohta village.

Om Prakash Pal, a landless farmer from Pabali Khas, wants a buffalo to ­replace one gone dry, which he has sold. He says, “The government should think about a landless farmer. How will he live if he can’t even buy a buffalo without risking his life?”

By Pragya Singh and Jitender Gupta in western UP