Home  »  Magazine  »  National  » Capital/Hotspot »  Covid-19 Cases Surge In Delhi. Is The Capital In For A Long Lockdown?

Covid-19 Cases Surge In Delhi. Is The Capital In For A Long Lockdown? 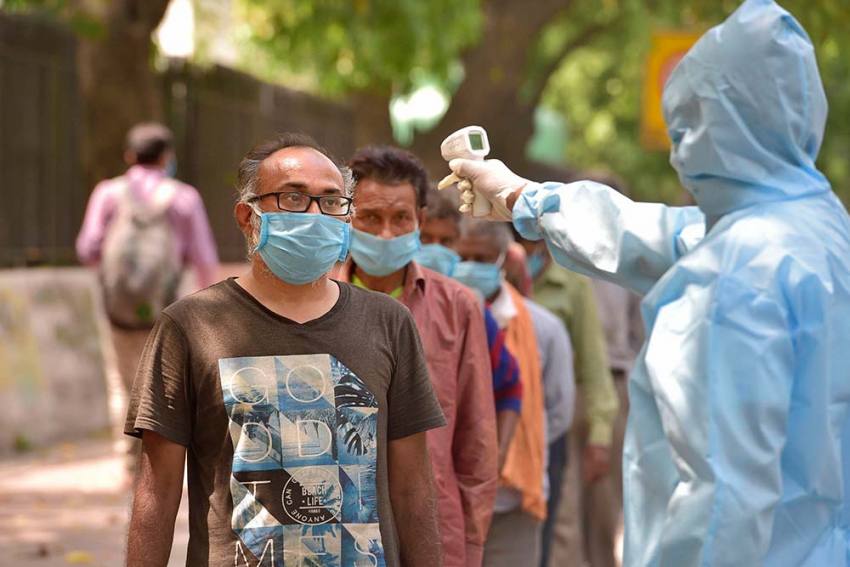 Aggressive testing is No. 1 in the Delhi government’s strategy to contain COVID-19
Photo by PTI
Bhavna Vij-Aurora April 24, 2020 00:00 IST Covid-19 Cases Surge In Delhi. Is The Capital In For A Long Lockdown? 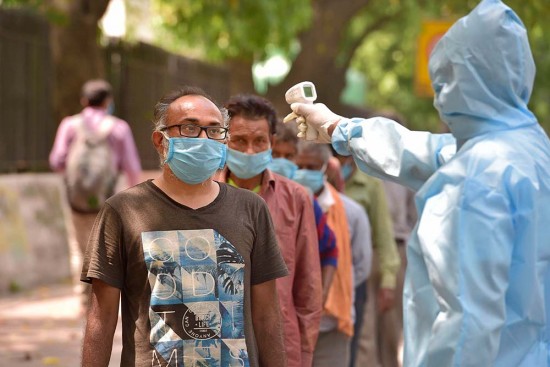 Delhi chief minister Arvind Kejriwal painted a grim picture as he announced that lockdown-related restrictions could not be eased in the Capital. The number of COVID-19 cases, especially asymptomatic ones, has been rising rapidly in Delhi and any relaxation in the lockdown for economic activities could see a further surge, overwhelming the healthcare system. “I want to offer relaxations, but what if the situation worsens and we fall short of ICUs, oxygen and ventilators, and people die in large numbers? We won’t be able to forgive ourselves,” he said, addressing mediapersons on April 19. He wants to wait another week before reviewing the decision.

“The Delhi government is doing a day-to-day assessment of the situation. Even we want people to get on with their lives, but seeing the situation in countries like Italy, Spain and the US, it is better to err on the side of caution,” says Jasmine Shah, vice chairman of Dialogue and Development Commission, Delhi government’s top advisory body.

It is definitely not an easy fight for Delhi, now standing at No. 3 on the country’s COVID-19 table with 2,156 cases, behind only Maharashtra (5,218 cases) and Gujarat (2,178). Mumbai (2,455 as on April 21) accounts for nearly half of the cases in Maharashtra and more than half (1,298) the cases in Gujarat were reported from Ahmedabad. In the other most-affected states too, it is the urban centres that are bearing the brunt of the virus. With 585 positive cases, Jaipur tops the list in Rajasthan (1,659 cases). And of the 1,520 cases in Tamil Nadu, 308 are from Chennai.

Cases in Delhi also showed a spike due to increased testing following the South Korean model.

Mohan Rao, former professor of public health at the Centre for Social Medicine and Community Health in Jawaharlal Nehru University, New Delhi, attributes the rise of COVID-19 cases in urban centres to “overcrowding and pockets of high-density population”. Delhi and cities in Maharashtra, Tamil Nadu and Gujarat have the maximum migrant population from the heartland states of Uttar Pradesh, Bihar and Madhya Pradesh. “It is the case even in tier-two and tier-three cities, where lockdowns and social distancing began much later,” says Rao.

Social distancing continues to be a problem in places like Dharavi (168 cases as on April 21) that has emerged as a coronavirus hotspot in Mumbai. It is the country’s largest slum spread over 2.1 sq km, but with 700,000 people living cheek-by-jowl, it is one of the most densely populated areas in the world with a density of 270,000 per square km.

In Delhi too, a large number of containment zones, from among the total 84, are in overcrowded resettlement colonies with a substantial migrant population. These include Jahangirpuri, Trilokpuri, Tughlakabad Extension and Pandav Nagar. As Delhi is part of the larger National Capital Region, which includes parts of Haryana and Uttar Pradesh, there is more pressure with cross-border traffic being difficult to restrict.

According to Jasmine Shah, Delhi prevented a Dharavi-like situation as the government acted early. “We restricted gathering of people before other states did and planned well in advance. From the day the first positive case was reported in Delhi, we started preparing for a scenario where the number of cases would rise. We knew the rise would be exponential and wanted to be prepared. And we are,” he says. With two per cent of the country’s population, Delhi has reported over 12 per cent of all cases. 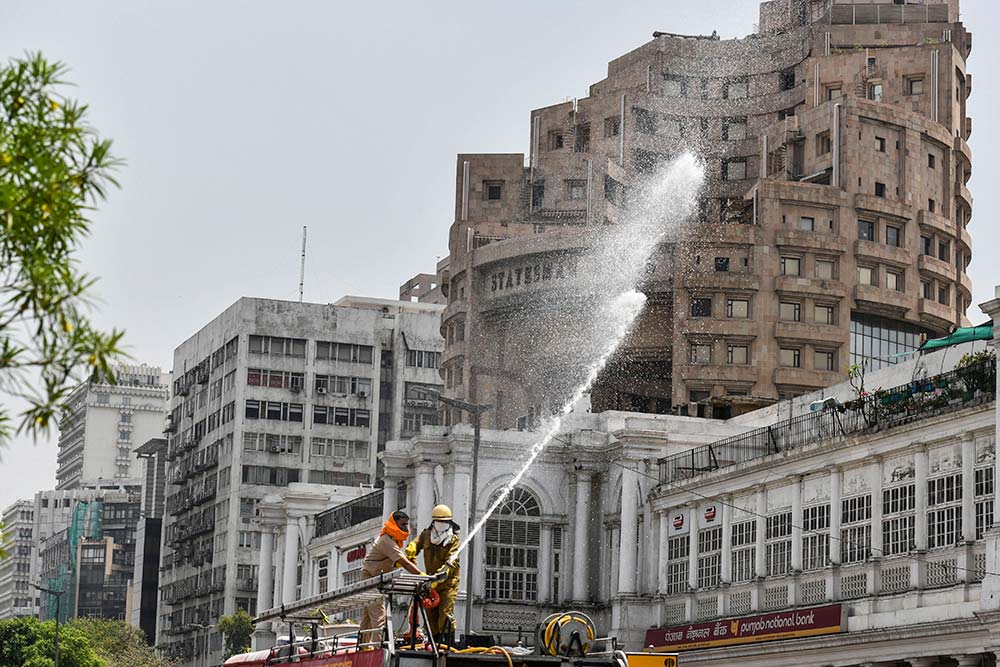 A sanitisation exercise under way in Connaught Place, the city’s commercial centre.

Shah says over 80 per cent of the cases in Delhi are either of those who returned from abroad or related to the Tablighi Jamaat Markaz congregation. Delhi’s Indira Gandhi International Airport, the biggest hub of international flights in the country, handled 1.9 crore passengers last year. Kejriwal also mentioned in his April 19 press briefing that passengers who returned from abroad in the past two-and-a-half months brought the virus with them. “And the maximum number came to Delhi,” he added. The mandatory quarantine protocol was started only after the guidelines were issued by the Centre.

Cases in Delhi also showed a spike because of increased testing. Following the South Korean model, the state government had decided to ramp up testing. At 1,342 tests per million population, Delhi has conducted the highest number of tests in the country. Among those tested in the past few days, as many as one-fourth tested positive and were asymptomatic. This has become a major cause of concern, and the government has decided to increase the use of rapid antibody testing kits, which check for the presence of coronavirus antibodies. Delhi health minister Satyendar Jain says the kits are being used in the red zones of the national capital. As part of rapid testing, 74 people were tested in Nabi Karim area on April 20, and all of them tested negative. The Delhi government has a total of 42,000 such kits as of now and more are being procured.

“We won’t be able to forgive ourselves if people die in large numbers.”
Arvind Kejriwal, Delhi CM

Rapid testing is part of the state government’s containment strategy and the kits will be used on the population randomly. “Increased testing is the first step in containing the virus. It is also the first T of Delhi government’s five-T policy that also includes tracing, treatment, teamwork and tracking. It will definitely show results,” says Jain, who also claims that Operation SHIELD, which was launched by the government in COVID-19 hotspots, has also shown results. The key aspects of Operation SHIELD in a containment are sealing, home quarantine, isolation and tracking, essential supply, local sanitisation and door-to-door health checks. All these aspects are being implemented diligently by the Delhi government. The effort has been successful in Dilshad Garden, Vasundhara Enclave and Khichripur, which have not had a single positive case in the past two weeks. Dilshad Garden was identified as the first hotspot by the government and became the first site where Operation SHIELD was applied. It has now been extended to all the containment areas.

To take care of the essential needs of people, the Delhi government has also launched doorstep delivery of ration in all the containment zones. An official says this has also set in motion the chief minister’s pet project. Home delivery of ration was among the major promises made by his Aam Aadmi Party in the run-up to the assembly elections earlier this year. For now, the initiative will be rolled out on a limited scale only at the sealed zones. The department of food, supplies and consumer affairs issued an order to this effect on April 20, detailing the rollout plan involving food supply officers, district magistrates, Delhi Police, civil defence volunteers and teams of “corona foot warriors”.

In addition, Kejriwal is believed to be personally monitoring the treatment protocol of patients admitted in various hospitals and watching out for any possible breakthrough that may happen. His government is aggressively pursuing plasma therapy with some ray of hope. The first patient who was administered plasma therapy at the city’s Max Hospital has shown positive results and was weaned off ventilator support. Jasmine Shah says the therapy had already been pre-tested at ILBS hospital under Dr S.K. Sarin, who is heading the Delhi government’s expert panel. “We are ready to face the challenge head-on, medically and also socially. The poor are being taken care of through various schemes and we are continuously monitoring to plug any gaps,” adds Shah.