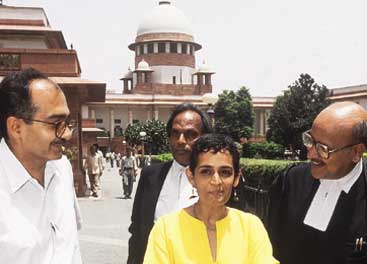 The tumultuous relationship between Roy and India's courts began in October 1999, when the apex court observed that Roy had made it "unhappy", that she could not be "permitted to pollute the stream of justice" like she had in her essay The Greater Common Good on the Narmada dam controversy. It "expected better behaviour" from her.

The mismatch in expectations, though, was to show up yet again next year. This time on a winter morning in December, when some lawyers alleged that Roy, along with two others, had screeched abusive slogans against the Supreme Court while protesting against its ruling on the dam. Roy was served notice in February 2001. She, in turn, filed a response that questioned the court's "disturbing willingness" to take on such an "absurd, despicable, entirely unsubstantiated petition".