Promise and paradox: the bigger the surge towards free polls, the less free it might be 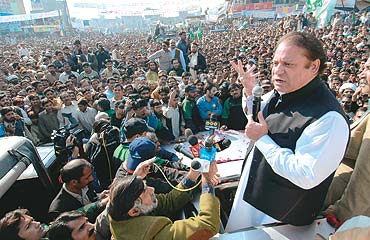 He should have been comparing the campaign style of different leaders, discussing who among the leaders best represents his interests, examining threadbare the bouquet of issues an electoral process inevitably presents. Instead, as the campaign for the January 8 hustings gathers momentum, this is what the ordinary Pakistani is asking: is it for real? will it be free and fair?

He has been prompted to ask this question because President Pervez Musharraf has taken to campaigning for the Pakistani Muslim League (Q), in gross violation of constitutional propriety that requires him to maintain strict political neutrality. True, he doesn't name the PML(Q). He merely requests the audience, as he did in Vehari in Punjab last week, to vote those politicians who supported him for eight long years. Only the politically naive wouldn't know it was the PML(Q) and its allies which enabled Musharraf to subvert Pakistan's democracy.