The Chennai police was taken by surprise last fortnight when it discovered that a Maoist couple had set up shop in the Ambattur Industrial Estate in the city’s suburbs. They were manufacturing segments of rocket launchers and despatching them to Naxalites in the Nallamalla forest in Andhra Pradesh. Raghu alias Srinivas Reddy, now identified by the AP police as Tech Madhu of People’s War, and his partner Sudharani networked with various small-scale industrial units in recession-hit Ambattur. Madhu, a diploma holder in mechanical engineering with knowledge of computer-aided designing, tied up with seven engineering units in Chennai by giving them small orders for parts which local manufacturers ostensibly didn’t know were spares for rockets and launchers. 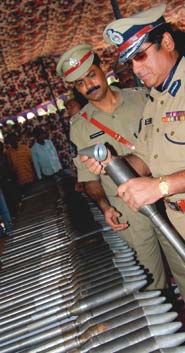 The lid was blown off the entire operation when the AP police tumbled upon huge stocks of rockets and launchers in Mahboobnagar and Prakasam districts. While 16 rocket launchers, 600 rocket shells and 300 bullets were seized at Jangireddypalli village near the Nallamala forests, another 275 rocket launchers were recovered from an unclaimed consignment in Giddalur town. They had been booked as spares for spinning mills. Since 2004, Naxalites have been known to use rocket launchers.

Senior police officials say TN, described as a ‘garden of peace’ by former CM J. Jayalalitha and her current successor M. Karunanidhi, has become a haven for Maoists for both logistical support and as a shelter base. Officials believe that besides Chennai, Kochi and Bangalore are also deemed safe hideouts.

Weapons for the Maoists in AP have never been in short supply. Their armoury includes country-made pistols (tapanchas), .303 rifles, sten guns, single-barrel and double-barrel guns,...