For all his sartorial elegance, Trudeau’s India visit, haunted by the Khalistan issue, achieved little 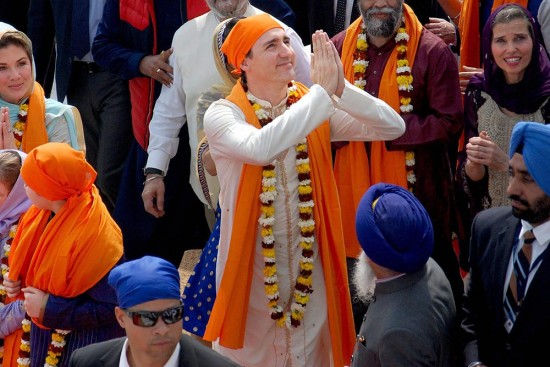 Justin Trudeau’s easy and infectious candour, all of it framed by his youthful looks, hasn’t ever missed its mark on overseas tours. At the Commonwealth leaders’ summit in 2015, even Queen Elizabeth wasn’t impervious to it. But, Trudeau’s week-long, first official visit to India did not quite go according to the Canadian script. Prime Minister Narendra Modi was not present at the Delhi airport to rec­eive him and his family members—an expectation raised by the fact that the Indian Prime Minister had often broken protocol to receive many of his “valuable guests” at the time of their arrival with his famous bear-hug. That warm gesture, it’s given to understand, is reserved for India’s special friends. The Canadian prime minister either did not fall in that exa­lted category, or India wanted to convey a message that not only Can­ada, but even sympathisers of the Khalistani separatist cause in Canada, were supposed to pick up. If this was a perceived ‘snub’, it didn’t end here. Trudeau wasn’t  welcomed on arrival by any of the chief ministers of the states he visited—Punjab, Gujarat, Uttar Pradesh and Maharashtra—though they met him later at other events. Moreover, his visit was overshadowed by that of Donald Trump Jr, who was in India on a business visit.

South Block denied that Trudeau was being snubbed; they said everything was governed by strict protocol. But a senior Indian diplomat acknowledged that the PM Modi didn’t go out of his way to break protocol, as with some others earlier. “The PM broke protocol for some visiting leaders, not all who come to the country,” he said. Modi’s abs­ence made it clear that India took note of the growing practice of soft-pedalling pro-­Khalistani elements in Canada.