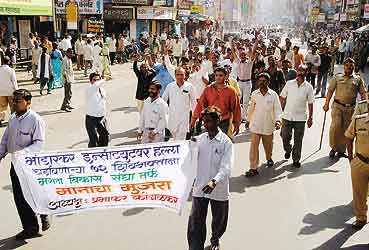 outlookindia.com
-0001-11-30T00:00:00+0553
The condemnation of the January 5 ransacking of Pune’s Bhandarkar Oriental Research Institute hasn’t quite measured up in intensity to the act itself. Activists of the Sambhaji Brigade had raided the 87- year-old institute, laying waste to invaluable archives, to protest its help to James Laine’s book Shivaji: Hindu King in Islamic India. The book is currently in the eye of a storm for uncharitable remarks on the parentage of the 17th century ruler.

Nearly a fortnight down the line, in a move seen as tacitly vindicating the vandalisers, the state government has banned the book and registered an offence against Laine and his publishers, OUP. The Congress- NCP combine is clearly unwilling to alienate the state’s sizeable Maratha votebank in an election year. Says writer Dilip Chitre, one of those acknowledged in Laine’s book: "The Sambhaji Brigade has Sharad Pawar’s indirect backing. The government has been rendered impotent."

Masterminds of the attack like Purushottam Khedekar are still at large. And protests against the book continue. On January 14, the 406th birth anniversary of Shivaji’s mother Jijabai, 35 Maratha outfits held a demo at Pune’s Lal Mahal, turning what is otherwise a low-key affairinto a bristling show of muscle.

A resolution steered by Ravindra Malvadkar of the Shiv Mahotsav Samiti demanded that the 72 SB members held for the attack be freed—echoing a call made at the Akhil Bharatiya Maratha Mahasangh’s ‘camera-friendly’ protest at the district collectorate. Malvadkar is planning to record powadas (folk songs) and speeches against Laine and his Indian ‘friends’. The Maratha Vikas Sangh wants to see the "objectionable documents" at the institute destroyed after the state government takes it over. And the Maratha Shikshan Parishad is targeting scholars who fed Laine with "stolid yarns".

SB spokesman Shreemant Kokate goes a step ahead. He accuses the institute of roping in Laine to write a blasphemous account and wants the state government to either hang Laine’s associates or hand them over to the SB. Describing the instituteas "a centre of cultural terrorism", he says, "even if it is burnt down ten thousand times, the insult inflicted upon Jijabai would not be mitigated". The SB has since threatened action against the American Study Circle, Deccan College, Bharat Itihaas Samshodhak Mandal and Tilak Maharashtra Vidyapeeth—all prominent research hubs of Pune.

This language has spread fear. Litterateur R.G. Jadhav, a recipient of SB threats, took police cover to preside over a Marathi literary meet. At its inaugural, Pawar got away with an oblique allusion to the SB vandalism, almost instructing researchers to "ensure that great personalities aren’t shown in poor light". Only after this did the obligatory formal censure come.

Critics are meanwhile questioning everything from the book’s title (saying India was far from being an Islamic country in the 17th century) to the lack of deference Laine showed in quoting "jokes" on Shivaji. With the book already withdrawn from India by OUP, the ban is pure tokenism, an act that will only stoke greater curiosity. Laine maintains he never said Dadaji Kondeo or Samarth Ramdas could have been Shivaji’s father. "My whole interest is not the historical Shivaji, but the shape of the narrative that gets told, historical or not." It is obvious that even historians who’d sought the book’s withdrawal hadn’t read it completely and, as Laine wrote in the LA Times last week, there’s nothing to prevent "rumour piling on rumour. "

A Word For The Wind