Corporate machinations are complex and crooked enough for Bhandarkar to have gone for the jugular. He doesn't. 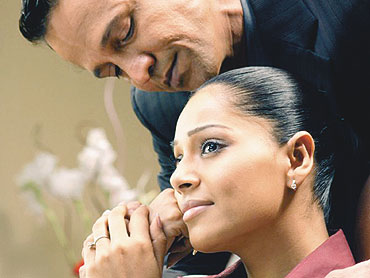 Corporate suffers from a huge Page 3 hangover. In its structure, it is rigorously faithful to Bhandarkar’s very own, much celebrated multiplex hit of 2005. So the entire action is built on varied characters walking in and out of the frames, their countless interactions and incessant conversations. It’s a format that creates a sweeping but flimsy social picture. Bhandarkar offers a brief glimpse into another world, he just about scratches the surface rather than go deep. The strategy worked rather well in Page 3, in fact, this "peeping Tom" mode of narration could itself be read as a comment on the frivolity of the society high-fliers that the film was all about. In Corporate we’d have needed something more incisive and acute. Corporate machinations are complex and crooked enough for Bhandarkar to have gone for the jugular. He doesn’t.

Almost all characters remain cliches. Most can be summed up with two-word descriptions—the old-fashioned industrialist, his yuppy and savvy rival, the venal and corrupt politician and their much-manipulated women. One thing which worked for Page 3 was that it was told through the point of view of one girl, the young journalist who covers the Page 3 beat. Corporate too has a woman, Bipasha, in focus but one whose journey is more an emasculation than an empowerment. And pray why is she driven by her man than her own dreams? Is that being liberated?

Nothing about the setting is new either—the rivalries, the plotting, the deals and counterdeals, the spying and bribing, the boardroom wars and truces, the ugly political nexus. Bhandarkar makes liberal usage of business jargon, which creates this seeming realism. The constant stress on ill psus, divestment, privatisation, MNCs, cola wars might make it seem as though Bhandarkar has got the pulse of contemporary corporate culture but has he been able to spin a good script out of it? In that sense, viewing Corporate is like glancing at the headlines of a business paper without actually looking at the stories themselves. In fact, way back, Shyam Benegal in Kalyug and Shridhar Kshirsagar in the tele-serial Khandaan managed to build far more engaging narratives with much the same backdrop and theme.