We have enough under-privileged at work, don't need a legislation, says industry Updates 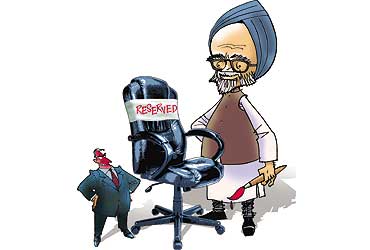 "The answer is to make the disadvantaged more competitive than they are today."
N.R. Narayanamurthy, Infosys chief mentor

"The solution is to equip them with the right skills, not mandatory quotas."
R. Seshasayee, MD, Ashok Leyland

"Though we don't ask for such details, it is easy to find such staff at worker level."
Adi Godrej Chairman, Godrej group

"We don't ask people their caste, and the government should not force us to."
Kishore Biyani CEO, Pantaloons

Even before the champions of meritocracy could come to grips with human resource development minister Arjun Singh's controversial proposal to introduce reservations for backward classes in government-aided elite educational institutions, PM Manmohan Singh set another cat among the pigeons by calling for affirmative action in the private sector. Predictably, the industry captains were outraged.

They came up with a justification opposing job reservations. Apex business bodies like the CII and FICCI made cursory noises about the need to broadbase opportunities, but then rattled off some startling figures. The CII contended that Dalits and backward classes comprise nearly half of the staff in the private sector. Its newly-appointed president and Ashok Leyland's MD, R. Seshasayee, claimed that more than 55 per cent of the employees in his company were from backward classes. Bajaj Auto chairman Rahul Bajaj, a vocal critic of quotas, chipped in saying that although appointments in his company were on merit, almost 30 per cent of the staff belonged to the under-privileged classes.

Seshasayee says, "Economic growth has not touched every section of the society. And it can't be left to market forces in the hope that the benefits will trickle down over time. The solution is to increase the competitiveness of the under-privileged, to equip them with the right skills and create conditions where they can be employed in their own right. Reservation is not the answer and we are against mandatory quotas in the private sector."

The pro-reservation lobby was quick to counter the figures and arguments. They felt that most of the under-privileged were employed for menial tasks. "The numbers which industrialists are throwing up suddenly are misleading. Today a majority of Dalits in the corporate sector are there purely by default as people from the upper castes wouldn't be ready to do menial jobs. Most Dalits in a firm like HLL would be plantation workers, cleaners and sweepers," says Chandrabhan Prasad, a leading commentator on Dalit issues.

In fact, a look at the board of directors of the top 100 Indian private sector firms (by revenues) shows that nearly 95 per cent of the directors are from the upper castes or the creamy-layer backward classes. The chances of any of the rest being a Dalit are slim, maintains Prasad. Even Adi Godrej, chairman, Godrej group, admits, "While we don't ask for such (caste-based) information at managerial level, I can say that it is easier to find such (backward caste) people at the worker level." He adds, "I think the problem is lack of higher educational opportunities for them. But now that finance is not a hindrance to education, I hope we will see that change."

Dalit activists say that a more revealing, and pertinent figure, which the Indian industry should make public, is the number of blue-collar and white-collar staffers from the SC/ST and backward classes. In addition, they think that if the industry is already employing under-privileged classes in such numbers, then why are they shying away from a legislation on the issue? They add that if firms like HLL, Pantaloons and Videocon can be sensitive to this issue, why can't others?

"HLL is alive to its responsi-bility towards the society in the area of creating opportunities for SC/STs and OBCs. We make conscious efforts in giving them opportunity and this is evident from our internal audits. We believe in training them in order to enable them to compete with general categories in seizing opportunities for employment and entrepreneurship," says a top HLL official. The firm's audit shows that 12 per cent of the employees are SCs, 7 per cent STs and 36 per cent OBCs. But HLL, too, does not provide details of the ratio between blue-collar and white-collar employees. The official adds that HLL's factory in Doom Dooma in Assam employs locals who are largely from the SC and tribal communities and that it has launched a scheme to recruit 100 apprentices from the reserved categories this year. The latter will undergo a 12-month training in sales, distribution and production at HLL and may, thereafter, be absorbed by the firm. Pantaloon conducts similar workshops for Dalit staffers. The Videocon group's Rajkumar Dhoot is all for affirmative action, as long as the cap is 10 per cent. "But we should ensure that backward class families below the poverty line benefit the most," he adds.

However, most Indian firms oppose job quotas. Influential business leaders like Infosys chief mentor N.R. Narayanamurthy believes "the solution is to make the disadvantaged people more competition-worthy than they are today. I am all for spending more money and effort in helping such disadvantaged people compete as equals with the best minds in the country." Adds Kishore Biyani, CEO, Pantaloons, "We should aim to create a seamless society. We don't ask employees what caste they belong to, and the government should not force us to either." He says companies can be asked to provide caste-related employment details in their annual reports. The CII is also compiling a report that'll look at internal mechanisms to make India Inc more inclusive.

As expected, the opposition in IT/ITES sector is higher. "There is no dotted line in our stationery asking for a person's caste. It doesn't matter to us. If tomorrow 80 per cent of the people qualifying for recruitment are SCs or STs, we will take them on. Then why should there be a mandatory provision to reserve seats for people from that segment?" questions Aditya Gupta, CEO, Infovision, a Delhi-based call centre. The IT industry's nodal body, NASSCOM, fears that any lowering of standards can impact the quality of output and service. "This can have disastrous consequences in case of export-oriented sectors that face global competition. We favour a programme of affirmative action focusing on outcomes, rather than a system of quotas and reservations," says Kiran Karnik, chairman, NASSCOM.

That's still acceptable to the pro-quota section. Dalit activists argue that affirmative action, along with efforts to promote entrepreneurship amongst backward classes, is the best way forward, as has been the case in the US. The listed American firms disclose details of their minority-inclusion programme. There's pressure on them to conduct business with companies owned by minorities. For instance, the big three carmakers—GM, Ford and DaimlerChrysler—make annual purchases of $10 billion from such suppliers.

The issue had last cropped up in the National Common Minimum Programme when the upa government had come to power, and the industry had opposed it vehemently. Now, the opposition is being nuanced. Some CEOs are supporting reservations. Others seem comfortable with voluntary affirmative action. Even the ones who hate it maintain that strong corporate growth in the past few years has resulted in more jobs for everyone, including those from the under-privileged classes and castes. Therefore the government should do nothing to upset the applecart by introducing quotas in private sector.

The pro-quota thinkers are ready with an answer: since employment opportunities are currently booming in India, it wouldn't hurt any company to employ more people from the lower and backward castes!

By T.R. Vivek and Arindam Mukherjee in New Delhi and Saumya Roy in Mumbai