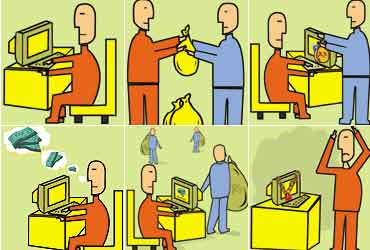 Sometime in February last year, three Chandigarh-based multi-level marketing (MLM) companies were born on the quiet. All three promised to give their members online job work and dangled the prospect of earning handsome commissions if they expanded the company network by bringing in more people into their fold. Soon thousands of students, housewives, unemployed young men and women, and those out to earn a fast buck, enrolled by paying Rs 16,500 each. They were all assured that some simple online work for the companies would earn them at least Rs 8,000 a month sitting at home, in front of the computer.

Cut to now. The Chandigarh police has registered cases of cheating against two of them, Best Internet Solutions and Onlinejobwork.com, while the third, Artex E-comm, has hurriedly shut shop. But it was only when the police arrested Jasdeep Singh Bains, a director of Onlinejobwork.com, a couple of weeks ago that the full ramifications of the scam came to light. Following in the footsteps of some well-known multinational direct selling companies, a host of clones have sprouted in the last couple of years, most of them floated with the sole intent of luring in people with false promises (see graphic).

Best Internet Solutions and Onlinejobwork.com promised lucrative online job work to entice people into investing money with them. All that Best Internet's members had to do was visit different websites listed on Best's site netkhazana.com. Netkhazana claimed to have tie-ups with these sites which were supposed to pay the members for just visiting them. According to the police, the company collected Rs 26 crore in 15 months by enrolling 18,000 members all over north India. Best Internet had no collaboration with any website. "It was just a ruse to attract more members and rake in the registration money," says A.R. Minhas, a netkhazana member.

Bains, the arrested director of Onlinejobwork.com, which claimed to provide work to members through its website dreammerchants4u.com, has told the police that he collected Rs 12 crore in about a year from 8,000 members. Both Onlinejobwork.com and Artex E-Comm claimed they were doing Business Process Outsourcing (BPO) for a US-based recruitment agency. The home-based workers, who were promised at least Rs 8,000 worth of work every month by the firms, were required to download resumes of foreign candidates from the website, and correct and arrange them according to a given format.

People paid Rs 16,500 each and signed up, and stood to earn much more if they recruited more people. All very hunky dory. "We create entrepreneurs" was dreammerchants4u.com's slogan. But the reality was rather different. Says Gurdial Singh, who joined Onlinejobwork.com about eight months ago: "They would reject the resume correction work that we did on one pretext or the other. After working hard for a couple of months, when I thought I had done Rs 7,000 worth of work, they told me I had earned just Rs 200. This too they did not give me because as per their rules, distributors are given a cheque only if they do work worth more than Rs 500. I did not even get the commission due to me when I made someone a member."

Police investigations have revealed that Onlinejobwork.com was not a BPO and had no collaboration with any foreign company. It had also put up 364 fake identities of 'dream merchants' in the first five levels of their marketing network. This means that the real distributors were placed from the sixth level downwards and all the money that they invested was being channelled to the top five levels, which was the company itself. The company's bank accounts are empty; all the money has been siphoned off.

Artex E-Comm, "the most trusted outsourcing partner for several Fortune 500 mncs for their online data management assignments", run by a relative of Bains, had a similar marketing plan but when the police came sniffing after Onlinejobwork.com, Artex beat a hasty retreat. Overnight the company's office in Chandigarh's Sector 34 transformed into an outlet for diamonds. Tvisha—a new ray of life—was born from the ruins of Artex and is today selling gems. Through yet another MLM network. Director S.S. Sandhu told Outlook he had to close Artex as "we stopped getting work from the US". Besides, Tvisha, says he, is an improvement over Artex as "here we have a concrete product to give our members".

But thousands of Artex distributors who invested Rs 16,500 each have been left in the lurch. Like housemaker Neena Kapur: "I've been doing the assigned work diligently but they never paid me as promised. I managed to get back some money when I went and fought with the director but most of it is lost." Since this is a relatively new concept in India, "there are few checks on the functioning of these companies," says SSP Gaurav Yadav. "Our investigations are only now beginning to expose their dealings, and we are receiving hundreds of complaints against umpteen companies."

"Dreams do come true" is the catchline of Cossets, a department store which is being probed. The company claims to be the fastest-growing MLM network in the country and boasts of 1.5 lakh members all over India. The police raided its premises last month and seized some computers. Two and a half years ago, Cossets began by enrolling members for Rs 6,000 each (it's currently Rs 7,100). Puneet Nanda, managing director, dismisses allegations of cheating: "I can't help it if some networkers are misleading people by making false promises. We go by what is given in the brochures."

The catch here lies in an elaborate set of certificates which the company issues to members, which state that they'll be paid back the amount written on the Certificate of Guarantee Money as per the marketing plan. But those unable to bring new members to Cossets can forget about repayment. Like Rajan Gugnani of Faridabad who invested Rs 1,30,000. He was issued 16 certificates against which he was to recruit 16 new members. He was also to be paid a monthly interest of Rs 4,500 on the invested money. "I could not expand the network and wanted to opt out. But when I went to the company office, they told me unless I brought new members, there was no way I could get back the money. Even the Rs 4,500 interest was paid just for three or four months."

The other lure for members is that they can buy groceries, consumer durables and so on at the company's 10 stores across the country at discounted prices. But as Lt Col Chattar Singh of Panchkula discovered, "many of the products at their store were more expensive than the market".

Worse, the discount which was supposed to be available only to members is now open for anyone who walks into the Cossets store at Chandigarh. Nanda, though, sees it differently. "Ours is a business enterprise, so our marketing plan is designed to ensure maximum sales at our outlets." Meanwhile, investigations continue, but there is little hope that the duped thousands will ever glimpse the money they shelled out.