Our forces uphold our freedoms, but the Naxal is more esteemed? 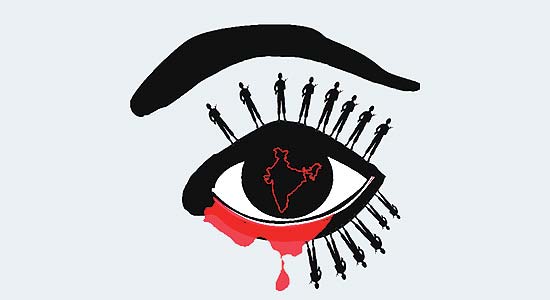 Inspector Frances Induwar’s brutal beheading in Jharkhand followed by the massacre of 17 policemen in Maharashtra —two points in the country’s hinterland almost a thousand miles apart yet united in a chilling display of ruthlessness and reach—once again place the challenge of Naxalism on the Indian state in grim perspective. As a serving police officer, two illusions being harboured about this menace are of grave concern. The first is that within sections of the policymaking establishment, and in popular opinion, we continue to see militant Islam as the graver threat when on the ground it is the Maoist menace that poses a more serious problem. The second illusion is that large sections of our so-called intelligentsia see the Naxal challenge as a problem for the Indian state and its authority and not for civil society at large.

Everyday, on primetime talk shows our intellectuals earnestly explain and equate the actions of our soldiers and policemen with those of the Naxal. A national sense of naivete dominates public discourse about the Naxal menace. Our civil society has always had a bleeding-heart reaction to the sorrows of the world. But strangely, there is scarcely a tear for the widows and orphans of the men who die defending India in the line of duty. Just as Mumbai 26/11 woke up our gilded classes to the dangers of militant Islam, perhaps it will take a siege followed by a massacre in Delhi’s JNU to disabuse our chatterati of their romantic illusions about the Naxal agenda. Militant Islam is easier to demonise because ultimately its roots are foreign. Naxalism deceptively uses the grammar of justice, poverty and empowerment in a manner that leads many in our civil society to embrace it as a righteous cause. How did the defence of a pluralistic, tolerant vision of India acquire moral equivalence with a rebellion based on a murderous ideology, one that has been responsible for some of the most horrific crimes of the 20th century? How did we forget to mourn and avenge our fallen dead?

In these ambiguous times, popular opinion, driven by a 24/7 news cycle, wants untarnished victories and untainted heroes. Meanwhile, the battlefields of 21st century India  turn both bloodier and greyer. The heroes of today are fighting a shadowy enemy that finds shelter in the fabric of civil society. Our soldiers and cops always rise to the national need but given the pitfalls of fighting terrorism and counter-insurgency in a democratic framework, they are seldom given the benefit of doubt. No surprise then that despite all the hype of the coming Indian century, in nine years of the new millennium, large parts of our hinterland are now beyond the writ of the state or the charms of civil society.

How did the defence of a pluralistic, tolerant vision of india acquire moral equivalence with a rebellion based on a murderous ideology?

In the minds of an important section of our intelligentsia, the Indian state can do no right. Some of us are prepared to believe only the worst about those who are ready to die to protect us. To them, a soldier or a cop only deserves fear and loathing, whereas the Naxalite deserves to be treated as a figure of mythical glory. In justifying, and even celebrating the Naxals for killing for their vision of utopia, our civil society insults the memory of the security forces dying every day for the far less glamorous aim of preserving the mundane freedoms of our ordinary life. Our bleeding hearts forget all too easily that it is not the PUCL or the PUDR that really underpin our rights; instead it is the readiness of the men in green and khaki to die for the country that remains the ultimate guarantor of our national freedoms. The liberties enshrined in our Constitution, in the exuberant expressions of our cultural forms, in our creation of wealth and intellectual capital, are all ultimately supported not by pious intent and noble thoughts alone, but by our rugged determination to stay the course and by the steel of our guns and the lead of our bullets.

Our civil society must give up this dangerous flirtation with the ideologies of hatred and murder and must give honest support to those of us who are being asked to make the supreme sacrifice. We must expose, isolate and target the entire spectrum of Naxalite ideology from the militant in the jungle to the ideologues in our midst. There is never any shortage of brave men and women prepared to serve and die for our country. We simply need to make up the shortage of citizens who are prepared to recognise and admire the need for doing so.

(The author, a former student of JNU, is presently SSP Dehradun.)

Fringe In The Middle