Coping With The Cop-Out

It's the referee's job to blow the whistle, but the zeal has to be balanced by a professional touch 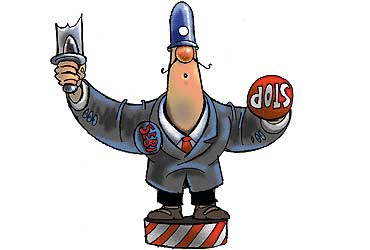 outlookindia.com
-0001-11-30T00:00:00+0553
We couldn't participate in the Indian Airlines disinvestment process because of this," rues Venugopal Dhoot, chairman and managing director, Videocon International. Dhoot is referring to the April 2001 order from SEBI (Securities and Exchange Board of India) forbidding Videocon from accessing the market for three years to raise fresh capital. The company was accused of rigging the market to manipulate its stock price during the 1998 stock market upheaval.

Fourteen months later, on June 20, the Securities Appellate Tribunal (SAT) overturned the SEBI order, allowing Videocon back into the market. Dhoot can finally think about Indian Airlines again, once the divestment process resumes. Even BPL, which had been exiled from the market for four years, was absolved of all charges. Any party aggrieved by any SEBI order can appeal to the SAT for a review.

The story began with Sterlite Industries. SEBI's April 2001 order had banned Sterlite too from the market for two years. The company appealed and in October 2001, the SAT overruled SEBI. So, what was wrong with SEBI's decisions? Why did SEBI act as it did? Couldn't it have been a bit more circumspect before issuing orders that would not stand legal test?

"SEBI had certainly not done its homework well. More, it doesn't have the infrastructure, expertise or determination to carry a case to its logical end," says an angry Kirit Somaiya, president, Investors' Grievances Forum and BJP MP. Somaiya feels that SEBI needs a dose of professionalism with the right experts who can guide it better. That would seem one of the major factors why SEBI faltered.

In the SEBI Act, Section 11 defines everything the regulator stands for. According to this, among others, SEBI's primary responsibility is to protect the interests of investors in securities, and to promote, develop and regulate the securities market by such measures as it thinks fit. Section 11-B empowers SEBI to issue any directions as may be appropriate in the interests of investors in securities and the securities market, after establishing that such action was necessary in the interest of investors or the orderly development of the securities market. However, when one goes through the SAT repeal of SEBI's decision, it's evident that SEBI made a mess of it. Consider the SAT order in the Sterlite case: "Mere surmise, conjuncture, or suspicion cannot sustain the finding of guilt." It threw out the SEBI case because there was no evidence to establish that Sterlite had indulged in market manipulation or violated regulations.

And this is what the SAT had to say in the BPL and Videocon cases. "The market regulator's orders under Section 11 and 11-B of the SEBI Act against Videocon and BPL was not in the interest of investors and had no legal backing." The SAT ruled that "in the absence of sufficient material proof to prove that the two companies had directly or indirectly indulged in market manipulation", SEBI's orders deserved to be set aside. And in the Sterlite order, it said that "not all the King's horses and all the King's men" could salvage Sterlite's loss of image as a result of the SEBI order.

Promoters and officers of a company need to be punished for their role in manipulating share prices of their companies, but is it right to punish the company itself? If protecting the ordinary investor was SEBI's objective, didn't it defeat the very purpose by banning the companies from accessing the market? The decision only hurt the ordinary investor.The fallout was felt soon enough. Share prices of BPL, Videocon and Sterlite started dropping.

However, what's shocking is that SEBI missed out on some painfully simple facts. In its order against BPL, the regulator named Rajeev Chandrasekhar, a non-executive director in BPL who hadn't even attended any board meetings in '98 and '99. As a result, he wasn't responsible for, or involved in, the decisions relating to any operation of BPL or the management of its investment portfolio. Chandrasekhar heads BPL Communications, a company involved in cellular services unconnected with BPL's consumer electronics business. "It appears that SEBI didn't apply its mind to the facts on record," says Somasekhar Sundaresan, legal counsel for Chandrasekhar.

Unfortunately, Chandrasekhar was on the verge of launching two financial services joint ventures at the time of the SEBI order, but they fell through because of the order (globally, securities fraud is taken very seriously). BPL had a one-line comment on the whole episode. "I consider that the company BPL Ltd and its directors against whom the proceedings have been initiated, have been completely vindicated by the SAT order," says N.N. Ranganathan, head, corporate legal, BPL Ltd. In its eagerness to prove that it was not a soft regulator—something it had often been accused of earlier—SEBI may have thrown caution to the winds.

It isn't just these cases which have tainted SEBI. It has been known to reverse its own decisions too. Delhi-based investment analyst Vijay Gaba recalls how SEBI banned short-selling (selling shares without possessing them physically, with an intent to earn profits by buying the stock back from the market at a lower price at a later date) in April '98. The market crashed by 1000 points and, subsequently, SEBI withdrew the ban two months later. "The problem with SEBI," points out Gaba, "is that it has the powers but no accountability. The only responsibility it has to comply with is to publish annual reports."

According to Dhoot, what SEBI did last year was totally unnecessary. "It should work towards finding out whether a company is actually at fault before passing such orders," he says. "Most of the officers in SEBI are from the I-T department," says Gaba. They may have insufficient idea of how the stockmarket functions. Moreover, for evidence, it has to depend on agencies like the enforcement directorate since it doesn't have the powers to search and seize. This malaise of non-performance is present in other agencies too. "There is a certain helplessness. Take the recent Home Trade scam. The CBI wrote to the Seaman Provident Fund saying that it was powerless to bring back the lost money," reveals Somaiya.

So how can SEBI avoid such future embarrassments? How can it enhance its reputation, become an agency known for impeccable judgement? The solution may lie in encouraging self-regulatory organisations (SROS). As it is, one of SEBI's functions is to "promote and regulate SROS". But little seems to have been done by it. Self-regulation typically means the market determines and defines adherence to maintaining standards of best practice. The Justice D.R. Dhanuka Committee on Review of Securities Laws was of the view that "the concept of regulation of professionals operating in the market by their own peers and maintenance of professional standards is better developed through the mechanism of SROS". It added that "the commitment to prevent fraudulent and manipulative practices can be better achieved through this mechanism".

The Dave Committee's Report on Capital Market Infrastructure, five years ago, also agreed with this. In mature markets, points out the Dave Report, regulators don't delve into the details of the functioning of intermediaries (that, however, is not the case in India).Management by exception is crucial for the efficiency of any regulatory institution. The report cites the example of the UK where the Securities and Investment Board (SIB) encouraged the formation of various SROS such as the Investment Management Regulatory Organisation (IMRO), the Securities and Futures Authority (SFA) and the Personal Investment Authority (PIA).

The IMRO regulates about 1,100 fund management firms, while the SFA regulates 1,300 firms involved in the investments market. The PIA regulates nearly 4,000 firms including independent financial advisors who give advice on retail investment products or act on behalf of private investors. Even the US has efficient SROS such as the NASD (National Association of Securities Dealers). The NASD, managed by the sec (Securities and Exchange Commission), is the largest self-regulatory organisation in the US. Its membership includes virtually every broker or dealer in the country. The Indian model of securities regulation is broadly based on the US model.

Among the sro's many functions would be registering all financial intermediaries operating in the securities market, enforcing a strict code of conduct, conducting qualifying exams to test members' professional skills and supervising members' dealings with investors.

But for all its slip-ups, there's no getting away from the fact that SEBI is the regulator. Since inception, it's spent much time firefighting, be it scams, market volatility or market manipulation. But SEBI should decide whether it wants to be a market regulator or an investor protection forum—it can't be both. With SROS in place, it can avoid being investigation agency, judge and executioner all at the same time. And avoid such shocking lapses.