The Indian media's ask-no-questions reporting does not bode well 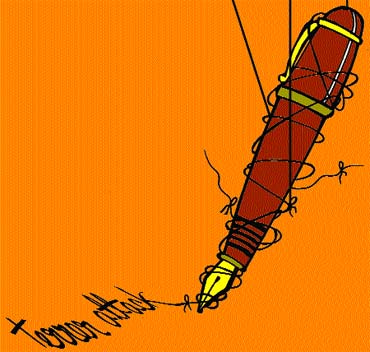 outlookindia.com
-0001-11-30T00:00:00+0553
As news of the unfolding Mumbai terror attacks spread countrywide, shock and horror were woven with sorrow and sympathy here. But soon this empathy began transforming into disbelief. Even before the bloody saga in Mumbai had ended, sections of the Indian media was pointing accusatory fingers at Pakistan, claiming the terrorists had been trained in Karachi.

The terrorists were still inside the buildings, but the Indian media was already reporting on their nationality, the weapons they carried, the phones they were using! Who provided them the information? Could that information be believed? Sure, available information must be provided to the viewer but shouldn't reporters also raise questions arising automatically from the 'information' provided to him/her? Only government channels act as 'conveyor belts', passing on the official version to the people. Here are some vivid examples:

An Indian TV network interviews one of the terrorists holed up in a hotel surrounded by commandos, but no one wonders why his phone hadn't been jammed. And how did the terrorist call the TV reporter? Or did the latter call the terrorist? If yes, then how did he/she get the number?

On the second day of the carnage, an Indian Major General says Pakistan was involved; the Indian prime minister talks of the 'external' forces and the Indian foreign minister insists on Pakistan's complicity. No questions are asked about evidence, doubts raised that the assessments may be premature; not even a suggestion that the possible source of terrorism could be from within India. No one remembered what Jeremy Kahn wrote in the September 29, '08 Newsweek. Kahn reported, "Several people arrested after the Ahmedabad blasts reportedly told authorities they'd attended paramilitary camps in India, not in Pakistan or Bangladesh. Authorities now fear these camps...have trained hundreds of radicalised Indians in the past few years."

No one asked whether the in-depth information the terrorists had about their targets suggested local support. The number of terrorists also kept changing—from eight to 12 to 25 and now, finally, 10. The reportage was incredible. For example, did anyone check how it was possible for Pakistani terrorists to travel in fishing boats for over 500 nautical miles?

The post-blast reporting has been a bit simple—buy the government's version, dramatise it like Hollywood does, and raise questions that the government wants raised. For example, should India attack terrorist camps? On December 2, the host of a CNN-IBN programme, 'Nation's Survival', said, "I don't want to be war-mongering but our question is, should India attack the terror camps?" Some 95 per cent said yes.

Asked by the host of the Dawn News morning show why a section of the press was blaming Pakistan, an Indian journalist gruffly responded, "I think it is very insensitive of those raising the question that why are some in the Indian media blaming Pakistan." And then you had Simi Garewal telling NDTV she would like to see Pakistan carpet-bombed.

One of the Hindi channels said a Karachi-based character, Chacha Rehman, masterminded the Mumbai attacks. Chacha is a character who often finds mention in the Indian press. Don't believe me? In 1999, Rediff (www.rediff.com/news/1999/nov/05blast.htm) reported, "Mohammad Kasim Lajpuria alias Mechanic Chacha, an accused in the sensational serial bomb blasts case that rocked Bombay in 1993, was arrested in Nepal yesterday, almost six-and-a-half years after the incident. Earlier, after being arrested by the Nepal police, Mechanic Chacha was handed over to a CBI team...."

No one even bothers to recall the number of times the Indians have wrongly accused Pakistan of fomenting terror—Chattisingpora, the Parliament attack, the more recent Samjhauta Express blasts in which a serving Indian Lt Colonel may have been involved. But the Indian media, in the service of patriotism, opted to ask no questions.

In Pakistan, we learnt at extremely high cost that the 'ask-no-question' brand of journalism, whether on foreign policy or internal security, ultimately contributes to the creation of the Leviathan, increasingly aided by the 'purists', the militarised and the 'uncompromising' ideologues/communalists. It's this Leviathan that wreaks havoc on the very nation it must protect. The media cannot abandon its role in keeping it in check. We in Pakistan learnt this the hard way. Which is why we are bewildered by our Indian counterparts' ask-no-questions brand reporting of the Mumbai carnage.

At The Edges Of Restraint