A cinema where, in the grand and gentle tradition of India, heritage and modernity, the East and the West, the seer and the upstart converge and collude. 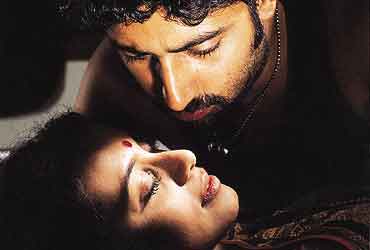 outlookindia.com
-0001-11-30T00:00:00+0553
The more things remain the same, the more they change. The dean and alumni of the Karan Johar F3W Gurukul (Filmmaking By Fusing Formulas That Worked) continue to churn out hit after hit ((Anand + Safar + Bawarchi)/(Dil Chahta Hai style) = Kal Ho Na Ho). Meanwhile, one of the Hindi film industry's most bankable stars, Ajay Devgan, in the last two years, has played a revolutionary, a soulless terrorist, the husband of a possessed woman, a soldier in Kargil, a psychotic murderer, a mafia don, a tough-as-nails cop, an idealistic student leader.

For every Main Hoon Na, there has been a Munnabhai MBBS. For every Masti, a Maqbool.

The Hindi film industry is experiencing a new heady surge of adrenaline. A new generation of filmmakers, scriptwriters, actors, technicians and music directors are drastically amending the constitution of the Hindi film, and much of the time, getting away with it. Of course, they are still in a minority, but they are an increasingly visible and vociferous bunch of dissidents.

And the most remarkable aspect of this budding insurrection is that it is taking place within mainstream Hindi cinema. The scepticism of these new activists is not transporting them away into that ghetto called Parallel Cinema, defined more by what it is not than what it is. These are men and women who are in love with Bollywood's unique and voluptuous narrative and aesthetic traditions, and want to take it forward in ways and directions and dimensions that a new, young, confident globalised sensibility needs and demands. As ideas and techniques and styles and formats clash and coalesce, a new Bollywood is birthing. Let's call it Convergent Cinema. A cinema where, in the grand and gentle tradition of India, heritage and modernity, the East and the West, the seer and the upstart converge and collude.

Convergent Cinema will forge the future.

'There Won't Be Any Friction'