Contessas In The Net

As Lalit Modi’s latest scandalous revelations rock the ruthless, rapacious world of cricket and politics, it has shattered the reputations of two women leaders. 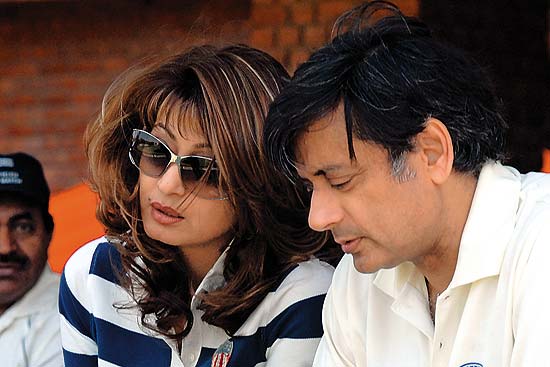 It’s a badge that the former IPL oligarch would never have dreamt to wear—of being a Giant Lady Killer. As Lalit Modi’s latest scandalous revelations rock the ruthless, rapacious world of cricket and politics, it has shattered the reputations of two dynamic and proficient women leaders—Sushma Swaraj and Rajasthan CM Vasundhararaje. But remember, the IPL also first attained notoriety after a pric­kly Lalit Modi tweeted and outed the late Sunanda Pushkar Tharoor in a vengeful spree, after being told to buzz off by her associates in the Kochi franchise. It was to set off a chain of cataclysmic events—from Lalit’s own dishonourable expulsion from IPL, the slew of cases of nepotism and corruption slapped on him, his final exit and self-exile in London, and the tragic, unexplained death of Sunanda Pushkar.

Funny, but the criminality, gossip and infamy of Lalit Modi and IPL seem to have scorched the three ladies more than any of his caravan of fellow colleagues and accomplices, from BCCI moguls and politicians, star cricketers and IPL tycoons—Sharad Pawar, Arun Jaitley, Rajeev Shu­kla, Praful Patel to N. Srinivas, Jagmohan Dalmiya, Sunil Gavaskar, Ravi Shastri...it’s a glittering list. As scandals erupted over the last decade, of the cash-rich BCCI and IPL’s multi-million dollar scams, of cronyism, bribery, racketeering and fraud; court cases and legal suits; rare was a response of accountability, investigation, or fixing criminality. Unless, of course, there was no way out, as the foolhardy LaMo found out.

Yes, Sunanda’s collusion, Sushma’s humanism, Raje’s collaboration were bad calls, but what if they were part of ‘the club’?

So, isn’t it grotesque that as the all-male club of the country’s rich, influential, all-powerful top dogs of cricket and politics schmooze in the ritzy capitals of the world, unscathed and safe in their brotherhood of loyalty and reliability; it’s the contessas who have been caught in the net? A day before she died, it was a distraught Sun­anda who bewailed how she took the rap for her husband Shashi Tharoor in the IPL Kochi sweat equity mess and even threatened to spill the beans to an eager media, but never lived to tell the tale. As Sushma Swaraj battles impropriety and conflict of interest charges for bailing out Modi with travel documents, no one seems to demand why the prime minister, even finance minister Arun Jaitley, is not pursuing Lalit Modi’s corruption cases despite several cases of criminality against him. In Raje’s case, as the scandal implodes about financial deals between Lalit and her son Dushyant, no one has seriously investiga­ted charges of the hook-up between IPL and Praful Patel’s daughter, or of Pawar’s family.

Heck, yes, it’s about gender bigotry in corruption and sleaze, as integrity and principles play out in a very ‘male’ space. There’s no pretending that Sunanda’s collusion, Sushma’s humanism or even Raje’s collaboration were bad judgement calls, they are wilful transgressions; however, what if they were part of the political cabal, of clubbiness and networking? Would they be hounded so mercilessly, foxily nudged by their male competitors in the party? Remember Uma Bharati’s stunning ouster as Madhya Pradesh chief minister on a small ruse? The Modi tangle can also be seen as the party leadership out to teach the two women leaders a lesson—Sushma had made her distaste for Narendra Modi’s self-imposed leadership on the party pre­tty clear. Raje has snubbed the party leadership after her son was denied a cabinet position in Delhi. Guess, to use Hillary Clinton’s phrase, there’s more to changing a headline than with just a haircut!