Is it the end of the road for the Grand Old Party of India? Party leaders speak of the decline, the insipid leadership. 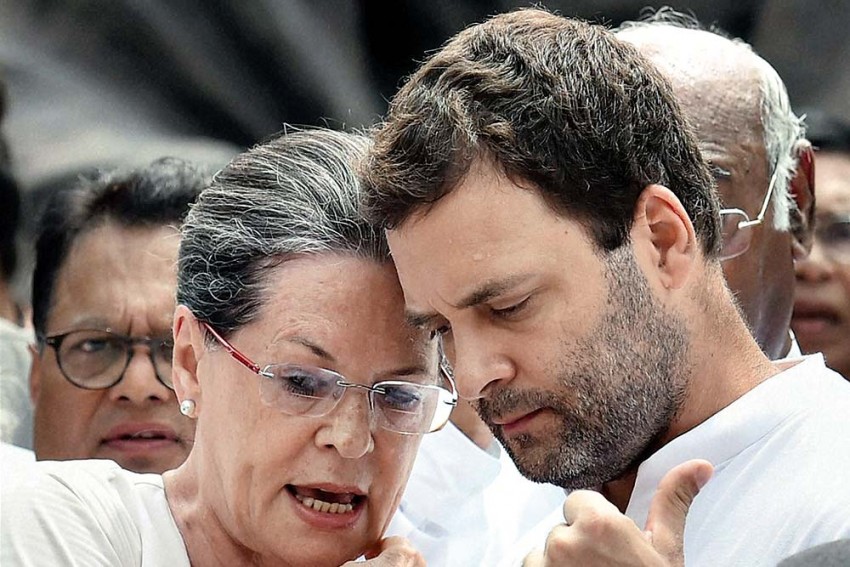 Party chief Sonia Gandhi with Rahul at a protest over suspension of MPs
Photograph by PTI
Bula Devi May 20, 2016 00:00 IST Congressed! 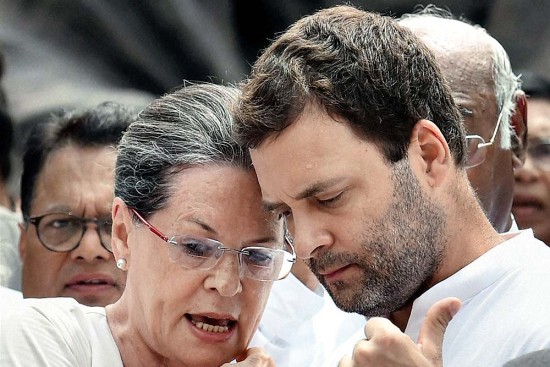 A text scrolling on the official website of the Indian Nat­ional Congress quotes former Prime Minister Dr Manmohan Singh saying, “Congress is like the flowing Ganga, you can do what you feel like, you can never stop it.” But today at the Cong­ress headquarters on Akb­ar Road, the mood is sombre. A senior leader’s attempt to lighten it with a joke amuses nobody. “Journalists have deadlines; we have a deathline,” he quipped.

But the poor joke, made before the results of assembly elections in five states were declared this week, was prescient. The grand old party now rules barely half a dozen states. Barring Karnataka, these are small states. The writing on the wall is grim, but the party lives in a time-warp: this week, its website was still showing a Congress government in Arunachal Pradesh. “Forget winning elections, the party is unable to arrest the menacing growth of the BJP and the RSS,” a Congress leader laments, as others nod in agreement. The consensus, it seems, is: the Congress is in no position to even position itself as a rival to the BJP.

“Rahul made no attempt to shoo away the dog from the meeting,” says Himanta Sarma.

The desperation is evident. Since 2013 Congress has lost state elections in Haryana, Maharashtra, Rajasthan, Jharkhand, Chhattisgarh, Madhya Pradesh, Delhi, Jammu and Kashmir, Andhra Pradesh. Congress and allies were in the saddle in all but MP and Chhattisgarh. And this week the party lost Kerala and Assam as well. At the national level, the party has plummetted in terms of both seats and voteshare—from 424 seats (and a 48.12 per cent voteshare) in the Lok Sabha in 1984, when Rajiv Gandhi swept in on a sympathy wave, to 44 seats (and a 19.52 per cent voteshare) in the 2014 general elections. Clearly, its shallowly tokenist and contrary steps in the ’80s-’90s, from Shah Bano to Ayodhya, harmed it as much as Mandal. Party workers grumble that after the 2014 Lok Sabha debacle, no one has cared to draw up a roadmap for revival. The AICC has not met for two years. Word is that there’s only one copy of the report of the A.K. Antony committee which examined the 2014 debacle, meant only for the high command. Former Uttarakhand chief minister Vijay Bahuguna, who recently joined the BJP along with eight Congress MLAs, says, “The report should have been made public...many of us had deposed before the committee.”

Congress vice-president Rahul Gandhi fails to inspire confidence. “People don’t take him seriously because he doesn’t practise what he preaches,” says Sukhpal Khaira, a former Congress MLA from Punjab who joined the AAP in December.  He says Rahul had promised to bring about a generational change in Indian politics, but points to the contrast: in Punjab, all three top leaders of his team—Amarinder Singh, Ambika Soni and Lal Singh—are around 75. He says he quit the Congress because he saw no hope in Rahul. In Tamil Nadu, disgruntled party workers question the rationale of Rahul insisting that those seeking tickets should first pay Rs 10,000 as earnest money: after all, but for one, all Congress candidates in the 2014 general elections had lost their security deposits! And Himanta Biswa Sarma, former Congress minister of Assam who is now with the BJP, has been regaling interviewers about how, at a meeting which he attended with then Assam chief minister Tarun Gogoi and Assam PCC chief Anjan Datta, Rahul was paying more attention to his pet dog. “You don’t allow your dog into a serious meeting. But he made no effort to discourage the pet or shoo him away,” says Sarma. Pasang Dorjee Sona, a former Congress MLA from Arunachal Pradesh, recalls similar indifference. A group of disgruntled MLAs from the state camped in Delhi for several months, hoping for an audience with either Sonia or Rahul. Neither spared time for them. 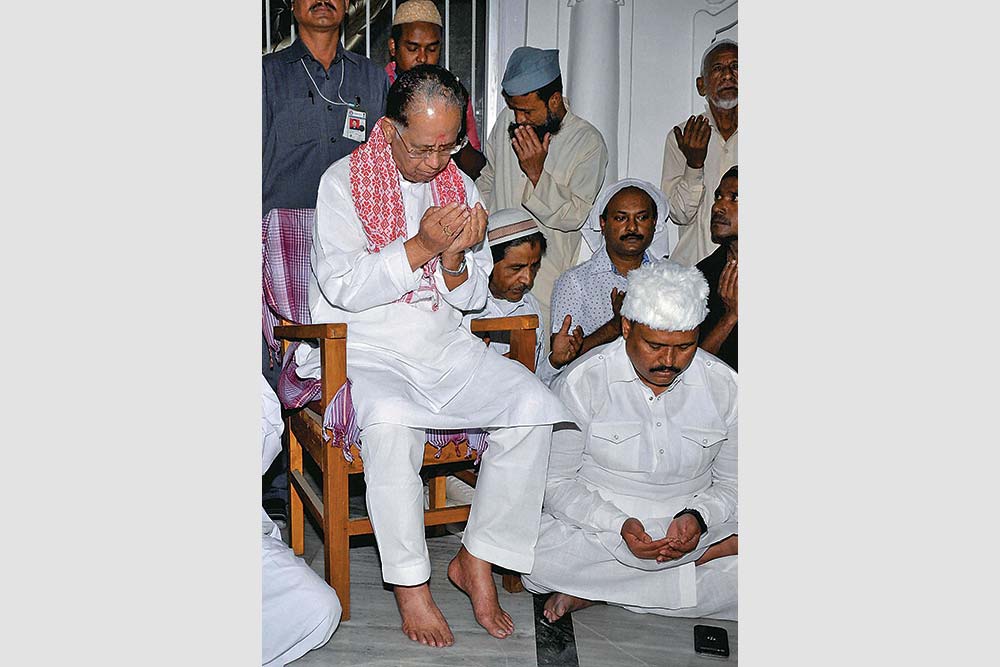 Long-time Congress loyalists find the aloofness of the leadership disturbing—and galling. Some, such as H.R. Bhardwaj, former Union law minister and Karnataka governor, find the party’s courting of reg­ional parties a flawed strategy. “The Congress cannot be revived  by outsiders,” he says, and adds, speaking of the current leadership,“They turn their face as if we have never been in the Congress. We fought for Indira Gandhi, for Rajiv Gandhi, but for the current leadership, we are foreigners.”

Part of the malaise stems from a trust deficit. Sonia and Rahul tend to be wary of strong voices, which is perhaps why they restrict access­—but this breeds dissidence. The Congress general secretaries seem inc­apable of taking decisions on their own. Even their access to the Gandhis seems limited. This imp­ression is confirmed by a former MP known for his acerbic speech and famed proximity to the family: he told Outlook he’d not had a one-on-one meeting with Sonia in six months, and every time he met Rahul, he said ruefully, the vice-president was courteous but made no attempt to have a meaningful dialogue. Bahuguna says he waited for two years to meet Rahul but never got an appointment; now, he’s taken his stake to the BJP. 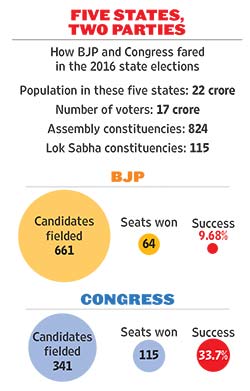 Many leaders confessed that party workers are demoralised because they see no chance for the party. They say it’s not enough to hold an occasional ‘Save Democracy’ rally at Jantar Mantar or for Rahul to travel across the country. Congress workers, they say, are being harassed in many of the BJP-ruled states. “They are annoyed with the Centre of course, but then they are equally angry with the Congress because they have been left adrift with no guidelines,” says one. Bhardwaj does not mince words. While acknowledging that Sonia revived the party between 1998 and 2004, he is categorical that Rahul would not be accepted as the leader. The Congress, he says, cannot be run like a cosy club.

But Gandhi family loyalist and Congress general secretary Digvijay Singh remains unruffled. Before the year is out, he told Outlook, the AICC session would be held and a reshuffle in the CWC too would take place. “There will be surprises,” he told Outlook, possibly hinting at Rahul formally being anointed president. Former Delhi chief minister Sheila Dikshit, too, says, “The Congress is in transition; politics changes and the party is looking ahead to a new era and a new generation.”

All that may be true, but the trouble, acc­ording to most Congressmen, is that Rahul is part of the problem. They say his style isn’t effective in the face of how Narendra Modi, Mulayam Singh Yadav or Mamata Banerjee practice politics. He is well-read, they say, but not articulate enough; he’s slow to react; and his penchant for communicating through text messages and e-mail puts many people off. They also blame him for indecision, inconsistency, arrogance and whimsically shunting out the old faithful. “This isn’t the Congress ethos—the party was always like an umbrella and took all kinds of people along,” says one. “But we allowed Sarma to leave in Assam and Bahuguna to leave in Uttarakhand. Losing Assam is like losing a part of our body.” Most exa­sperating, they say, is Rahul’s lack of aggression and a killer instinct, besides an inability to connect with lower-level leaders.

“For the current leadership, we are foreigners,” says a Cong leader.

They also question Rahul’s organisational skill and ability. Despite Rahul being projected as a youth icon, the Congress suffers from a severe shortage of young, energetic and dedicated youth to connect with people. “We fought on the slogan ‘Congress ka haath/ Aam Aadmi ke saath’, but are we taking up issues that concern the common man?” asks a veteran Congress leader, who feels the party is too full of people of the “same kind”. There are those who say relying on faces from different communities is giving diminishing returns. “We have Meira Kumar, Ghulam Nabi Azad—and the AICC is full of Brahmins only,” chuckles a leader, pointing out that none of these so called leaders command much support in their own communities any longer. Another spoke of the need to make it known that the UPA government had fared much better than the current NDA government. “We need to hit the streets to convey that, but we haven’t done enough,” says a leader.

Some Congressmen feel the party needs a fresh, more appealing raison d’etre. Being just pro-poor, liberal or secular is not enough, they say. “The street today has undergone a change and is not the same as in 1974,” one of them says enigmatically, while his colleague admits the party was getting nowhere by chucking out old faces and replacing them with new ones. Tokenism and doles would not work, they suggested, but were unable to state clearly the alternative they desired.

Is Rahul’s political style too alien and detached? Former chairman of the Karnataka Legislative Council and KPCC vice-president Prof B.K. Chandrashekar says, “Whatever else it might be, his politics is certainly not ‘European’. Leaders there wouldn’t have led a strident campaign against the NDA’s land acquisition bill; his visits to the Central University of Hyderabad and JNU helped galvanise students throughout the country and his jibe at ‘suit-boot-ki sarkar’ is also understood clearly by the masses,” he points out.

Yes, says a former Union minister. “Those who claim to be disillusioned with the party and the leadership are the biggest beneficiaries of the party and yet they are at the forefront of grumblers,” he says. He suggests that the party go for a purge and even dares the leaders who are unhappy to leave—but he hastens to add that he wants to say this anonymously.

Chandrashekar acknowledges that the road ahead is tough. The Congress, he believes, ought to develop a cadre of its own rather than rely on mass mobilisation. The party will have to take up issues with far more persistence and keep party workers active. Too many big and formal meetings, in which leaders address the converted, should give way to smaller, panchayat-level meetings.

MP and national spokesman Rajeev Gowda, however, remains hopeful. “We had 15 years of incumbency in Assam and in Kerala, historically, there has been a cycle. The BJP did very well indeed in Gujarat, Maharashtra, Rajasthan and Madhya Pradesh. But in the next round the only way they can go is down and the only way we can go is up,” he says. Sheila Dikshit is more defensive on the future of the grand old party. “The Congress cannot be written off; it is more than a cent-ury-old party after all,” she says. It’s brave talk, but that alone cannot revive a party that seems on the wane—and has been waning for some time now.

The story has been edited