Congress, JD(S) Tie Up To Take On BJP In Lok Sabha Polls

This is the first time the Congress and the JD(S) will be facing a Lok Sabha election as pre-poll alli­es. By most accounts, it’s a tricky task. 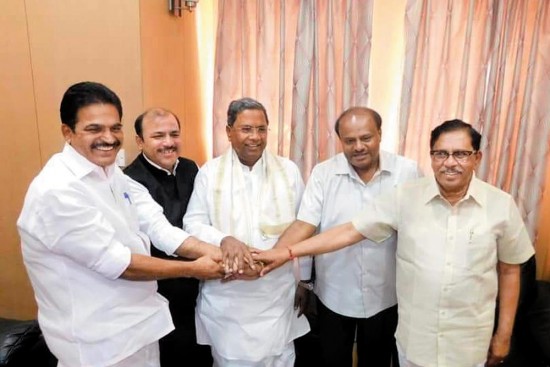 As they got down to details of a possible seat-sharing formula, Karnataka’s coalition partners, Janata Dal (Secular) and Congress, both pointed out that they would be flexible with the negotiations. The two parties successfully fought by-elections together a few months earlier and they are also used to various local pacts. But this is the first time the two parties will be facing a Lok Sabha election as pre-poll alli­es. By most accounts, it’s a tricky task.

Tricky, because the Congress has a wider presence across the state while the JD(S) is firmly entrenched in southern Karnataka. In many of the 28 Lok Sabha seats in the state, especially in the northern districts, the smaller party is not much of a factor, says political commentator Narendar Pani. “So, we are talking about, maybe, 10-12 constituencies where the Congress and JD(S) are the main rivals,” he says. Both parties will look to protect their turf, being wary of ceding ground to the other.

Last weekend, JD(S) sup­­­remo H.D. Deve Gow­da indicated that his party has asked for 12 seats. “But I will also not be rigid in saying that they should give us 12,” the former prime minister said, adding the Congress too ought to be flexible. A co-ordination committee meeting in Bangalore rem­ained inconclusive. “If you look at the public statements, they are striking a conciliatory note. But that doesn’t mean there’s no tension,” says Bangalore-based political analyst A Narayana. “The JDS is asking for seats which were won last time by the Congress.”

In 2014, the BJP won 17 of the 28 seats in Karnataka while the Congress held 9 and the JD(S) won in Mandya and Hassan, a Vokkaliga stronghold. These two seats have garnered much of the attention in recent weeks with local Congressmen demanding that their...