Confessions Of A Dangerous Mind

The film does not offer any explanations. Instead, it intrigues more. 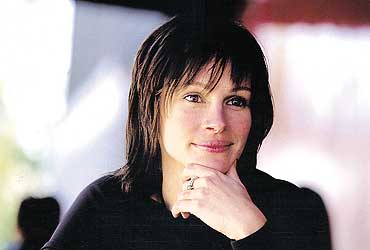 There's more to George Clooney than sexy Dr Doug Ross in ER. Hollywood's ultimate posterboy makes a remarkably intelligent and engaging directorial debut with Confessions of a Dangerous Mind. Instant comparisons can be drawn here with To Die For. Like Gus Van Sant's Nicole Kidman-starrer, Confessions... too takes delicious potshots at America's hyperkinetic showbiz and puerile pop culture. And its pathological obsession with "quelling Communism and making Democracy gain foothold in the world".

The film's based on the autobiography of the American TV producer of the '70s, Chuck Barris (Rockwell), who created schlock TV with insidious shows like The Dating Game, The Gong Show and The Newlywed Game. He also claimed to be an undercover CIA assassin. Did he really do it or was he just bragging? Were Barris' claims mere delusions of a sick mind? Did the schizophrenic existence emanate from a larger sense of inadequacy and failure? Barris describes it as an "unflinching record of a wasted life". The film doesn't offer any explanations. Instead, it intrigues more. Clooney's Barris might remain elusive, but his film is at once assured and audacious, dripping with splendid sarcasm.

The restive narrative moves between fantasy and reality, between the vulgar sets of TV gameshows and the grimy, noirish scenes of crime. Clooney intersperses the action with interviews with real-life TV personalities to give the film the feel of a TV programme. It has tremendous style and a compelling mood, some wonderful images and set pieces and wicked, outrageous gags. "You're 32 and have achieved nothing while Jesus Christ had been dead and resurrected by the time he was 33," the cia man (Clooney) tells Barris. There's a hilarious scene where the Federal Communications Commission official warns the gameshow participants against making lascivious, subversive, "Un-American" remarks on TV. Did Barris lower the bar of TV or was it to do with the "Americans waiting to be on TV and making an ass of themselves"? Fittingly, the film ends with the birth of a new gameshow where three men with loaded guns look back at their lives and the one who doesn't blow his brains out is declared the winner.