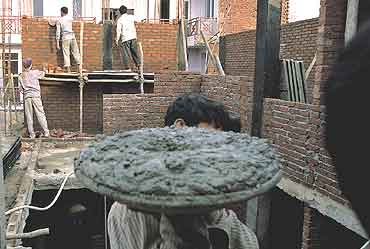 outlookindia.com
-0001-11-30T00:00:00+05:53
Anil Singhvi is an avid tabla player and devotes whatever free time he has, at least a few hours every Sunday, to this pursuit. The last month and a half though, he says, he was on a different beat, one necessitated by his responsibilities as the executive director and head of finance at Gujarat Ambuja Cements Ltd. During this period, he may have strung together a composition whose chorus is more riveting than the lead vocal, the side strains more mellifluous than the central piece.

The idea is not to undermine the central piece. The elaborate tie-up that Gujarat Ambuja has forged with Holcim Ltd, the world's second largest cement company, will eventually give the Swiss company control of ACC, India's second largest cement company, at a cost of $800 million (see box). It is the biggest acquisition of an Indian company by a multinational, a watershed.

More significantly, however, Singhvi, who steered negotiations on GA's behalf, even as Holcim was aided by investment bank DSP Merrill Lynch and law firm Amarchand Mangaldas, has made the best of a potentially sticky situation.

For those who came in late, GA was a prime mover in the first round of cement consolidation in 1999-2000. It had then thwarted Lafarge, which, having acquired Tata Steel's Singhbhum cement plant and Raymond's at Bilaspur, was looking to spread its tentacles further. GA moved quickly to snare Modi Cement and DLF Cement, the latter virtually from under Lafarge's nose, and a 13.8 per cent stake in ACC from the Tata group. Since then, with FIs being the other major shareholders in ACC, GA has been India's most influential cement company along with AV Birla group's Grasim, which has taken control of L&T's cement division, rechristened Ultratech Cemco.

The ACC deal, however, was turning out to be more than chewable. GA had acquired the stake at Rs 370 a share, three times the prevailing market price. Yet, it did not show any intention to take over the company and kept its holding just below the open offer trigger of 15 per cent.

According to analysts, GA's primary reason for buying into ACC was to bring price discipline in north India where the two control 80-90 per cent of the market. That was achieved some time ago. Merger was an option, but perhaps only in theory. Analysts say that would have had a "diluting" effect on shareholders.

GA couldn't have let status quo continue forever. With the cement industry looking up, ACC would certainly have become a takeover target, most likely of an overseas company. What's more, AIG and Government of Singapore Investment Corp, the private equity investors holding 40 per cent of Ambuja Cement India Ltd (ACIL), through which GA controls the ACC holding, had been clamouring for an exit. Gaining full control of ACC would have put too substantial a financial burden on GA.

"To integrate ACC with its own operations, Gujarat Ambuja would have had to shell out the kind of money that Holcim is talking about now. The returns may not have been sufficient," says Sudarshan Sampathkumar, partner, Accenture India.

This deal has changed all that. Once Holcim's subscription of ACIL's preferential issue and ACIL's open offer for ACC are through, GA will hold 33 per cent of ACIL, which in turn will control 50 per cent of ACC. Thus, without spending a penny, Gujarat Ambuja's holding in ACC will increase from 8.28 per cent (60 per cent of 13.8 per cent) to 16.5 per cent (33 per cent of 50 per cent). "All along, we had no wish to take control of ACC. Over a period, our balancesheet may not have been big enough to absorb that," says Singhvi.

GA is also likely to get the rub-off of Holcim's best practices, technology and R&D, such as in the area of alternative fuels. "Gujarat Ambuja seems to have done a very good deal. They have increased their ownership, effectively, of ACC without spending any money," says Promeet Ghosh, senior vice president for investment banking at DSP Merrill Lynch.

Looking a little beyond, the deal is a definitive recognition of the Indian cement industry's dynamics. The valuation of about $100 per tonne is a healthy increase over the $82 a tonne that Grasim paid for Ultratech and the norm of $70-75 per tonne in the last round of consolidation. That is not merely because of ACC's second biggest capacity, well established brand or pan-India presence. It is also because Holcim is buying into a boom.

Demand for cement in India, about 115-120 million tonnes a year now, is projected to expand by 10 million tonnes every year as the government seeks greater investment in infrastructure and faster economic growth generates higher demand for housing. As an indication, cement sales in the country grew 9.7 per cent in December to 10.83 million tonnes.

The Holcim deal may well become a benchmark. Any further consolidation in India's highly fragmented cement industry—at the last count, there were about 50 manufacturers, several of them with small capacities of 1-2 million or less—may command a valuation in the region of $85-90 a tonne.

The only sour note has been struck by the stock market, which has given a thumbs-down to the deal by hammering down the prices of both ACC and GA. It could be because GA appears to have yielded ground to Holcim, a rival. "People were unhappy even when Madhuri Dixit married an unknown doctor. People said it will not last," says Singhvi, pointing out that Holcim is committed to making all its future moves in India through its partnership with GA. What these are likely to be, he wouldn't say. "It is like asking a couple the morning after their wedding when they will have a baby, and whether it'll be a boy or a girl," says Singhvi, happily married since 1985.

There had been increased activity on the ACC counter since December 2 last year. That day, there was trading worth Rs 680 crore in the scrip in nse's derivative segment, where smart money is more apparent. It seems the market expected an open offer at Rs 420-450 per share. "Maybe there was an expectation in the market which was not in line with what came. The transaction value is so good I don't want to read too much into the market's reaction," says Ghosh. Singhvi, too is unperturbed. "Punters buy on rumour and sell on news," he says, speaking, once more, like a finance professional.