A new army history revisits its Raj past critically, the orthodoxy isn't amused 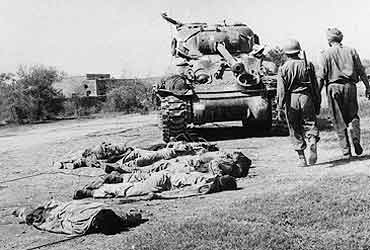 outlookindia.com
-0001-11-30T00:00:00+05:53
"The conduct of the whole battalion throughout the mutiny was most praiseworthy; they guarded the civil treasury and opium godowns until the arrival of the European detachments and by their loyal bearing kept in check the bad characters of the city of Ghazipore."
—The Official History of the Jat Regiment, by Lt Col W.L. Hailes and published by Jat Regimental Centre, '67

India may well have become independent in 1947, but its army still remains rooted in the days of the Raj. In fact, the army's obsession with its colonial past is intriguing to say the least. What else can explain why General J.J. Singh, then GOC-in-C, Western Command, had to travel to London with his wife in July 2004 to attend the final meeting of the Mahratta Light Infantry Regimental Association. Days later, when the news of the meeting was discussed on an Indian website, a participant asked: "Why does the Indian army persist with some of these 'traditions' when the same has been discontinued in the UK and elsewhere? I can see the value of tradition in some cases but to stubbornly stick to archaic traditions is, frankly, disgusting." 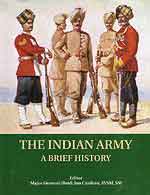 Now, The Indian Army: A Brief History, published by the United Services Institution's (USI) Centre for Armed Forces Historical Research (CAFHR) has reopened the debate on the colonial legacy by offering a new 'heretic' approach to the issue. It's a response to the question many had asked for years: does it make sense to draw links to colonial times when the Indian army was raised to subjugate local kingdoms, defend the British empire?

Till now, with no detailed official history, the Indian army had continued to draw inspiration and identity from a bevy of regimental histories published by the respective centres. Little wonder then that the official history of the Jat regiment continues to state with pride that "the second battalion, belonging to the Bombay Army, was not, at first, involved in the (sepoy) mutiny, but took an active part in restoring order". While post-Independence history has now dignified the 1857 Sepoy Mutiny as the first war of the freedom struggle, within the regiments, the army is in suspended belief that it merely represented a major disciplinary problem. Be it the Jat regiment or the Sikh, Rajput or Rajputana Rifles, nearly all single-class regiments and even others such as the cavalry and engineers continue to draw their identities from the colonial past. Along with the inherited identity have come certain practices such as the detailing of helpers (orderlies) to the officer cadre, which, critics say, is out of sync with independent India's egalitarian values.

"How can you have a debate on whether it was the war of independence or a mutiny?" asks historian Prof Bipan Chandra. "I understand the soldier's first loyalty is to his regiment but I see no reason for the regiment to trace its history back to the 19th century. Why can't we accept that the history of the post-independent Indian army began on August 15, 1947? It is wrong to trace our history from colonial times as if it is in continuity," he says.

But true to its orthodoxy, army HQ withdrew fiscal support mid-way when the USI was planning the publication of the present volume, fearing it would sully its image. (A severe resource crunch was the result.) Perhaps the army became wary as the authors were re-looking at contentious issues like the 1857 mutiny and the Indian naval mutiny of 1942.

According to sources, the project was originally sanctioned Rs 2.5 lakh. But this was withdrawn when differences arose over the draft sent to army HQ for approval. Finally, the army did agree to pay Rs 30,000—but that too never came. Ironically, this was the first venture of CAFHR, set up by the three services to promote research in military history.

Those who defend the colonial past say with history comes identity. This is something successive generations within the Indian army have defended as a quality intrinsic to morale and motivation. "The identity of a soldier and the officer is merged with the identity of his regiment," says Lt Gen V. Raghavan (retd), author of Punjab Regiment: By Land And Sea and Infantry in India. Prof Stephen P. Cohen, a long-time South Asia observer, has dealt with similar issues for decades. In a paper published in 1969, 'The Untouchable Soldier', Cohen pointed out that the British, "relatively weak and powerless, and desperate for manpower, took into their armies any Indian who was willing to serve".

However, this changed after the Peel Commission, set up after 1857 to reorganise the Indian army, put forth its recommendations and established the divisions between the so-called martial and non-martial races. Cohen questions the "uncritical acceptance of the past and an unwillingness to examine present practices". He also adds that military organisations "are deeply conservative, and need to re-examine their assumptions and systems on a periodical basis, while retaining the historical narratives that do bind officers and soldiers together and strengthen their fighting spirit".

Recruitment to the Indian army continues to be on the lines of class and caste as enshrined post-1857. Raghavan lists the merits of the system. "With this, you achieve homogeneity and ensure unstinting loyalty. If a soldier's behaviour is found unfit in the regiment, the homogeneity also ensures that his reputation will also travel back home because his colleagues in the regiment also hail from the same village or thereabouts. Finally, it also ensures morale because they have common cultural practices."

However, the necessity of re-examining the past has found support in the likes of Maj Gen Ian Cardozo (retd) who edited the USI-published history. "We must question how the British managed to colonise us by using our fighting men and also used them in defending their empire. Perhaps this dichotomy in our history is best summed up by the fact that while the British have recorded the Indian soldier's contribution in, say, World War I, independent India is yet to build a memorial to those who died defending her since 1947."

Cohen finds this unwillingness to critically examine the past worrisome. "Scholars such as Morris Janowitz and Sam Huntington have pointed out that soldiers are not only heroes, they are also managers of violence...mere history and chest-thumping may be fine at the battalion level, but does not make for a modern military." But it seems now that except for the 'drums and trumpets' school, the rest is off limits. According to Cohen, the "unwillingness of the Pakistan army to look backward and apportion responsibility is understandable since it is a military-dominated state. Why the (Indian) defence ministry is afraid of the past is baffling".

Perhaps much can be explained by the fact that official histories continue to be state secrets. Historians such as Mridula Mukherjee from the Centre for Historical Research at JNU are aghast that none of the 'official' papers have been transferred to the National Archives. "How will we conduct research and author alternate readings in India's military history if material is not available?" she asks. It is along expected lines then that famous military units such as the Madras Regiments, in its history authored post-'47 with a foreword by then army chief Gen S. M. Shriganesh, fails to distinguish the patriot from the enemy. It praises the "moral courage of (Robert) Clive" in the Battle of Plassey and describes Haider Ali as the "enemy". For the Indian army, August 15, 1947, was, in many ways, the end of history.

'It's Good That No One Gives Me A Gun'