R.K. Laxman is more than our foremost political cartoonist. He is a national habit. 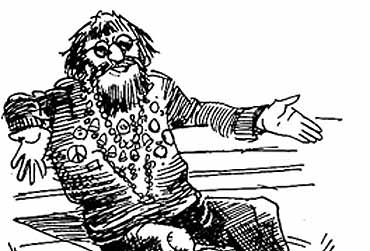 Laxman is no political ideologue or moral evangelist. What drives him is a sense of the ridiculous, a remarkable grasp of the issues of our time and the psychology of our political class. His lines are bold, as Low’s and Herblock’s used to be. The strength of his ideas enables him to dispense with eccentric or bizarre draughtsmanship.

If Laxman has a way with lines, he also has a way with words. He is a superb story-teller and mimic. He also has a third string to his bow—writing, and is the author of a couple of novels and quite a few short stories, sketches and travelogues. His new anthology is a little book which is lots of fun. One short story is as good as any written by his famous brother, R.K. Narayan. It’s about a boy called Gopal who is taken from school during the British days to cheer a visiting Viceroy. While waiting, Gopal gets so involved balancing an ant on a stick that he totally misses the cavalcade. Back home, when his mother asks him whether he had a good look at the Viceroy he says, "No, I was busy."