With the Congress answering Soren with an Uma, democracy is in for a setback 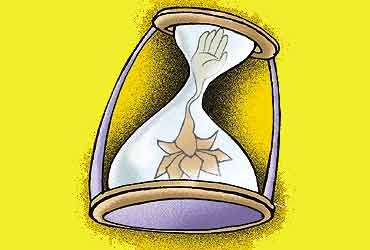 outlookindia.com
-0001-11-30T00:00:00+0553
When the BJP decided last month to use the infirmities of the Indian judicial system to hound the Jharkhand leader Shibu Soren out of office, it neither strengthened itself in Jharkhand nor weakened the UPA government in Delhi. Soren is somewhat of a cult figure in Jharkhand, so arresting him on a 29-year-old case related to his freedom-fighting days, in which his direct culpability is questionable, to say the least, is bound to raise his and his party’s stature in Jharkhand ahead of the assembly elections at the end of the year. So why then has the Congress so gratuitously squandered away the moral high ground that the BJP had gifted it with, by serving an arrest warrant on Uma Bharati, the chief minister of Madhya Pradesh?

If the grounds on which the BJP used its government in Jharkhand to harass Soren were questionable, then those on which the Congress has unleashed Karnataka on Uma Bharati—that 10 years ago she defied prohibitory orders to raise an Indian flag at the Idgah grounds in Hubli—are laughable. Were every politician who has defied a prohibitory order to be arrested, the Lok Sabha would be half empty. The Congress’ motives are transparent: to pay back the BJP in its own coin for what it did to Soren and to do so in a way that allows it to wear its secularism on its sleeve. But in doing so it has not only descended several steps below the BJP, but revealed a capacity for petulance and vindictiveness that cannot fail to sow doubt about its capacity to govern.

This is unfortunately not the first time that the Congress has shown a capacity for score-settling. When the election results came out, and it found that it did not need the support of Mulayam Singh Yadav’s Samajwadi Party to form a government, it went out of its way to insult Mulayam Singh Yadav’s Delhi representative, Amar Singh. This was admittedly a payback for Yadav’s attempt to play hard-to-get with the Congress, when he thought that he might be able to parlay a hung Parliament into at least a deputy prime ministership for himself. But it did reveal a disturbing lack of statesmanship, for by jilting Yadav, the Congress delivered itself bound hand and feet into the arms of the Left. That led speedily to a crisis of confidence in the Congress’ capacity to maintain continuity in the country’s economic policies and a thousand-point fall in the bse share price index, from which the market has only recently begun to recover.

Another example of its eagerness to score points at the expense of governance was the hurry in which the new minister for HRD, Arjun Singh, announced that he would give top priority to ‘desaffronising’ history and other school textbooks. Arjun apparently forgot that the Congress and its allies are not going to stay in power forever. Sooner or later a BJP-led combine will return to office. By his action Arjun has ensured that its first action will be to restore the ‘old’ textbooks. Thus all he has succeeded in doing is to take the next step on the journey to politicising education that the BJP had embarked upon.

The Uma Bharati episode is the third in this series of tit-for-tat moves. It has therefore come when many thoughtful people had already begun to wonder what the Congress party’s true priorities were—whether to govern the country or simply go about settling scores.

The pity of it is that this is happening just when the Congress and the Left have embarked upon the most ambitious, long overdue and humane programme of reform that any government has attempted in the past quarter of a century. This is to give the liberalised market-oriented economy that has come into being over 13 years of economic reforms a human face. Chidambaram and Dr Manmohan Singh have made it clear that this requires not so much a diversion of more resources from basic investment into social spending as a much better use of the allocations that are already being made for both purposes. That requires purging politics of corruption, bringing accountability into the bureaucracy and, not the least, making state governments more responsible to their own people.

This is a monumental task that cannot be achieved without a measure of consensus between the two major parties at least, if not across the entire spectrum of politics. The BJP’s actions, first in disrupting the budget session of Parliament; then boycotting parliamentary committees, and finally in abusing the legal system to persecute Soren, had already made genuine reform and an improvement of governance exceedingly difficult. The Congress did not have to respond in kind and make it virtually impossible.

In their preoccupation with scoring cheap points at each other’s expense, both these parties seem to have forgotten a maxim of politics that was considered a truism half a century ago, when memories of the demise of democracy and the rise of fascism in central Europe were still fresh in peoples’ minds. This is that democracy, which involves substituting the ballot for the bullet, can only function when the level of conflict in society does not rise beyond a level that the system can absorb. By gratuitously stoking conflict over what are, in the end, petty non-issues, the BJP has begun to undermine democracy in India. By paying it back in the same miserable coin, the Congress has taken the process a step further.