That's what the Quran says. So, why do so many suicide bombers get brainwashed? 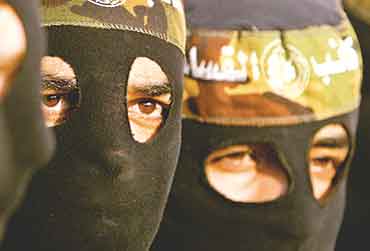 outlookindia.com
-0001-11-30T00:00:00+0553
They see themselves as martyrs and "seekers of Allah". As holy warriors who attain jannat (Paradise) even as their bodies get blown to bits. Yet, if one goes by the Quran, a true Muslim can become a martyr but cannot court a martyr’s death deliberately. Suicide is strictly forbidden by the Quran as it is one of the greatest sins. "And commit not suicide...whoever shall do this maliciously and wrongfully, we will in the end cast him into the fire; for this is easy with God," the Quran says.

Why, then, do so many suicide bombers happen to be Muslim? Does Islam inspire its adherents to the extreme act of transforming their bodies into bombs?

Just as there is fundamentalist Christianity and Judaism, there is a stream of thought that has developed in the Muslim world that provides the ideological base for the violent religosity today described as Islamic fundamentalism. Since there is a perception in many parts of the world that Islam is the problem, many people today open up the Quran and start searching for evidence. But the scriptures of Islam, Christianity and Judaism are like a reflecting pool. One finds what one is looking for. A message of peace or of violent retribution. 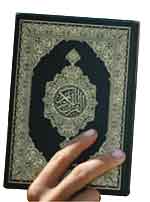 Although suicide is banned, the Quran does endorse violence during war. It says, "When ye encounter the infidels, strike off their heads till ye have made a great slaughter among them." Maulana Wahiduddin Khan elaborates: "The Quran was not revealed in the complete form in which it exists today. It was revealed over 23 years. Twenty of these years were peaceful in the Prophet’s life but for three years he was engaged in war. The revelations made during the years of war have to be understood in a certain context. They do not convey the general command of Islam."

No legitimate maulana, qualified to interpret the holy texts, can argue that the slaughtering of innocent civilians is sanctioned by the faith. Yet, given the conditions in Palestine, Iraq and Afghanistan, there is growing acceptance for suicide bombing as a means of fighting back in an unequal war. Over a year ago, one of the most famous clerics of the Muslim world, the Qatar-based Sheikh Yusuf-al-Qardawi created a stir when he issued a fatwa legitimising suicide bombings in extreme conditions such as those in Palestine. Yet, he could not quote a single verse from the Quran to support his view

Then, on May 19 this year, a group of 58 religious scholars in Pakistan, representing all major schools of thought, issued a fatwa saying that Islam strictly forbids suicide attacks against Muslims and in places of public congregation. However, the religious leaders clarified that this fatwa applies only to Pakistan and those waging jehad and fighting freedom movements against foreign occupants in Palestine, Kashmir, Iraq and Afghanistan are out of its scope. The scholars said they had issued the fatwa because of attacks within Pakistan and propaganda that suicide bombers were brainwashed into believing they would enter Paradise. (Exactly a week after the fatwa was issued, a suicide attack on a Shia shrine, the Hazrat Bari Imam in Islamabad, claimed 25 lives).

Indian maulanas operate in a different milieu. Says Maulana Mehmood Madani, of the Jamaat-i-Ulema-e-Hind: "Under no circumstances can the Sharia condone the killing of innocents. Suicide bombings, whether in London, Ayodhya or Egypt, is not permitted. All individual actions inspired by Osama bin Laden’s ideology are illegitimate." Maulana Jalaluddin Umri, of the Jamaat-i-Islami, explains: "If someone occupies your land, your home, you have a right to fight them. Suicide would result in martyrdom if only the aggressors were targeted. But a suicide bomber killing himself in the middle of a bazaar is not allowed. The Quran clearly states that innocents must not be killed."

Delhi-based Maulana Abdul Hamid Nomani believes that the concepts of jehad and martyrdom in Islam are vastly misunderstood."An individual can become a martyr and attain Paradise if he dies fighting for a just cause. But to wilfully kill yourself in a public place in the name of jehad is a distortion. An individual cannot wage jehad, only a country or a regime can." Besides, as Maulana Wahiduddin Khan forcefully argues: "According to the teachings of the Quran, war must not be waged against the enemy but only against aggressors. Contrary to popular perception, concepts of peace, tolerance and non-violence are highly developed in the Quran."

But this is open to interpretation. The basis for Islamic fundamentalist ideology is the Salafi school of thought followed by, among others, the Al Qaeda. This school believes that Islam is no longer correctly understood since the scriptures (Quran and Hadith) were committed to writing over 1,000 years ago when the Arabic language was different. The Salafis set themselves apart from mainstream Islam and licenced a wide-ranging reinterpretation of the doctrine. They believe that if an interpretation yields success (e.g. suicide bombing inflicting damage on, say, the Americans in Iraq) it is correct. In other words, ends justify means.

The most influential radical Islamist thinker is undoubtedly Sayyid Qutb of the Muslim Brotherhood, who was executed in Egypt in 1966. Considered the father of Islamic fundamentalism, Qutb’s Ma’alim fi’l Tariq (Milestones on the Road) is a bible for Sunni fundamentalists of the Al Qaeda brand. Like a true Salafi, Qutb reinterpreted the Quran and the Prophet’s life. He told Muslims to separate themselves from mainstream society (as Mohammad did during the hijra from Mecca to Medina) and engage in violent jehad.

Sayyid Qutb, in turn, was deeply influenced by Maulana Abul Ala Maududi, the founder of the Jammat-i-Islami in Pakistan (1903-1979). Maududi’s concept of a new jahiliyah (earlier understood as the ignorance and barbarism of the pre-Islamic tribes the Prophet encountered) was radical. Maududi argued that Muslims must wage jehad to fight the new jahiliyah of the West. Sayyid Qutb took the concept a step further when he stressed that jahiliyah existed not only in the West but in Muslim societies too. He urged Muslims to withdraw from the barbarism of modern society and fight it till death. This is precisely what many modern suicide bombers do.

Yet, radical Islam is only a part of the story. Al Qaeda fighters may be well-versed with revolutionary Islamic ideology. But many young Palestinians or Iraqis who become suicide bombers have nothing to do with radical Islam. It is the unequal war waged on so many Muslims that makes their rage and helplessness so potent that they can blast themselves to bits. They are not in a position to launch a crusade or an inquisition as the Christian world had done against Muslims centuries ago. They have to helplessly watch their homes being occupied and kids being killed. In such circumstances, suicide may seem both an act of bravery and an escape. This has nothing to do with Islam or the Quran.

By Saba Naqvi Bhaumik with Amir Mir in Lahore

Lady With The Poison Flowers