Who are these assassins after Musharraf's life? Is it all a ploy? 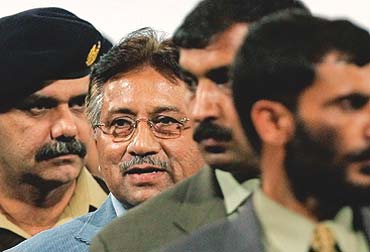 But first, the attempts on Musharraf's life last week. On the night of October 5, a powerful explosion rocked the Ayub National Park, Rawalpindi, a stone's throw from the Army House where the president lives. Twelve hours later, in the early hours of Oct 6, two 107 mm live rockets were recovered a kilometre from the President's House, his office. On October 7, securitymen recovered two more rockets, fitted with launchers and plugged to mobile phones, from a green belt along the Kashmir Highway, close to the headquarters of the Inter Services Intelligence. This is the highway the president takes daily to commute between his residence in Rawalpindi and office in Islamabad. Obviously, officials summarised, the rockets were positioned there to target the president's cavalcade and/or the ISI office.

Partly, last week's reported attempts on Musharraf's life test credulity because these weren't anywhere as serious as the bids on his life in late 2003, says Jamaat-e-Islami leader Syed Munawar Hassan. He explains, "In December '03, Musharraf's convoy was targeted twice by suicide bombers as his cavalcade crossed the bridge leading to Army House." Hassan says assassins are dogged in their approach, risking their lives to get close to their target to kill him. But the blast at Ayub Park wasn't anywhere in lethal proximity to Army House.