Coming Of The Dot Cons

A hard look is required at software firms which could be shell companies for dubious work. 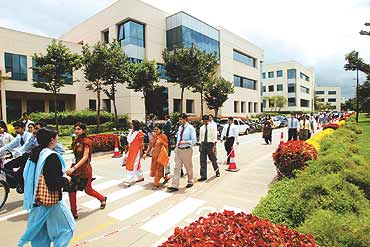 Hassan Ali’s case had a software angle too. Investigators have said that he owned 20-30 software firms in Hyderabad, which were used to launder money through false exports earnings. In fact, there has been a low-key debate for some years that a portion of India’s software exports were ‘unreal’. Let’s start with some startling facts. Sources say that the top 20 software services firms, as ranked by Nasscom, account for over 45 per cent of the industry’s annual revenues (exports plus domestic sales).

Since the Nasscom list doesn’t include companies like IBM, HP and Accenture, who have huge offshore operations in India, one can easily assume that the annual revenues of 25-30 top firms contribute nearly 70 per cent of the industry turnover. As Nasscom has 800-plus members (software services), the average annual turnover for the remaining firms comes to Rs 43 crore. It’ll be safe to then assume that there are hundreds of firms whose revenues are unlikely to be more than Rs 5-10 crore.

In fact, an investigation into software penny stocks in the aftermath of the Ketan Parekh scam (2001) showed that there were dozens of companies that seemed to be shell companies. A visit to many of them in Delhi, Mumbai and Hyderabad showed that they were headquartered in single rooms in filthy commercial centres, and were manned by a single guard. In most cases, the guards admitted no work was done from those offices. In some cases, the nature of work seemed ‘dubious’.

Most of them had an annual turnover of less than Rs 1 crore; in some cases it was just a few lakhs of rupees. Further investigations showed that many software firms are owned by chartered accountants, basically to turn black money into white. A promoter, who misused the Software Technology Park of India (STPI) scheme, explains how software firms can easily be used to launder money, save tax, import unrelated products, and channelise money to other companies, projects, or to overseas bank accounts.

"Firms registered at various STPIs are not scrutinised because of the software hype. So, they can import any products, unrelated to software, at nil duty. It’s difficult to track software exports, so they can show exports on paper and launder money. They can also transfer money anywhere to show as expenses on employees working onsite (at the foreign client’s end). Many builders, traders and politicians have registered firms at STPIs. After being used for a few months to a year, these firms shut down to escape investigating agencies. And new ones are started. The game goes on," he explains.

It continues forever till a crisis confronts the policymakers. The reason for this pre-emptive non-action: the government earns foreign exchange in the case of software exports, it basks in the glory that the economy is doing well if foreigners continue investing in the country’s stockmarkets, and it feels satisfied that the real estate boom is indicative of the growth of organised retail. But what if this house of cards begins to fall?