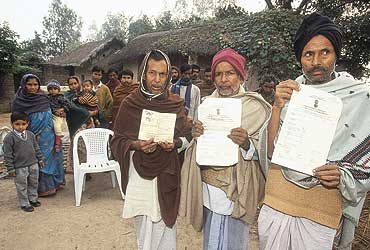 outlookindia.com
-0001-11-30T00:00:00+0553
Squatting on a patch of land outside his thatched hut in Vijaynagar village in the Terai region of Uttaranchal, Kiran Mandal is caught between the frustration and fear that has come to haunt him more than four decades after his parents moved from Chunkuri village in Khulna district of East Pakistan (now Bangladesh).

Mandal and 45,000 others could lose their land and refugee status because of a new identification drive started by the BJP state governments of Uttaranchal and Uttar Pradesh, ostensibly to weed out illegal Bangladeshi immigrants. An estimated 5 lakh refugees are scattered across 36 villages in the Terai. The local administration maintains that there is an estimated 45,000 illegal-immigrant population here. This is hotly disputed by the locals. "This is not right. We are being confused with illegal migrants. We are refugees and no different from the Sikhs who came here from West Pakistan. Why should we leave?" asks Mandal, adding, "No one ever thought it would come to this."

Last fortnight, Mandal was part of a massive rally which terminated outside the office of the sub-divisional magistrate (SDM) in Rudrapur town to protest against the identification campaign. Those attending the rally were severely critical of political parties, particularly the BJP, for failing to safeguard their interests. Says local leader Chittaranjan Raha: "We will have to take the battle right outside Parliament. If the government does not grant us citizenship, we are completely doomed. Many of us who came more than 30-40 years ago will have a lot of difficulty to produce proof of the date of our entry into India."

Raha blames everything squarely on the ruling parties in the two states. "The BJP sees all Bengalis as Bangladeshis. When the Congress ruled UP, the government launched a major initiative to fill up citizenship forms. But today, the same forms are heaped in a corner of the SDM's office and peons often use them to light comfortable bonfires."

Locals agree. Even the district administration record admits that though there is a sprinkling of illegal immmigrants in the region, the majority are Hindu refugees who crossed over to India in the late '40s, early '50s and after the 1971 war which led to the formation of Bangladesh. Many are second-generation migrants—more Indian than Bangladeshi.

But what prompted the two states to begin this drive against illegal immigrants? The official line is that it was initiated following a directive from the Union home ministry demanding a detailed list of illegal immigrants to facilitate preparation of the new electoral rolls. Another story doing the rounds is that the home ministry—piqued at the continued harassment of Hindus in neighbouring Bangladesh (especially after Khaleda Zia's Bangladesh Nationalist Party swept the polls)— wanted immediate identification of all illegal Bangladeshi immigrants in the country.

It was Uttar Pradesh chief minister Rajnath Singh who kicked off the campaign by issuing a notice in all Lucknow-based dailies, saying a detailed investigation had been ordered to ascertain the number of illegal immigrants in the state, especially those living on the Uttaranchal border. This was followed by a notice issued by the Uttaranchal government which stated that all Bangladeshi refugees who came to the state after 1971 would be declared illegal immigrants and deported.

Officials in the local administration admit that a large section of the refugees did submit all documents and papers asked for when the previous Congress government launched a citizenship drive. But that happened more than a decade ago. Since no citizenship cards were issued, the majority of the refugees hold cards issued by the former Uttar Pradesh government, identifying them as refugees who came from Bangladesh after the Partition and the 1971 war. Others have papers which show their original locations in Orissa (Malkangiri/Koraput) or Madhya Pradesh (Manha near Raipur, which is now in Chhattisgarh). All this only consolidates the evidence that they are refugees and not illegal immigrants.

But what are the criteria to determine the status of these refugees? The only document which most of the refugees have—after more than four decades in India—is a small scrap of paper that simply identifies the person and mentions the duration of stay (either three or four decades) in India. But surprisingly, despite acknowledging their extended stay which would qualify them for citizenship, the paper has this crucial line: "Yeh Bharat ke nagarik nahin hain (He/she is not a citizen of India)." All those with this identification paper are now being categorised as illegal immigrants.

But why is a predominantly Hindu refugee population being targeted by two BJP governments? One reason could be that those in the hills have been pressurising their governments to oust the refugees so that they could take control of the fertile Terai land. Another factor weighing against the refugees is that they have been traditional Congress supporters.

Says Dr Sunil Kumar Haldar, who has studied migration trends across the country: "This is a volatile situation in Terai, similar to Assam. Once a significant section of these people are uprooted, they will land in West Bengal because that seems to be the only alternative. The Left Front government may initially agree to accommodate them but later its own police would ensure a second dislodging—as was the case with Bengali refugees from Assam settled in the Sunderbans in the '80s."

Dr Haldar, the only Bengali to have fought an election from the region (his 55,759 votes making him the second highest loser in the state), confirms a larger political conspiracy against the Bengalis of the region. According to him, they, along with the Sikhs, developed the region as the most sought-after agricultural base in Uttaranchal. The Terai region has as many as 370 rice mills and contributes nearly 15 per cent to India's total rice production of 130.5 million metric tons. The region, populated mostly by descendants of immigrants from erstwhile West and East Pakistan, ranks as the most prosperous agricultural base in the state.

Says Dr Haldar: "We have no trouble with the Sikhs but there are constant tensions between us and those from the hills. The only answer to the current crisis is a collective response. We need many more rallies so that our voices are heard."

Despite the protests, state government officials in Uttaranchal and Uttar Pradesh remain unperturbed. They say they have been given a task and they will execute it. Says an official at the SDM's office in Rudrapur: "It is for the two state governments to decide whether they want to issue citizenship certificates to the refugees and grant them SC/ST status. If that does not happen, the process could be painful for many of them. But we can't help it."

By all reckoning, the refugee issue, if not resolved, could snowball into a crisis. West Bengal's Left Front government has already taken up the issue with the state governments of UP and Uttaranchal.It has also announced its decision to send a fact-finding mission to Rudrapur in mid-December. That apart, the refugees have also managed to rope in former Uttar Pradesh chief minister Narayan Dutt Tiwari to champion their cause in New Delhi. Tiwari, who has already raised the issue twice in the ongoing winter session of Parliament, is expected to meet Prime Minister Atal Behari Vajpayee to apprise him of the situation.

But the main anxiety of the refugees of Rudrapur is that one lone voice may not be enough. As of now, the region has thrown up no leaders who can take up their cause. With elections in UP and Uttaranchal just three months away, many of the refugees who have voted Congress in the past fear they may find themselves rendered homeless.