A novel twist to the world of images. Now in India, as a genre-blurring trend. 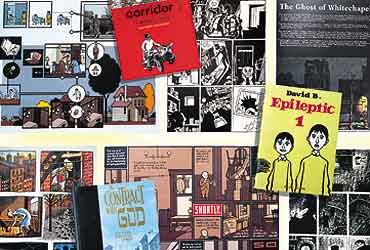 outlookindia.com
-0001-11-30T00:00:00+0553
A new term's booked space in the dictionary of Indo-Anglian fiction: the graphic novel—i.e. a novel-length comic book that aims to be "serious literature". Sarnath Banerjee's Corridor, currently making waves in literary circles, is the first example of a mainstream publishing house testing the waters for the medium in India and thus joining the $100-million global market.

The term graphic novel was coined by Will Eisner, a writer trying to persuade his publisher that his book (1978 classic, A Contract With God), was no ordinary comic book. But graphic novels were thrust into the literary limelight only in 1992, when Art Spiegelman's Maus, an Animal Farm-like take on the Holocaust, won the Pulitzer. Since then, biographies, literary novels on every possible theme, academic texts, historical fiction and non-fiction—from the Bible to The Hobbit—have embraced the format.

And graphic novels are the fastest growing phenomenon in global publishing. They are reviewed in the New York Times and The Guardian. Joe Sacco's journalistic graphic novel Palestine featured an introduction by philosopher Edward Said. With recent large-budget films like Road to Perdition, From Hell and The League of Extraordinary Gentlemen, graphic novels have even reached mainstream mecca—Hollywood.

Serious, lengthy comic books have been made by Indians before, notably Orijit Sen's 'comix' about the Narmada movement, the River of Stories (1994). But Banerjee's work highlights the growing relevance of comic books as a legit literary medium, moving beyond its traditional roles—humour, action, fantasy.

Corridor's plot sounds like a standard Indo-Anglian novel, centering around a second-hand bookstore in old Delhi where a variety of eccentric souls converge in search of anything from Keats to aphrodisiacs. Banerjee is currently working on another such novel, which examines the eccentricities of 19th century Calcutta, with its zebra-drawn carriages and hemp smoking clubs. "I'm fighting a very rigid literary hierarchy in India," he says, "maybe open-minded readers will buy it."

According to Sen, "the urban subcultures that create a market for graphic novels aren't as developed in India as they are abroad, which could be a serious problem". So why publish a graphic novel in India? V.K. Karthika, Banerjee's editor, feels the logic is very simple,"The graphic novel has done well all over the world, so there should be enough readers in India if the book is good—also, in an increasingly visual world, this is a very relevant medium." However, the response to Corridor will be a big factor in deciding whether or not to do more in this genre. For Indian graphic novels to take off, says Banerjee, "what's important is that talented and interested designers and artists are drawn away from animation sweatshops and trained in comic creation—we have no shortage of writers."

But while intellectuals debate over the multiplicity of perspectives of text and image, the philosophical significance of gutter space (the space between two comic panels) and the haiku-like imagery of dripping blood in Japanese graphic novels, India's comics scene is thriving at the ground level. Over the last three decades, Diamond Comics, Raj Comics, Tinkle and Amar Chitra Katha have established vast distribution networks countrywide and are read by lakhs of children in a wide range of languages. But with the exception of Amar Chitra Katha, these are, according to Sen, "of the lowest order in both form and content." The storylines are mostly hackneyed and derivative, and the English translations usually atrocious. Here's a quote from Raj Comics' website, for example, describing their Amazonian superheroine Shakti—"Wonder woman and joker are her villains. The only tell tale sign of this phenomenon is the eye mark on ordinary chanda's fore ford which she keeps well covered with a hear band pretending permanent migraine."

Now Gotham Comics, a US-based company with offices in India, is looking to change the picture completely. It's distributing comics made by international comics powerhouses like Marvel, DC and Cartoon Network all over Asia—which gives them access to over 10,000 well-known characters. And with a monthly reader tally in India of two lakh already, the company seems to have cashed in effectively on the high recognition factor of American comic characters from Spiderman to Scooby-doo.

Gotham has also realised the value of local content—it's set up Indian workshops to develop comics set in India, based on Indian themes, and is even planning a historical/mythological series to take on the ever-popular Amar Chitra Katha.

The direct inspiration to develop a distinctly Indian style may be the success of manga, or Japanese comic art, which is not only read by nearly every Japanese citizen, but also rivals traditional American comics in markets worldwide. With distinctive artwork based on centuries-old traditions and a cinematic narrative structure currently in global focus thanks to films like Kill Bill, manga (capricious pictures), especially shojo manga aimed specifically at girls, is the biggest growth area in international publishing. Could there be a big market for an Indian equivalent?

"Certainly not in the present circumstances," says Dheeraj Verma, an artist who has worked with Raj Comics for 10 years and aims to work for Marvel. "Indian artists are underpaid and hence disinterested. There are talented artists, but without proper training and royalties, they're going nowhere." Asked to name their favourite comic hero of Indian origin, both Verma and Banerjee picked Indrajal Comics' Bahadur, the orange kurta-clad action hero with Neetu Singh-lookalike girlfriend Bela. But, feels Banerjee, there's no genuine indigenous comic book tradition in India outside West Bengal and Kerala, where local comics have distinctive and original artwork.

Sharad Devarajan, CEO of Gotham (a dream job description for any Batman fan, surely), believes India is about to enter a golden age of comics. The original golden age was when the medium exploded into mainstream popularity in the US, from the late '30s to the '50s, beginning with the release of DC Comics' Action Comics No 1 (1938), in which Superman made his debut, and Marvel Comics No 1 (1939).

Golden age or not, with the arrival of the graphic novel, comics in India have finally straddled the entire spectrum. The next step would therefore have to be international recognition—the growing importance of Indian communities in major markets could soon lead to comics aimed at Indians abroad (and the creation of Indian superheroes, like black, Latino and gay ones who find large numbers of readers). And after that breakthrough comes, growth should be faster than a speeding bullet.