Come On, It's Not As Bad As That

When the sun rises in the east, it's the West that has to worry about the darkness. Why be glum, Mr Jha? 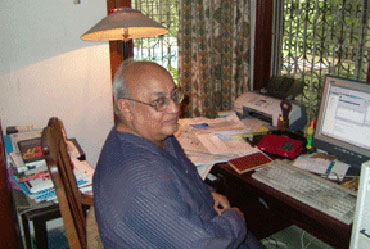 The Twilight Of The Nation State Globalisation, Chaos And War
By Prem Shankar Jha
Vistaar/Sage Rs: 480; Pages: 372
Unlike poetry, economics is not a 'gay science', said Thomas Carlyle. Not even just a "dreary, desolate and quite abject and distressing one". Rather, said Carlyle famously, economics is "what we might call the dismal science".

Economists have long argued why Carlyle took such a dim view of their discipline, often blaming it on the pessimism of 18th century English economists like David Ricardo or Robert Malthus about the prospects for sustained growth.

But, if anyone has any doubt why economics is still called a "dismal science", all you have to do is pick up Prem Shankar Jha's latest offering, The Twilight of the Nation State: Globalisation, Chaos and War. Jha is a cherubic, bubbly, cheerful sort of person who knows how to laugh. So, it's not clear why he's written a book that ends with a last chapter ominously titled, 'Towards Darkness'.

I am not a psychoanalyst and will not look for Freudian explanations for Jha's overwhelming pessimism about the current state of world affairs, and the human prospect. Especially because he has secured approval for his pessimism through a Foreword from the highly regarded British historian, Eric Hobsbawm. But I am an incorrigible optimist and I am sure that Jha, like Malthus, will be proved wrong. The world is not headed "towards darkness".

The starting point of Jha's book is his unease with globalisation in the post-Cold War era. I share this unease, as a citizen of the developing world. He is worried about US "hegemonism" and wants a more "multipolar" global order. That too I agree with.

Long before Jha, the scriptwriter of the movie Spiderman gets the superhero's genial uncle to tell his all-powerful nephew, "With great power comes great responsibility." It was timely advice to a President of the United States on the threshold of the "unipolar interregnum" in world affairs. Jha worries that US political leadership has not internalised this advice. That "great power" is being used irresponsibly. He sees US dominance of world affairs as the culmination of a long cycle of capitalist development which, in the current phase of globalisation, has grievously damaged the Westphalian conception of the "nation-state".

Jha warns his readers that "the transition the world is going through will not necessarily end in a new equilibrium—a new island of peace or golden age. On the contrary, the disorder could easily deepen till it dismantles the entire edifice of civilised society. It is...imperative for decision-makers to recognise the threat and to take...action to evade it. The first step...is to abandon belief in the self-regulatory capacities of the market and the international political system. Concerted action requires multilateral decision-making. The present drift towards unilateralism—towards a global empire backed by military force alone—therefore poses the most serious threat that the world has ever known".

No one's written a finer analysis of global capitalism of the past two centuries than Eric Hobsbawm and Fernand Braudel, both of whom get generous mention in Jha's book. But neither Hobsbawm nor Braudel, nor indeed Karl Marx, took as dim a view of capitalism as Jha has. With all its downside and disparity, capitalism and the spread of liberal democracy have also unleashed the energies of hitherto suppressed human creativity and enterprise. They have helped new nations and peoples rise.

Jha's comprehensive view of the world today leaves out, surprisingly and very strikingly, the rise of China and its implication for globalisation and the so-called "unipolar" world. Indeed, even the rise of India and of many other developing economies gives hope. Rather than head "towards darkness", the world today offers greater possibilities and opportunities to hitherto suppressed people.No one's benefited more from the globalisation of the past quarter century than Asia to our East. We have much to learn from that experience.

I share Jha's desire for a multipolar world but that can't be willed through incantation nor the reality of global imbalances wished away by denunciation. To escape the darkness of unipolar hegemonism and build a more balanced, equal world, countries like India must invest in their own capabilities and build relationships of interdependence with other countries, big and small. They can. They are, as nation-states. The rise of Asia has already reduced the clout of trans-Atlantic powers. When the sun rises in the East, it's the West that must worry about darkness. Why does Jha take such a dreary, desolate, abject, dismal view? Cheer up, Prem!