Indian media can beam its tragedies starkly. We become racists if we do the same. 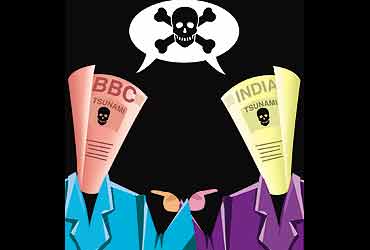 outlookindia.com
-0001-11-30T00:00:00+05:53
It was a bright, crisp winter's morning and the dew glistened on the grass, across the rough little hedges and along her pale naked legs, which hung by their entrails from the branches of a tree in a corner of the field. I had only been in India a few days and one of my first tasks was apologetically to lead my freelance cameraman away from his friends in the press pack who were consumed by this 'great shot'. Hers was one of hundreds of bodies scattered around the Haryana village of Charkhi Dadri after a mid-air collision in late 1996, and I was explaining to my bemused colleague that I didn't want him to film any of them. I knew the BBC wouldn't show them because there was no reason to. Bodies in accidents at high altitude are ripped apart by the impact, the fall twists the remains into grotesque shapes and then they are burnt beyond recognition from the fireball created by the ignition of the jet fuel. But did this article need a photograph for you to understand the event? The answer, if you're a normal human being, is no.

There are times, though, when the answer is yes. The tsunami wave on December 26 was unprecedented in modern history. It would have been impossible, because there has been nothing like it, not to show the scale of destruction and loss of life in some form if the public was to truly understand its magnitude. Bodies were everywhere. You couldn't show a scene of destruction without them. And because those images conveyed the enormity of what had happened, the public generosity across the world was often well ahead of most governments.

And yet shortly after the tsunami hit, a national newspaper (The Indian Express) carried a front-page piece accusing the international media, including BBC News, of abandoning all decency and slapping on images of dead people in a willy-nilly fashion because, it accused, they were Asians. This, it also alleged, contrasted sharply with the coverage of the 9/11 disaster. The article was, frankly, rubbish. The BBC wasn't showing graphic or gratuitous images and the piece conveniently ignored the fact that the first images of the dead were from Thailand where half the victims were Europeans. To show only Asians, journalists would need to have carried out autopsies before filing their pictures. But most of all, it was hypocritical. On the same day, in the same newspaper, was a graphic picture of a man weeping over his dead baby. There were more horrific corpses on pages 4 and 9. Why do parts of the media demand higher standards from others (and actually often get them) than they will accept for themselves?

Comparisons with 9/11 also missed the point. On that day the BBC, like every other broadcaster, showed the planes crashing into the twin towers and the death and destruction that followed. What we didn't do was keep recycling those same images days afterwards because that would have reduced them to entertainment. But unlike 9/11 where the scale of the disaster was immediately apparent, the terrible aftermath of the tsunami went on revealing itself day after day, producing new images that constantly redefined the scale of the destruction. There was no double standard at work here, just 70 times the number of dead. The casualty figures for 9/11 went down over time, the tsunami figures are rising even now.

But the Indian public should get a better opportunity to discuss what gets piped into their homes or dropped through their letter boxes. Events like the tsunami demand from broadcasters and publishers mature editorial judgements about what really needs to be shown, and what doesn't. The BBC thought hard about every image it broadcast, including those from India (I know that because I was in Nagapattinam making the decisions). We used images of bodies extremely sparingly, we concentrated on wide shots, avoided graphic close-ups and, when filming cremations, started half way though to show only the flames, not the bloated corpses piled up at the beginning.It was in contrast to parts of the Indian media whose own readers complained their pictures did not "show any respect to the dead" and treated humans as no better than "dead fish". The BBC has had hundreds of e-mails from the public praising our coverage for being sober and not mawkish.

Whilst there has been endless debate in India about sexual images on television (even a hint of thong managed to devour pages of newsprint over several weeks), there's been little discussion about the portrayal of violence. Plane crashes, train accidents, murders and fires form the staple of the domestic 24-hour news networks. These events are tragic but they are not hard to comprehend, so who needs the constant images of death? How can an Indian news channel, in a lunchtime rerun of their crime show, broadcast without warning pictures of two babies stabbed to death on their bed by their own mother at a time when many children will be watching? It doesn't add to anyone's understanding, it just adds to the ratings, as broadcasters pander to the base instinct that creates crowds around car crashes. India needs a genuinely open debate about the portrayal of death, which is best illustrated by the journalist who wrote the story attacking the international media. When asked on a BBC radio programme, broadcast only in the UK, about those pictures in his own newspaper, he said, "I was appalled when I saw those photographs personally.... I think it was an error in editorial judgement and we have tried to correct it subsequently." It's the kind of admission that should be made to Indians.