Past experiences of three community radio stations in three different states prove health communication has to be grassroots, not national, and collaborative and participatory, not top-down 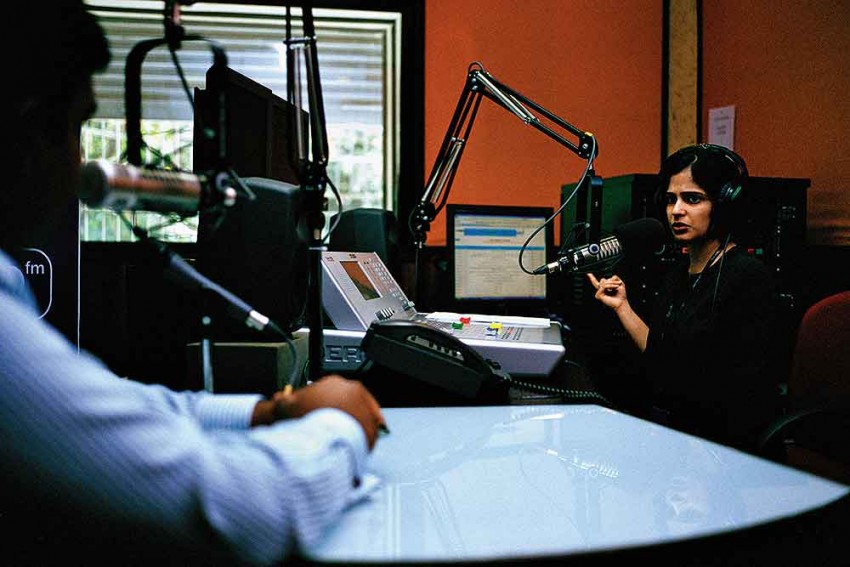 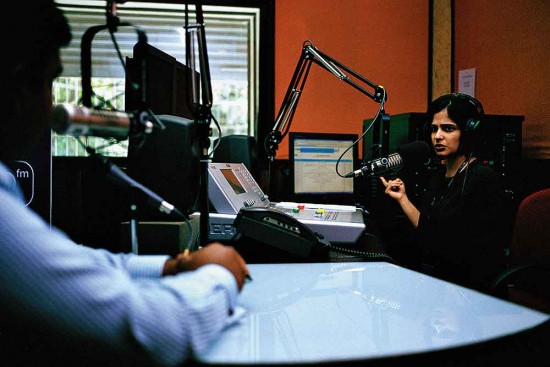 Prime Minister Narendra Modi has a dream. Using grandiose welfare schemes, and implementing them across the country is his way of effecting behavior changes at the local and communities’ levels. But there is another way of health communication. A bottom-up approach, rather than a top-down one, can work wonders in most areas. One in which, according to researcher Devi Leena Bose, the “lived experiences and shared stories of learners and other community members” can be combined “with expert information”.

Such an approach needs to have the following crucial ingredients:

In such a system, local platforms, like mobile, community radio (CR) stations, and local TV channels have to be involved. Three experiences from CR stations in Haryana, Uttar Pradesh, and Jharkhand, reveal that radio can prove to be an effective tool for effecting behavior changes in specific communities. This is critical because national schemes fail to achieve their objectives because they largely fail to grasp and incorporate local, cultural, traditional, and community-based sub-texts that can benefit them.

By the beginning of this decade, many station managers and experts felt that CR stations had several limitations in terms of audience reach, and feedback. So, JMV thought of using the mobile, which had become quite popular in both urban and rural areas, as a platform for health and development content. A pilot in four rural areas indicated the extent of mobile penetration ­­— 98% of the population had one/functional phone. Even the survey and part of the research to pinpoint local issues that were deemed to be relevant by the local communities was done through the mobile.

Here is what a booklet, Kahani Baki Hai: For stories must be told, brought out by Maraa, a media and arts collective, and Commonwealth of Learning, said about JMV’s experiences with the mobile:

“The message matrix created building blocks out of each issue, in order to broach maternal mortality related concerns such as amnesia, eating habits, the workload of women, and others that need to be tackled simultaneously. The advantage of using the mobile phone for community health initiatives is its easy availability. This coupled with the factors listed above, have dynamic potential for communication for development programming.” 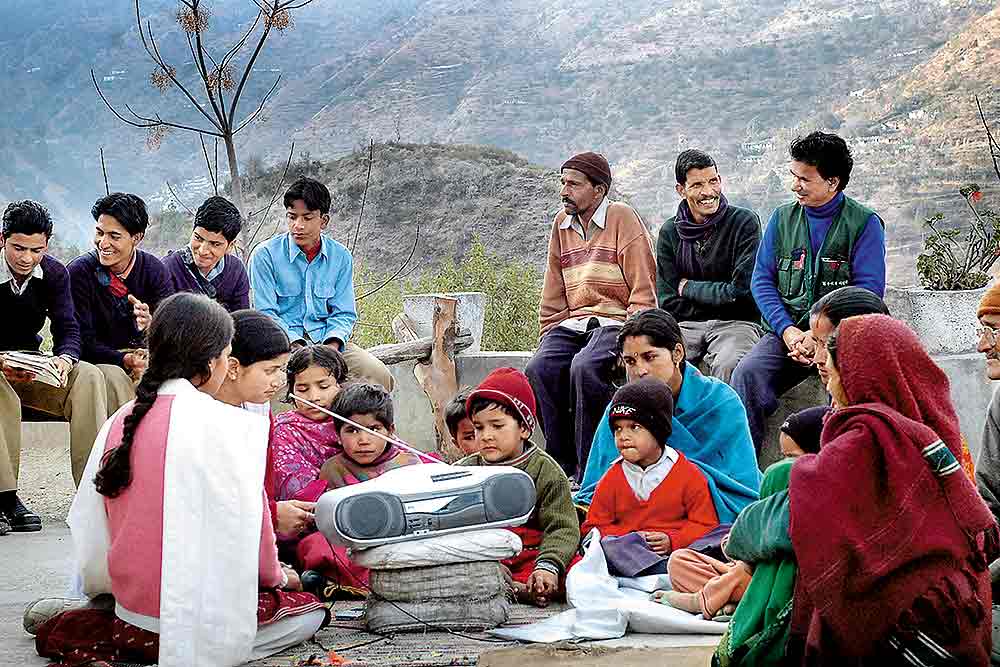 Photograph by Getty Images
Instead of CR radio, JMV felt that it was better to air health content through mobile, which was a personal medium. A mobile was also owned by most individuals in the communities

“At the end of each (radio) episode, Shabnam (a fictitious anchor) asks the listener a question relating to the issue outlined in the episode. For example, if the episode is about people not opting for institutional delivery, the question at the end of the episode might be: what do you feel about going to the hospital for deliveries; have you ever taken your wife to the hospital; press number 3 to record comments and feedback. By pressing an alternate number, the feedback and comments of other listeners can be accessed. There is immediacy to the feedback process. Unlike a community radio station, the listener doesn’t have to call a landline, and wait in turn to speak. Each listener can immediately record his reaction, and this helps the station assess immediate responses to the program.”

“Aside from easy accessibility and availability, the mobile phone is an intrinsically personal medium — usually one-on-one. This has been advantageous... where discussion centres on intimate issues like reproductive health. Women and girls can listen to the program without feeling embarrassed or awkward in front of men, or elders. Unlike a radio, where many people can listen at one time, the mobile phone affords the listener privacy.”

“One of the biggest challenges was working within a five-minute format (for each episode). Each episode now, usually tackles one theme, and imparts a single message. Prior to the release of the episode, a promo was created and circulated, by way of publicity. The promo acted as a trigger for discussion for the program. The mobile phone affords a certain flexibility of time and convenience — listeners send in their comments and feedback for a particular episode at different points during the week. In addition, the team and JMV volunteers also narrow-cast each episode. The program is played on the mobile phone and followed by a discussion and feedback session. The feedback is usually incorporated into subsequent episodes.”

At this CR station, the idea to involve the communities and other stakeholders in the design of the content and communication led to a revelation. The station workers and reporters realized that the key wasn’t to devise information to solve the problems of the residents, but to “immerse oneself” and understand the complexities and complications of daily lives, along with the nuances of the relevant issues. Hence, the research and reporting took the shape of conversations and open discussions, rather than Q&A. Baat-cheet, ot chit-chat, emerged as the crucial concept. This change showed the many dimensions to any issue. The research process, Radha ji, who works in Kanpur Dehat, is “a never-ending process of continuous learning. The process pushed us to tease apart the nuances embedded in a single issue.”

The content format was shaped by other local realities. Here is how the booklet mentioned above explains it.

“When it came to broadcasting (about the issue of use of toilets), a debate ensued over the best format that could encapsulate the various threads. A radio drama, with its dialogic format, wouldn’t serve the purpose — a conversation about toilets between a husband and wife was so unheard of, that to play it on the air would seem almost fantastical. ‘I felt a radio drama was too cluttered, with too many elements, which wouldn’t allow us to explore the issue in finer detail,’ explains Neetu (who works with the station). 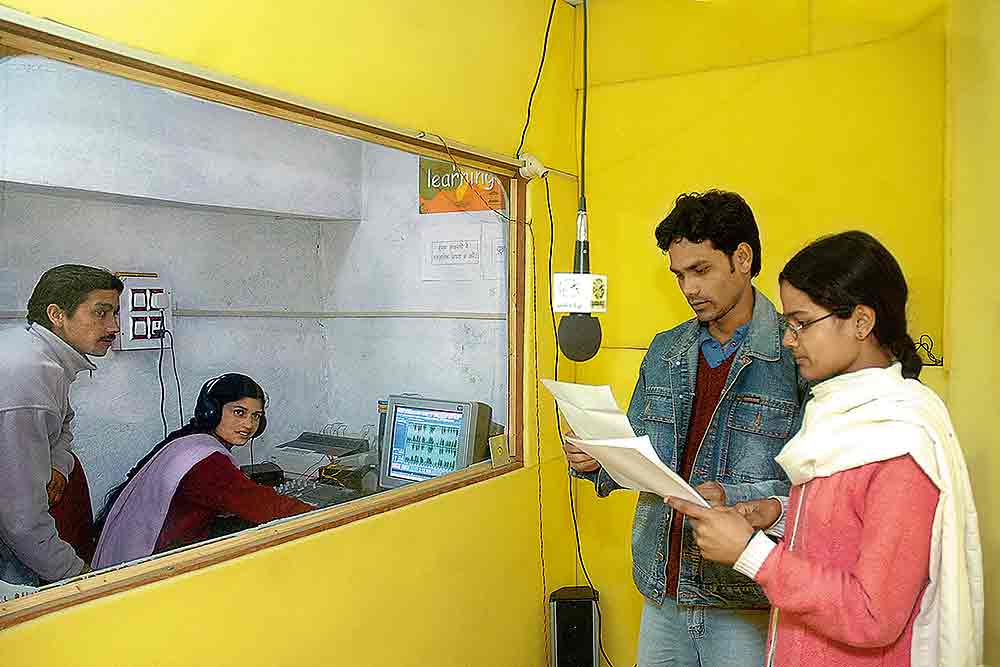 Photograph by Getty Images
The key wasn’t to devise information to solve problems, but to understand the nuances, complexities, and complications of the relevant issues. Baat-cheet became the norm

“And so emerged the diary of Kiran. Kiran, at 25, is the non-contested head of the Panchayat. The pages of her diary are littered with the thoughts and opinions that have emerged during the stakeholders’ meetings. It is a subjective account that yields a different understanding of what ostensibly seems to be only an issue of infrastructure. Questions of access and development cannot be addressed without a thorough understanding of cultural contexts, attitudes and beliefs. The arrival of a new object, something as innocuous as a toilet, can cause ripples and disturbance in the organization of social life.”

“For Neetu, embodying and personifying Kiran has led to a tremendous boost of confidence. Kiran’s reality isn’t far removed from her own, as a young female reporter working in Kanpur Dehat. There are similar concerns and apprehensions. In the initial days, Neetu remembers struggling while interviewing male community members, speaking in public about menstruation and other private matters. ‘Even when we’re on air, we know the community can recognize our voices, it took us a while to gain the confidence to speak about such issues publicly, given the context within which we work.’ Kanpur, the city, is rapidly developing and the effect is spilling over into the villages. Despite increases in literacy rates and employment, cultural attitudes are difficult to change, Radha Ji shares. ‘Working in an environment that is silent about most issues concerning health has been an ongoing challenge. What we realized is that these are private matters. It is hard to talk about these things.’”

“The program title employs the motif of the ‘Lutiya’ and complicates the journey of the ‘Lota’ (tumbler), a common household object, from the domain of the private to the public, from the home to the field. The intention of the program isn’t to immediately push for the construction of toilets — but to first encourage discussion between family members, draw attention to health-related repercussions, remove stigma around the issues of health.”

“The diary format allows for the tapestry of daily life to be woven into daily life. Who is Kiran, where does she live, what does she do every day? These are crucial elements of the episode planning process. Episodes typically begin with the description of a setting — a ‘Diya on a Chullah; the sounds of the village; daily banter within a household’ — before Kiran speaks.”

“The percentage of phone-INS... shows the popularity of the show. The process allowed for unlikely collaborations. Having worked closely with community members for over the last ten years... the station was able to bring together the community with government officials.”

Gurgaon Ki Awaaz, a CR station, caters to, among others, the residents of Mullaheda, which lies at the periphery of Sector 22, and is comprised almost wholly of migrant workers from Uttar Pradesh, Bihar, and West Bengal. Most of the men are employed in the nearby Maruti factory; the women work in garment export firms, auto ancillary units around Maruti, or as domestic workers. The challenge here was to decipher local issues in an area, where interactions were limited because of the regional, rather than community, differences, and workers kept to themselves. Chahat Chowk became the meeting place. 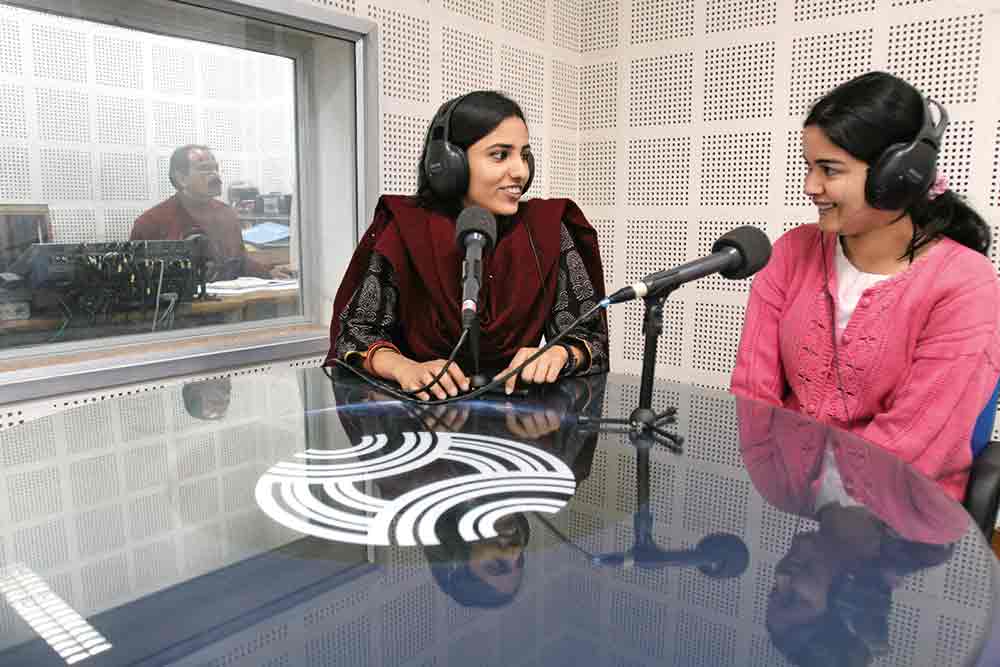 This is how the booklet describes it:

“There is, under a tree, a fictional space for men and women to converse on sexuality, love, and relationships — this is Chahat Chowk. In December 2012, Maraa conducted a baseline survey and the Community Learning Program (CLP) pilot was launched with Gurgaon Ki Awaaz (GKA). Intensive training workshops around planning, programme design, and production were conducted. For the first time, the station decided to work closely with migrants from one locality, Mullaheda, and attempted to understand their challenges. The engagement was much longer than usual where the target audience was consulted at every stage of research, design production and evaluation.”

“Initially, the research process was scattered — the primary challenge that arose was locating women, outside the home. Beauty parlors were identified as a space frequented by women, without male escorts, where women spoke freely. ‘We used to visit the parlors with our recorders, speak to the women, and go back and create a program on whatever we found most interesting. When we began programming, our interest in community members was only for the purpose of that particular episode. We never stopped to ask community members if they wanted a radio program on health, much less, the content they’d like to hear in a program.”

“Initially, the research process took the form of one-sided interviews. The focus was a given topic, and once that was discussed, reporters assumed that they had all the material required to make an episode. ‘The main intention was to find a story that corresponded to our chosen topic. We focused on recording, never giving the community members any context as to why a particular topic had been chosen. We never shared our own stories or experiences, always taking the position of a questioner.’”