Picture books, with their interplay of words and art, have a compelling inbuilt persuasiveness that draws in children, even adults, to ease up and heal with time

More from Richa Jha
View All

I was a month short of turning 13 when I saw my father flop to the floor. It wasn’t until my mother ran up to him and I heard some ­frantic mumblings before I realised my ­father was in the middle of suffering a heart attack. The aftermath of that is now a blurred cloud of fragments that can barely pass off as memory.

My father survived and recovered well. What became a casualty was my sleep; I ­remember fighting my insomnia and ­insecurities with books. My uptake from the school library more than doubled in the months that followed. But more interesting was my going back to a couple of books that I had stopped reading years ago.

These were illustrated versions of two ­popular fairy tales, both with illustrations on each page dunked in an ethereal sublimity that none of the other books had shown me before. There was something magical about them. As a young child, I remember poring over the pages for hours on end as they transported me to a land where the star-studded sky turned a delicate, ­shimmering azure at night, not black; where the snow felt more unspoilt than the first morning look at the curd my mother had set overnight. I had seen nothing like any of it before. The air of my hometown, Dhanbad, was a stubborn mix of soot and dust that stuck to us like a leech.

In the wake of all the uncertainties that ­fermented in the wake of my father’s health emergency, these are what became my go-to books for comfort. They reached out to me and gave me refuge like nothing or no one else. It wasn’t the story; it wasn’t the words, either. It was the soothing, hypnotic art, including that one particular illustration of a joyful king holding his newborn Aurora up to the skies, that latched on to my imagination in a way that made me forget my fears—and the fear of losing my father was a real one—and embraced me in its warm glow like nothing else could.

The two books have accompanied me wherever I have moved since leaving home for ­college. Three decades and eight cities later, I still turn the pages during some particularly dense moments in life. Beautiful as they still are, the illustrations no longer hold that same enchantment, but they wrap me in the ­reassuring comfort that this too shall pass.

When I, therefore, hear someone scoff at the idea that books are therapeutic, I want to take them back to my house where this young me lost herself among those pages, to hope and heal.

Years later, I was to find myself at the heart of another powerful happening that both shook me to the core and reaffirmed my ­belief in the power of a book with ­illustrations. In 2017, soon after the release of Boo! When My Sister Died, a picture book I had worked on with filmmaker, artist and writer Gautam Benegal, I took it on its first reading session to a bunch of about a ­hundred ­eight-to-16-year-olds from ­underprivileged backgrounds.

Within minutes of my beginning, I could hear sniffling and gentle sobs building inside the room from some corners. “Inke sab koi na koi abhi mar gaye hain” (all of them have been recently bereaved), a young girl ­explained, rather nonchalantly.

There was I, sitting pretty on my high perch (both literally and figuratively), ­having experienced the only death I had up close in that of a pet rabbit’s, talking about personal loss to a group of children who were still within its event horizon, for whom death had a stinging familiarity. It was ­disconcerting. Who was I to tell them how the little girl copes with her sibling’s passing away, or to show them the many shades of what grief ‘looks’ like on paper?

I apologised and stopped, immediately. And before I could decide how to take our time ­together forward, those very children began insisting I continue. With the same book.

I had carried some copies for them so that they could all see the illustrations as well. The cathartic release I saw emanating from those children, like a mist lifting, has been one of the most profound and moving ­experiences of my life. There they sat, sharing their versions of the ways in which they ­handled real pain. A dead mother, a ­murdered brother, a father who flung himself under the train, an uncle killed in custody—their stories getting muffled and garbled in the tears and sobs, but not one hesitating with the act of narration itself. And they held their copies close to them for a long time, all­owing their torment to merge with Gautam’s riveting, multi-layered visual interpretation of coping with the sudden vacuum, to eventually regain their moment of stoic acceptance.

We clicked our massive group picture at the end of the session. I later realised the children sitting closest to me were the ones who had had their meltdown just moments ago.

Art therapy, lived and practised via the many forms of creative expression, has long been acknowledged as a credible healing aid. Art in its multitude of visual and performative forms—dance, ­theatre, role play, drawing, painting—has a quiet, compelling persuasiveness inbuilt into it that draws in the children (adults, too) to ease up, with time. Unlike speaking, which in most instances insists on and gets trapped in immediate logical responses, art unfolds a more reflective territory that ­respects a child’s need for space and privacy to whatever level the situation demands. It allows children to open up with their fears in a manner that talking cannot. It gives them an intimate language to first process their own thoughts, and then to express themselves in a form that flows from there, sometimes freely, sometimes tentatively.

A picture book, with its rich, nuanced, ­skilful interplay of art and words, is known to be effective in much the same way. Long before children begin to mutter ­indistinguishable babble, their minds have already started assimilating complex ­emotions. Some of the picture books that have touched me the most as an adult are the ones that carry universal emotions of love, fear, grief, joy and empathy. These are also the very same books that I found my children responding to deeply, even as ­toddlers. At various points in time through my adult life, I have reached out to picture books that have helped me gain clarity. But I have also picked them up to help make ­introducing difficult realities to my own children easier for myself. 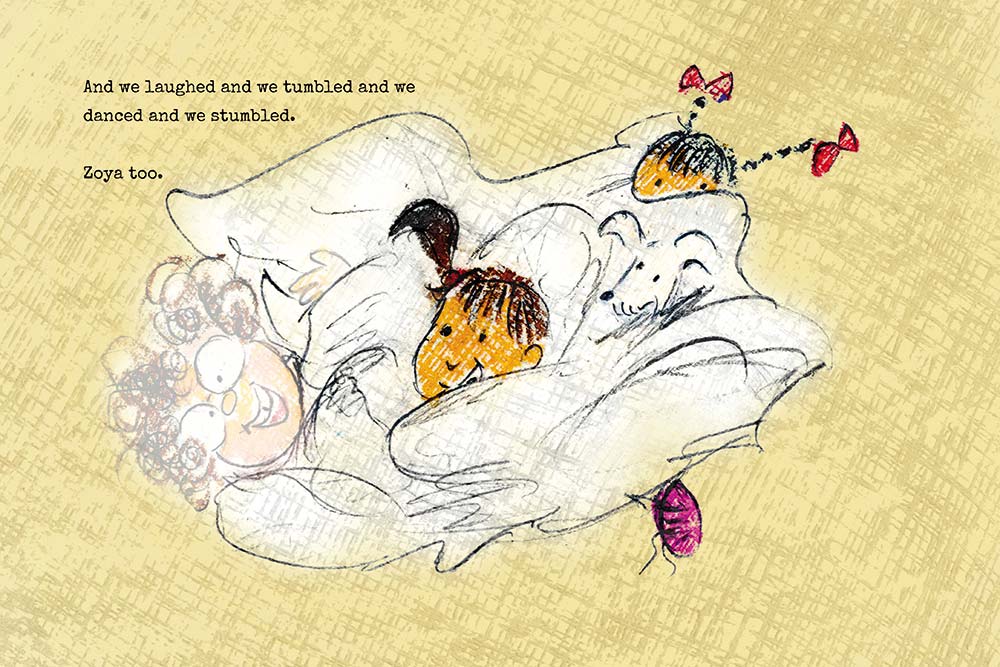 Many years ago, my (then) little daughter and I were up in bed reading Oliver Jeffers’ sparkling gem, The Heart and the Bottle, a touching story of a girl finding the courage to reclaim her aching heart, years after her father’s death. When I got to the point in the book where I always choke back a rogue tear or two, I paused, and asked her if she would continue to read picture books if I were to die. A pregnant silence later, she snuggled closer to me and said, she would. “It’ll still keep you alive for me. Like in this book.”

The pandemic has been a matrix of complex contraries. The sense of isolation has been most acute for the children, given that they are usually the most social among humans of all age groups. On the one hand, staying at home is robbing them of their critical developmental building blocks. On the other hand, the ­pervasive paranoia, at once, plunges them into the thick of the collective fear where no one around them has a clue about what comes next. Children are having to contend with the impermanence of life and livelihoods, whether within home or around them, accompanied by the stresses induced by their own home-bound existence and unending hours of screen-based education, and changed family dynamics, sometimes violence, too. Besides, even if the child has not been overtly scarred by the pandemic up close, and their world as they know it is ‘safe’, knowing about the ­tenuousness of this security is enough to ­create a vague miasma of fear.

A month before I began working on this piece, there was an ‘ask’ on a social media ­platform for book recommendations for a ­six-year-old who had just lost her mother to Covid. Heart-breaking as it was for the group members to absorb this, recommendations poured in from all sides, mostly for picture books. Not surprising, as picture books could help a child make sense of this devastating, ­upended state of being. In the company of a well-chosen title, the characters and the visual settings place the child either in the middle or on the periphery of familiar surroundings, the words bring them closer to their own fragile ­realities, and together, they often show a way out. In this combination of illustrations and words lies a promise of hope in situations that may seem daunting to the child. They help them feel less alone. But, above all, in being able to identify with characters that tend to speak directly to them, these books give ­children courage to deal with their own fears and problems. Way after the book has been put away, these helpful strains and ‘takeaways’ ­linger on the child’s mind until she picks it up again and discovers a newer way of looking at herself or the world around her. 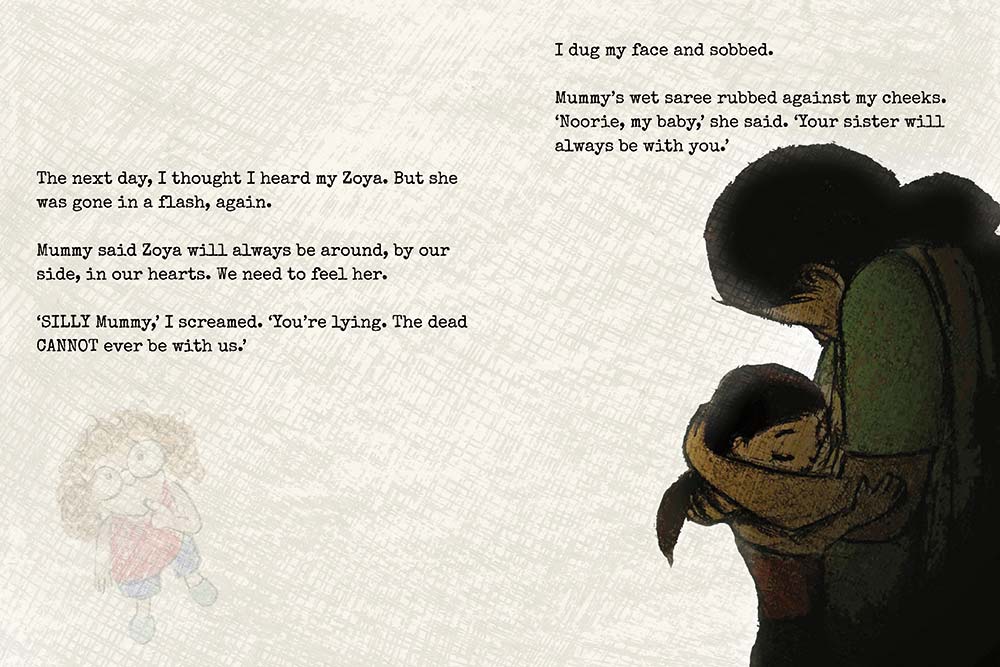 It is beyond the scope of this piece to show the many ways in which an adult could ‘use’ a picture book with a child through these trying times, but we are fortunate to have access to an inexhaustible wealth of ­explanatory resources (and carefully curated must-read theme-wise lists) on the web. It’s not difficult to identify the ones that would work best for a child’s specific needs. The new generation of urban parents are keen on ­trusting picture books as conversation ­starters with their children on topics that they would otherwise be unsure about how to. At the same time, progressive librarians, ­committed storytellers, book creators and NGOs have begun creating more virtual ­platforms for these to widen the reach.

At the height of the second wave of the ­pandemic, when friends, family members and acquaintances were getting added to the ­galloping Covid statistics, either as the ­infected or the succumbed, there were two images that got passed around from person to person over every form of social media—visual excerpts from a recent global bestseller, The Boy, the Mole, the Fox and the Horse. On one of the pages in Charlie Mackesy’s masterpiece picture book, the boy, who has just been ­rescued by his friend, the horse, from the river he fell into, holds on tight to its nape, still shaken, and the wise horse says, “Everyone is a bit scared. But we are less scared together.” In yet another poignant page, made more evocative by the exquisite depiction of a raging storm in all its indescribable splendour, the wise horse says, “This storm will pass.”

These messages of collective hope kept ­uplifting anxious hearts and seemed to unify this world in despair. There was something about these uncomplicated words coupled with breathtakingly plain artwork that drew hundreds and thousands of adults into its folds. And in that one moment, this picture book connected children and grown-ups through its deceptive simplicity. That’s what picture books do.

Richa Jha, an author, is founder and publisher of Pickle Yolk Books