Tragically, quite a molehill 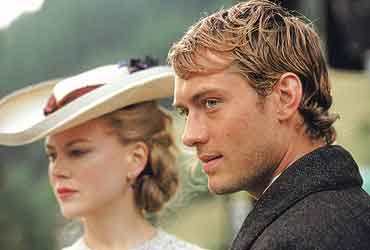 Don't get duped by the golden statues embedded in the announcements for this movie. A love story that desperately lacks lava at its centre, Cold Mountain is only an Oscar contender, with seven nominations. Disappointingly, director Anthony Minghella—who had film buffs and movie mogul Harvey Weinstein of Miramax "drenched in tears" while watching his fabulous Truly, Madly, Deeply —didn't deliver this time. And this, despite Charles Frazier's best-selling novel as source material, Sidney Pollack as producer and $80 million worth of funding from Weinstein's Miramax. Set in America during the Civil War, the film unfolds in agonisingly predictable episodes. It has the badly wounded Confederate soldier Inman (Jude Law) making a long journey home to his beloved Ada (Nicole Kidman), clutching her love-letters to his heart. Thwarting his return are plundering and pillaging Yankee soldiers, the Home Guard who've 'got orders to shoot deserters' and ruthless drunk opportunists who use wine and women to addle his senses. But unlike the adulterous preacher, war doesn't make Inman's moral rectitude go awry, not even when a lonely widow begs him to sleep beside her. He acquiesces platonically.

Blink, and you realise this is Homer's Odyssey, performed in Yankee and Southern accents with booming cannons, smoking muskets, cotton fields in the backdrop and wonderful cinematography. Sadly it's the romance that flounders. How much separation anxiety can any audience take? Keeping the beloved apart is something that Minghella's done wonderfully before in Truly and English Patient but here, watching Ada pen 103 letters to Inman gets tiresome. Specially for audiences brought up on cyber-mail.

But just when the film is about to sag under sentimentality, Renee Zellweger injects some humour when she arrives to help Ada tend the farm. Her condition, 'eating at the same table.' After all, there's a Civil War out there in the name of abolition, which you'd have forgotten if it weren't for the word 'negro' mentioned just once and the scene where black labourers run away with a basket of eggs. Watch this if you don't mind an American Civil War film, minus slaves, a censored coupling and flimsy acting by Kidman. Maudlin missives and mawkish soldiers don't make for an epic war movie. Tragically, Cold Mountain is quite a molehill.