Coins On Their Board 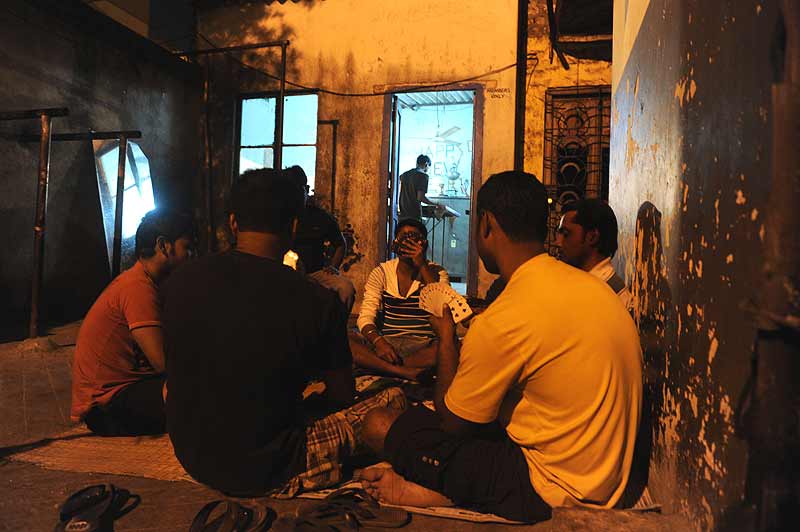 For once, the gaze shifts from the crusty, elite social clubs of Calcutta. Humble ‘para’ clubs, languishing for decades under the light of solitary, naked bulbs, have moved centrestage, thanks to the Trinamool Congress showering them with cash from state coffers—something that’s not gone unnoticed in New Delhi’s Planning Commission.

Membership to the snooty, colonial-era Calcutta Club, Bengal Club or Tollygunge Club—where condescending grandees play out the last acts of Raj etiquette—is regarded as a status symbol. In contrast, the clubs in the para (Bengali for locality) are a common breed. Known by the euphemism ‘youth organisation’, these are essentially neighbourhood hangouts where the young men of Calcutta, sma­ller towns and rural Bengal—often jobless—play cards and carrom, watch sport on TV and drink rum after nightfall. They also organise Durga, Kali and Saraswati pujas with community funds, besides the occasional sports tournam­ent or blood donation camp. A regular, if unlovely, punctuation mark  on Bengal’s landscape, they usually ope­rate out of a single room, sometimes itself forcibly occupied. Often domina­ted by a few ‘dadas’, and thoroughly politicised under Left rule, these poky premises at times double up as a kangaroo court. Politicians eager to control localities through proxies find them irresistible.

To enlist their support, the TMC last month roped in the state sports and youth services department, which han­ded out cheques to nearly such 2,400 such clubs at a mega televised function. The stated objective of the charity—which cost the cash-strapped state government Rs 40.09 cro­­re—was youth upliftment. As beneficiaries clapped, ministers declared that more clubs will soon become eligible and funds would flow seamlessly for five years, with each club receiving six lakh rupees.

Predictably, club appeasement has kicked up a political storm. Even as CPI(M) leaders accused the TMC of buying ‘muscle power’ ahead of the panchayat elections, the influential Anandabazar Patrika (ABP) revealed that plans were afoot to identify 6,700 clubs in rural belts, besides an estimated 3,500 clubs cla­mouring for dole in urban and semi-urban areas. According to the daily, the government would eventually spl­urge Rs 600 crore in five years on around 10,000 clubs, with each outfit receiving the loot of Rs 6 lakh. The Trinamool-bashing ABP believes the club cash plan is the brainchild of sports minister Madan Mitra and irrigation minister Rajiv Bandopadhyay, and enj­oys Mamata Banerjee’s blessings.

There is evidence of meticulous planning. Soon after capturing power in May 2011, the state government handed Rs 2 lakh each to 781 clubs. This set the tone for this year’s record disbursal, with beneficiaries trebling. Allocation for sports was qui­etly doubled from Rs 46.18 crore in 2011-12 to Rs 90.01 crore in 2012-13. It appears now the quantum leap was meant to foot last month’s Rs 40.09 crore club bill. In contrast, plan budgets for two departments—urban development and panchayat & rural dev­e­lopment—were slashed by Rs 297 crore and Rs 255 crore respectively in this fiscal, thus sacrificing real dev­elop­ment.

Mamata expects value for money, asking clubs to act as local vigilantes, as well as ‘fight misinformation’ by opposition.

The Planning Commission is aghast that Rs 40.09 crore under the ‘improvement of games and sports’ head of the sports department’s plan expenditure were diverted to meet expenses clearly non-plan in nature. According to fiscal rules, funds allocated under sports are meant to create durable assets like stadiums, stands, floodlights or multigyms. Instead, they were squandered on populist handouts. An economist who requested Outlook not to disclose his identity said: “A governmental promise to keep funds flowing for five years without bothering to monitor usage is inconceivable. And how can a government saddled with a Rs 2.2 lakh crore debt, forever pleading with the Centre for a moratorium on loan repayment, spend public money so recklessly?”

According to a retired chief secretary, the Left Front too wooed clubs with grants with the same motives, but it spent only a fraction of what is now being wasted. Moreover, grants were given only to registered clubs and payments were made in instalments after proper scrutiny of utilisation certificates. Now, beneficiary clubs are handpicked by MLAs, triggering charges of favouritism. Apparently, each TMC MLA was told to nominate 10 clubs. As the party’s strength in the assembly is 184, some MLAs would have shown greater zeal than others in nominating clubs for governmental largesse.

To be fair, Mamata has never had much use for ambiguity. She has exhorted clubs to become “proactive” after receiving grants. Citing Bengal’s ratio of 30,000 cops for a 10 crore population, she laid out her blueprint for proactivism thus: “There aren’t enough policemen to ensure everyone’s security. Diligent club members can police the area and ensure peace. They can bring criminals to justice. They can stand up for women...and certainly fight canards and misinformation being spread by the media and the opposition.” All that in the same breath.

Senior journalist Sunanda K. Datta-Ray told Outlook: “Para clubs are a venerable Bengali institution that served two very useful purposes. They allowed a recreational outlet for young men who were otherwise confined to the house or liable to go astray on the streets, and they nursed organisational ability. I have the happiest memories of the Ekdalia Evergreen club before it was captured by a local politician. Members organised pujas on their own steam and staged plays and socials. When municipal workers struck work in the late ’40s, they tied handkerchiefs round their mouths and noses and swept streets and drains. Recognising this service, Dr K.N. Katju, the governor, invited them to tea at Raj Bhavan. Sadly, all  that is gone. The para club is now usually a channel for collecting and disbursing political capital. Financial help for them is good in theory and I would still welcome it if constructive use of funds is supervised. I fear though that would not suit the objective of the donors.”

Only, in Bengal, ‘constructive’ use of funds has acquired new layers of meaning in recent decades.