A mysterious leak imperils the bus to Muzaffarabad Updates 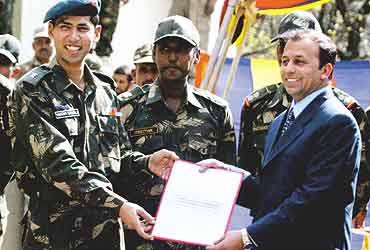 outlookindia.com
-0001-11-30T00:00:00+0553
Threats from militant groups and the curious case of the passenger list being leaked to separatists has heightened the danger to the Srinagar-Muzaffarabad bus which is to be flagged off by Prime Minister Manmohan Singh on April 7. The J&K government remains categoric—there is no question of cancelling the bus, security has been beefed up all along the route to ensure safe passage. The introduction of the bus after sixty years has the support of the people of Kashmir, voices attacking it are marginal players, say state government officials.

The bad omens came in over the fax at newspaper offices in Srinagar. Four militant groups in a two-page note warned prospective passengers to desist from travelling—calling the bus "a coffin". The note condemns the restarting of the bus service as being "against the interests of the Kashmir struggle". The statement included the names and details of the would-be passengers—or, as the note called them, "traitors". A similar list was handed over to the authorities in PoK a fortnight ago for clearance. It was supposed to be secret till the passengers were finally cleared. Incidentally, three Srinagar-based journalists figure on the list, though Pakistan authorities had said no journo would be allowed on the bus.

Consequently, the authorities in Srinagar have come in for some flak. National Conference leader Omar Abdullah pointed out that sensitive information passed on to militants means a "major intelligence failure". But no one is clear where the list, which contains the names, addresses and even phone numbers of the passengers, was sourced from. Intelligence officials claim it may have been leaked by the authorities across the border. An inquiry has already been ordered to identify the source of the leak.

The reopening of the road link had, till this point, spurred unbelievable enthusiasm. Many see the first bus as a symbolic beginning that will unite families from across the border. Points out Mehbooba Mufti of the ruling People's Democratic Party: "It's a historic moment being eagerly awaited. The bus service across the Line of Control is the biggest achievement of our party." Many want to travel. In fact, thousands waited for hours to get a form, the only travel document since passport and visa formalities had been done away with to assuage Pakistan.

There were already two notable exceptions to the positive reception the bus has got. Farooq Abdullah is opposing the bus on the ground that waiving off passport and visa formalities will result in a security risk to the country. And pro-Pakistan separatist leader Syed Ali Geelani says, "It is an attempt to put the Kashmir dispute in cold storage." While Farooq insists he will never board the bus, Geelani went to the extent of boycotting the Pakistan Day function at New Delhi! 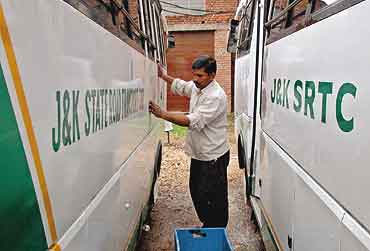 Nonetheless, the state government has decided to celebrate April 7 as a mega event. The 30 Muzaffarabad-bound passengers will be taken in two 15-seater state government-owned buses to be flagged off by Manmohan Singh at the sprawling Sher-e-Kashmir Cricket Stadium in Srinagar. Sonia Gandhi will also be present. On the same day, an equal number of passengers from Muzaffarabad will also be received here. A civic reception has been organised at Salamabad, the first township on the Indian side.

If all goes well, there will be further goodwill visits by prominent citizens and politicians from both sides. Sources say the state government will be taking leaders of mainstream

political parties of J&K on the bus. Even Hurriyat leaders like Mirwaiz Umer Farooq, who supports the reopening of the link, is slated to ride on it. Many in Srinagar are keeping their fingers crossed. The success of the bus diplomacy, militants permitting, will go a long way in building bridges.

A Hijack On The Highway