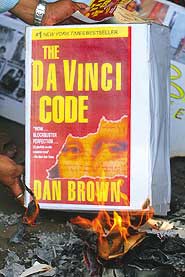 After a two-day run at the INOX multiplex here, The Da Vinci Code was suddenly withdrawn last fortnight. The Pratapsinh Rane government had written to the Centre to ban the film, but once it was released, they thought the issue had blown over. But the Goa Catholic Association and the Anti-Blasphemy Front weren’t so willing, roping in South Goa MP Churchill Alemao to lead the charge. The latter made it public that if INOX did not comply, his men would damage the multiplex. The management was given 10 minutes to axe the film. The Code disappeared.