Kerala is roiled by alcoholism, divorce, debt and suicide despite its high human development indices 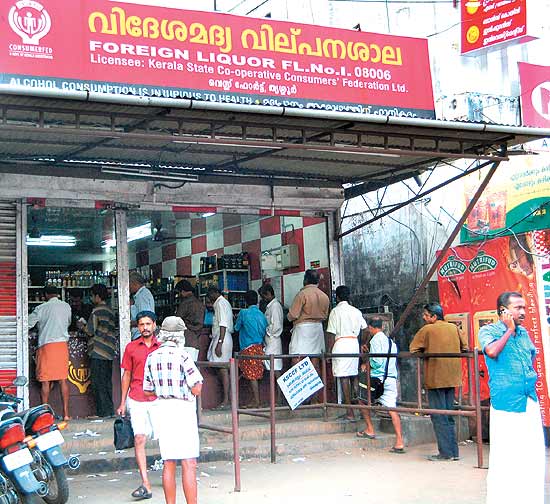 In the south quartet of states, Kerala, the smallest, demonstrates a slightly different behavioural pattern. Its human development index is impressive. The 2010 economic review puts literacy at 93.91 per cent, life expectancy at 74 years, birth rate at 14.6 per 1,000 and infant mortality at 12 per 1,000. Yet there is very little to cheer about this achievement. Alcoholism is one of its biggest social problems. Horrifyingly, there has been an 800 per cent increase in teenagers taking to alcohol in the last decade. The average age at which a Keralite begins to drink is 13.5 years.

Johnson J. Edayaranmula, executive director of the Indian Alcohol Policy Alliance, says, “Kerala has the highest number of road accidents in India; 40 per cent of them are linked to alcoholism. In government hospitals, 19 per cent of the beds are taken by alcohol or substance abuse patients. Around 18 per cent of divorces are blamed on alcoholism and 57 per cent of crime is alcohol-related. The divorce rate has risen 200 per cent in the past decade. Domestic violence has risen too.” Suicide cases abound. “We even had an eight-year-old seeking help,” says Rajesh Pillai, director of Maithri, an NGO that works for suicide prevention. “Relationships, alcoholism and consumerism are the major factors.” Though the number of suicides has reduced from a decade ago, at 25.3 suicides per lakh population in 2009-2010, it is still over twice the national average of 10.9.

One of the chief reasons for suicide is debt. Kerala spends more than it earns. It is second only to Tamil Nadu in gold buying. K. Shivaram, director of the World Gold Council, India, says, “India’s gold consumption in 2010 was 936 tonnes; 45 per cent of it was bought in the southern states.” Kerala abounds in gold shops, but gold loan agencies are equally numerous. It is a vicious circle—buying gold and mortgaging it for hard-time loans.

The high spending is probably driven by NRI remittance, which in 2009-10 was to the tune of `50,000 crore. According to Prof S. Irudaya Rajan of the Centre for Development Studies, Thiruvananthapuram, at least two million Keralites live abroad, and a million in other Indian states. One million “Gulf wives” live grey, desolate lives in Kerala while their husbands toil in Dubai, Sharjah, Muscat, Doha.