Coaldust On Them Whites 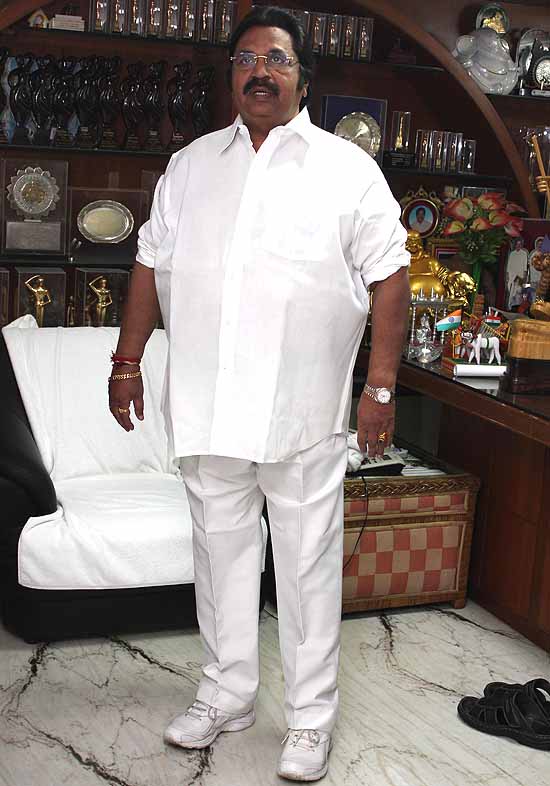 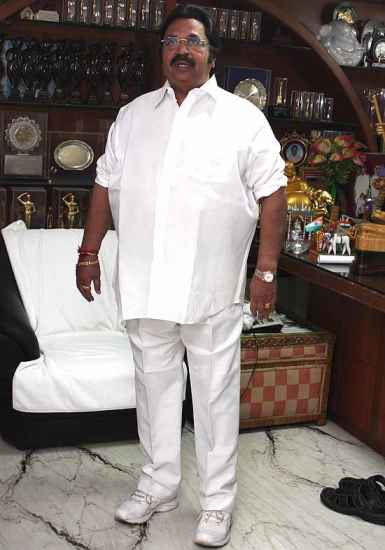 The best place to spot Dasari Narayana Rao is at one of the innumerable film functions in Hyderabad. He is the man who wields the mike for the longest time, often talking about his contribution to Telugu cinema and asking filmmakers to follow basic ethics. The 66-year-old Dasari has don­ned several hats in filmmaking, including that of director, actor, producer, dialogue writer, lyricist and talent-spotter. These days, he’s more in the news for his role in the allocation of coal mines—a saga better known as Coalgate—rather than as Tollywood’s dream merchant.

In June 2013, Dasari was named in the CBI’s chargesheet for having recei­ved Rs 2.25 crore as kickbacks from Naveen Jindal in return for allocating him the Amarkonda Murgadangal coal block in Jharkhand in 2008 during his second stint (2006-08) as minister of state for coal. (The first was in 2004-06.) More lately, Rao has resurfaced in the fracas over the role of former coal secretary P.C. Parakh. In a signed column in The Business Standard, TV journalist Sree­nivasan Jain ref­ers to an unsigned note found among papers the CBI seized from Parakh’s Hyderabad home which unflatteringly describe Rao “as a man without scruples, his hunger for money unlimited” (see graphic).

Not surprisingly, the man at the centre of this storm is lying low. When Outlook tried to contact Dasari, his PR manager Prabhu refused saying he would not comment on the coal scam. “Dasari is used to living life king-size. When his name surfaced in the coal scam, he was deeply hurt,” says a producer who declined to be identified. “Nowadays, he rarely steps out of home except for film functions.”

But Telugu filmdom is now full of tales about how Dasari, who had fallen on hard times financially, suddenly seemed flush with money after he became MoS for coal and mines in 2004. “Dasari used to stay in Prashasan Nagar in a police officer’s house on rent,” says another filmmaker, refusing to be named. “He could not pay his dues for 10 months. This was in 2002. He was in such debt that every hour he’d receive calls from financiers and lenders asking for amounts ranging from a lakh to a crore.”

“We had differences which were official (in the public domain), but otherwise he was very courteous and cordial.”
P.C. Parakh, Former coal secretary

“Dasari owned a school in Chennai opposite Prasad Studios and was to sell it to Vazhapadi Ramamurthy, a politician, in 2001 in order to recover some money. But after Dasari took an advance, Vazhapadi passed away and the sale was called off,” he says. About a month after he became Union minister in 2004, Dasari called financiers to his place and settled dues worth Rs 3.75 crore. “They were all stunned because he was literally subsisting on hand loans at the time. But they were glad to get their money back,” says a film distributor.

Overnight, Dasari seemed to have come into big money and bought distribution rights for big films such as Jai Chiranjeeva (starring Chiranjeevi), Sainikudu (Mahesh Babu), Super (Nagarjuna), Balu ABCDEFG (Pawan Kalyan), Desam Muduru (Allu Arjun). “He spent Rs 6 crore to buy the distribution rights of Jai Chiranjeeva for Nizam and Vizag areas and the movie tanked. But his company was strangely making profits,” says a director. “This way, Dasari bought rights for 40 big films soon after becoming minister. Where were the funds coming from unless it suddenly rained money in his native hometown Palakolu (West Godavari) district,” says the director.

A close associate of his would allegedly boast to colleagues about how Dasari made huge money from the coal ministry. Grade ‘C’ coal would be downgraded to Grade ‘F’ coal so that companies could pay less for acquiring coal blocks. The grateful industrialists, the associate added, would pay kickbacks in various forms. In fact, in 2006, when Dasari declared his assets as a member of the Rajya Sabha, there was no mention of companies Siri Media and Sowbhagya Media (the conduits for Jindal’s kickbacks in the CBI chargesheet). Interestingly, in the same declaration he lists the value of an air cooler (Rs 2,736), a typewriter (Rs 1,938), a tape recorder (Rs 949), a computer (Rs 4,015), an air-conditioner (Rs 2,313) under the sub-column values of claims/interests. 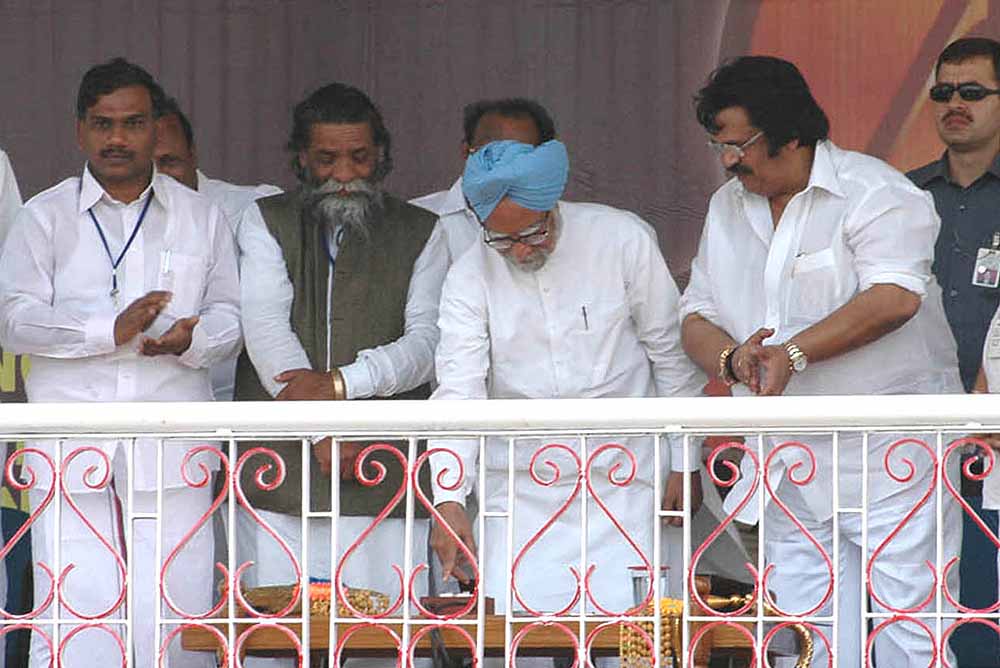 All clean Dasari Narayana Rao (right) in 2006 with Manmohan Singh, Shibu Soren and A. Raja during the unveiling of the foundation stone for a Neyveli mine project

“Even before the CBI named him in the chargesheet, Dasari, after losing the coal portfolio in 2008, made a speech during a film function at Ravindra Bharati, talking about his disenchantment with politics. While it seemed like a case of sour grapes, close associates felt there was more to the speech than just that,” says Telkapalli Ravi, editor of Prajasakti. It was this Telugu daily among others which began calling him Boggula Puli (coal tiger) in reference to his 1982 blockbuster film Bobbili Puli (starring Venkatesh). The movie was the story of an honest man who takes on corrupt politicians with panache.

A shaken Dasari hit out saying he had done nothing wrong and was still Bobbili Puli. He then said his role as a minister of state was limited and that he was simply following directions from the PMO. “Whenever there is any distribution of assets, various kinds of people, from friends, colleagues, acqua­intances and others will put pressure. It does not mean a person has to succumb to it,” is what former coal secretary Parakh told Outlook. On Dasari, Parakh goes on to say, “We had differences which were official (it is all in the public domain) but otherwise he was a very courteous and cordial person.”

Telugu filmdom is rife with stories of how a financially stricken Dasari became flush with money on becoming MoS.

A Kapu by caste, Dasari even tried to set up his own party, Telugu Talli, but was dissuaded by the Congress. He campaigned for the Congress in 1989 and expected a Rajya Sabha seat in return. It was only in 2004 that his dream came true after Shibu Soren’s unceremonious exit and he became minister of state for two terms. Never on good terms with Chi­ranjeevi, Dasari felt sidelined after the latter’s entry into Congress. Since Chiranjeevi too is a Kapu, Dasari felt the actor was encroaching on his territory. Rumours have been doing the rounds that the YSR Congress has been wooing him but so far Dasari has maintained a safe distance from Jaganmohan Reddy.

Producer Daggubati Suresh of Suresh Productions terms Dasari as the man who brought a lot of value to the mantle of director. “His first 70-80 films took him to the zenith; just the name Dasari was enough to ensure a film’s success. His movies often spoke of social injustice and had powerful dialogues written by Dasari himself. The respect the industry has for him is the reason why Dasari Narayana Rao is called first on stage to speak at film functions,” he says.

But then, there are tales about his megalomania. “His egoistic nature, his vindictiveness led many in the industry to fear him. He wants everyone to fall at his feet and praise him endlessly. Otherwise, Dasari considers it a slight and hounds the particular actor or filmmaker out of the industry. He literally thrust peddarikam (greatness) upon himself,” says a young Tollywood actor.

The fact that new-generation actors refused to pay him obeisance evidently irked Dasari. In 2011, he remarked at a function that the younger lot did not know the basics of acting and danced like club dancers. Reacting to this, Chiranjeevi’s son, Ram Charan Tej, hit out. He posted a tweet saying: “So-called great directors are confined only to speeches and lectures on stage nowadays. They can’t move anything but their mouth.” While Ram Charan did not name Dasari, the timing left little to the imagination.

“Despite all the flak he faces now, Dasari was the one who revolutionised Telugu filmmaking,” says Parakala Prabhakar, political economist. “He defied norms and made successful low-budget films with lesser-known actors. The storyline was not elitist but one which glorified the common man. It was imitative of Bengali literature. Dasari brought the native Telugu idiom to the centrestage,” says Prabhakar.

As a scriptwriter, he popularised a theatrical ping-pong form of dialogue which was sharp and quick-witted. The takeaway from Dasari films is, of course, the last part. As credits roll and audiences get up to leave, his voice echoes in the theatre, saying Aagandi vellipokandi (Don’t leave just yet). Following which, Dasari proceeds to spell out the moral of the story for the audiences to learn and imbibe.

Ironically, when Dasari was named in the CBI FIR, he was planning to start a movie named Assembly lo Dongalu Paddaru (Thieves in the Assembly). This movie was to focus on corrupt practices of politicians.