A theocratic spectre haunts Pakistan, but jehadis disunited by hate undercut the threat 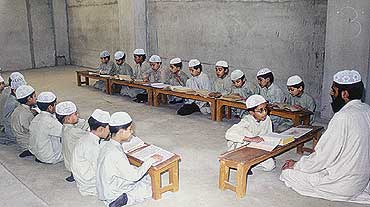 outlookindia.com
-0001-11-30T00:00:00+0553
On July 1, 1980, Pakistan's Shia clergy converged on the administrative city of Islamabad to protest against the pro-Sunni policies of the military ruler of Pakistan, Gen Zia-ul-Haq. For nearly three consecutive days, the Shia clergy occupied the building blocks housing the secretariat of the federal government as well as the streets in Islamabad. The paralysed military regime retreated to the adjoining garrison city of Rawalpindi. That was a rare occasion when the generals felt scared in a country where military rule has been the norm. The Shias left only after Zia accepted most of their demands.

The Shia protest shook Gen Zia, who began nurturing his own constituency among the Sunni clergy. Consequently, Sunni Islamist organisations and madrassas mushroomed countrywide. Simultaneously, the cia-sponsored jehad in Afghanistan also needed human cannon fodder from such organisations and madrassas. The interests of Gen Zia and the cia coincided and many of these organisations received lavish financial support from both sources. With the exception of a few Islamist parties—the Jamat-e-Islami, the Jamiat Ulema-e-Islam (jui) and the Jamiat Ulema-e-Pakistan (jup)—most Pakistani Islamist and jehadi organisations trace their origins to the Zia era and flourished with assistance from around three dozen countries, particularly the US and Saudi Arabia.

Gen Zia died in 1988, leaving behind as his most enduring legacy the jehadi groups and madrassas, which were fast multiplying. As the Afghan jehad came to an end with the Soviet withdrawal from Afghanistan, the Pakistani establishment diverted these jehadis towards Kashmir where a great rebellion was unfolding.

With rising unemployment and increasing pauperisation of the society, Pakistan has become a fertile land for the recruitment of Islamists and jehadis. Most of the outfits concentrate on the poorest regions to recruit their cadre. This is particularly true of the organisations which recruit their cadre from madrassas. Such groups include the three factions of Jamiat Ulema-e-Islam, the Sipah-e-Sahaba Pakistan (ssp), the Harkat-ul-Mujahideen, the Harkat Al-Jihad Al-Islami, Jaish-e-Mohammad and the Jamat Ahle Sunnat. The Lashkar-e-Toiba is one big exception, with less than 3 per cent of its cadre from madrassas. Their popularity stems from the fact that they provide food, clothing, and shelter as well as reason to live and die to those for whom the society has nothing to offer. In other words, they impart meaning to their lives. The world no longer looks invincible to them when they pick up Kalashnikovs to avenge their past miseries.

Some Islamist organisations focus particularly on the lower-middle classes. The Jamat-e-Islami, its offshoots, and the Tehreek Minhaj-ul-Quran are packed with recruits from this class. The Tanzeem-ul-Ikhwan, another organisation with its roots in the middle classes, is staffed with retired army officers. However, all of them focus on the rich, mercantile upper classes for funds.

The popularity of Islamism among the middle and upper classes is due to the perceived worldwide humiliation of Muslims. For them, jehad is the only way Muslims can retrieve their lost glory. Hesitant to pick the Kalashnikov themselves, they donate lavishly to those willing to do the same.

Islamist and jehadi organisations are increasingly turning their attention towards Pakistani society. Ideally, they would like to establish an Islamist state in Pakistan from where they can export the jehad abroad.

Their rise has visibly dented the votebank of the major parties, such as Benazir Bhutto's Pakistan People's Party (ppp) and Nawaz Sharif's Pakistan Muslim League (pml). Disenchanted with the palpable failure of the state to deliver, many sections look upon Islamist and jehadi parties to provide solutions to their problems. And they've already taken over many functions of the state, particularly education and healthcare. Perhaps the gradual decrease in the voters' turnout in general elections, 1990 onwards, is due to the success of these organisations.

My own calculations show that hardcore Islamists number 5 million, as against Musharraf's estimate of 1.5 million. Out of these, nearly 5,00,000 have received military training, though very few eventually go to wage jehad in Kashmir or Afghanistan. They're waiting for the right time to establish an Islamist state in Pakistan.

The opposition to religious politics could never strike roots, largely because all governments, since 1977, have tried to coopt Islamist parties. Nawaz Sharif allied with the Jamat-e-Islami and the Jamiat Ahle Hadith; Benazir Bhutto headed coalition governments with jui of Fazlur Rehman and the ssp. Similarly, all political parties have supported the Taliban and jehad in Kashmir, consequently bolstering religious outfits.

Unlike the mainstream political parties, Islamist and jehadi organisations keep a low profile, preferring to hold small gatherings in mosques and streets instead of organising public rallies. But this doesn't mean they lack mass support. The jui gathered over half-a-million persons last April for a conference of Deobandis; the Lashkar-e-Toiba would, till 1999, attract around 4,00,000 persons at its annual convention at Muridke (it had to abandon this practice under different pressures); the biennial international conventions of the Jamat-e-Islami boasts of 2,00,000-odd participants. Neither Benazir nor Sharif can command such a large turnout.

Yet, an Islamist takeover remains a far-fetched dream. Most of these organisations consider other groups infidels and fight each other with the same ferocity as they do the Indian army. Since the early eighties, thousands of them have died in the Deobandi-Shia conflicts in Pakistan; again, several thousands perished in the internecine war of the Kashmiri jehadi groups. Indeed, when some Islamist groups feel emboldened to make a bid for Islamabad, rest assure that other Islamist forces would foil them.

(Arif Jamal is writing a book on jehad in Kashmir.)