Four months without fresh vegetables. Instead, Ladakh-Kargil was served some plum political messaging by the BJP. Its road to glory, however, was blocked by snow. 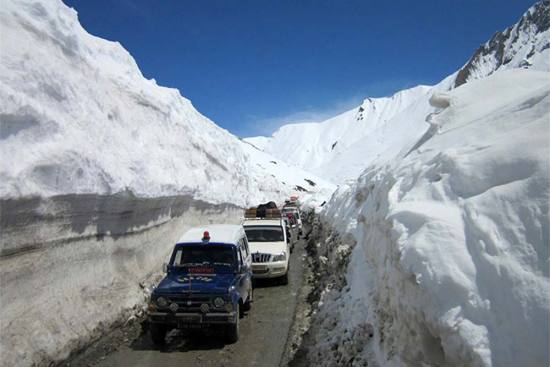 Last week, the Khree Sultan Chow Stadium in Kargil saw long queues of people waiting to buy vegetables procured by the administration. And many had to return empty-handed. People of the region have been complaining that they haven’t seen fresh vegetables in the past four months. Leh and Kargil districts are facing this shortage due to blocked roads, even though the government claimed that the Zojila pass, situated at an altitude of 11,578 ft, was cleared of snow and the 434-km-long Srinagar-Leh highway thrown open to traffic on February 28, much ahead of schedule, for the first time in 70 years. Since last December, when the road was closed following heavy snowfall, the government had been claiming it would be reopened much earlier than usual. That the road would remain closed for only two months, not six (December to May) as was the case before the reorganisation of Jammu and Kashmir, became almost the centerpiece of the BJP’s political messaging. Moreover, the government and the Border Roads Organisation (BRO) described the reopening as a strategic requirement due to the India-China stand-off and said it would help people of Ladakh and the troops in the region.

However, just a day after the reopening, heavy snowfall blocked Zojila pass and the Srinagar-Leh highway was closed again. Trucks laden with essential goods being transported to Ladakh remained stranded for more than 40 days. Ladakh divisional commissioner Saugat Biswas says the road had to be closed due to inclement weather and heavy snowfall, adding that it was opened off and on in April. “It is unprecedented that the road was opened in three-and-half months,” Biswas claims.