With claims and counter-claims flying high, the real story behind the scam may never come out 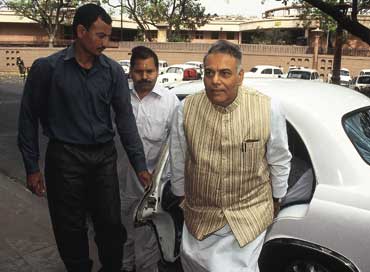 outlookindia.com
-0001-11-30T00:00:00+0553
On August 3 afternoon, ex-uti chairman P.S. Subramanyam and three others were remanded to judicial custody in Mumbai for four more days after the Central Bureau of Investigation (cbi) informed the court that Subramanyam had admitted to calling up top government functionaries from his cellphone, and the cbi wanted to probe this angle further.

But, as Parliament turned into a chaotic battlefield yet again over the scandal, the question uppermost on everybody's mind is: in spite of all the debates and accusations and counter-accusations, will the real story ever be made public, or even probed properly?

Even though Lok Sabha Speaker G.M.C. Balayogi announced on Friday that the jpc investigating the stockmarket scam will also look into all other uti-related allegations made by the Opposition, doubts remain. In fact, even the Opposition may not be too eager to go beyond the usual shouting matches inside the House. And intelligence officers feel that the tarnished uti boss is a man who knows too much, which may trigger off a massive cover-up operation to protect larger interests and bigger players.

Says Congress MP Kapil Sibal: "The finance minister has said he's clueless about the investigation. That means only two things—either he's telling the truth and that's hardly a positive thing, or he is desperate for a cover-up." Sinha has put the blame squarely on Subramanyam and even dragged Manmohan Singh into the mess, by zooming in on a controversial Rs 1,073-crore uti investment in Reliance Industries in 1994. But while Sinha has steadfastly maintained that he was kept in the dark by uti, sources close to Subramanyam told Outlook that the latter had written to the FM twice, on May 18 and June 30, warning that the US-64 portfolio was bleeding and redemptions may have to be frozen. "Mr Sinha had dwelt on these letters for at least an hour and then asked Subramanyam to seek the board of trustees' approval for suspending redemptions," the sources revealed. They were eventually suspended on July 2.

Shiv Sena MP Sanjay Nirupam, who created a stir with his accusations about links between the uti scandal and top government officials, told Outlook: "What I have said is just a fraction of the explosive information that I actually have. But I cannot reveal further as my statements have hurt senior leaders."

Contrast this muddle with what the investigating agencies have unearthed, and the findings look startling:

All For The Other Parivar