What went so horribly wrong, the party can't stop asking itself 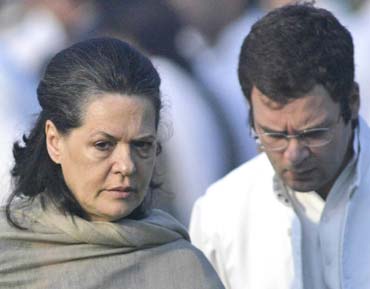 outlookindia.com
-0001-11-30T00:00:00+0553
For the Congress, Narendra Modi's resounding victory in Gujarat, just three short of a two-thirds majority and his second successive win, is more than a routine electoral defeat. It also signals the waning influence of the once Grand Old Party now beset by poor organisation, factionalism, an overdependence on dissidence in other parties and lack of ideological coherence. Worse, Congressmen are finally having to face the fact that the Dynasty does not have a magic wand.

This sense of despair was reflected in the funereal atmosphere at Congress president Sonia Gandhi's 10, Janpath, residence on the evening of December 24 as the party's top brass went into a huddle to discuss the debacle in Gujarat. As some of those in charge of the state offered their resignations, Sonia hushed them up saying no one person should take the rap for the party's defeat as it was a case of "collective responsibility". Union external affairs minister Pranab Mukherjee stressed the need to "reformulate" party strategy to tackle communalism, an oblique reference to the party's inability to resolve whether to play the soft Hindutva card or frontally take on Modi's muscular Hindutva message. General secretary Digvijay Singh added that the Congress needed to abandon the "cocktail" approach—the party should not admit into its fold those from other ideologies, as it did with the BJP dissidents in Gujarat.

But is this post-mortem (a second meeting is scheduled in January when a detailed and comprehensive report, analysing the reasons for the party's abysmally poor showing from booth level upwards, will be discussed) likely to be any different from those that have preceded it in recent years?

For, clearly, the first effort was to protect the dynasty from any criticism. So, party media chairperson Veerappa Moily, while dodging questions on the efficacy of using Rahul Gandhi, strongly defended Sonia's use of the controversial "merchants of death" phrase. Curiously, instead of thinking up an original explanation, he resorted to quoting journalist Harish Khare—that the remark was "intended to offer the Gujarat electorate a clear-cut choice between an uncompromising secular vision and an equally unsentimental divisive Hindu votebank strategy". Privately, senior leaders said that Sonia had warned them in writing against taking into the party those from an RSS background, adding that she eventually allowed herself to be overruled by local Gujarat leaders. The latter had reportedly promoted the idea of working closely with the BJP dissidents and giving them tickets. In the end, 15 ex-BJP men—eight sitting MLAs and seven recommended by the dissidents—were given tickets. Of them, just one won.

If the growing consensus in the party is that tying up with the BJP rebels proved counterproductive in Saurashtra, some of which spilled into Surat in South Gujarat, there is wide admission that the poor showing in North Gujarat was a result of factionalism within the party. As many as 11 Congress rebels stood against official candidates. Worse, the Congress lost another 11 seats, as the Bahujan Samaj Party, which contested 166 seats, cut into its voteshare; another two were lost because of "friendly fights" with UPA alliance partners RJD and LJP.

As a pall of gloom shrouds the Congress, two persons are being specially singled out for the defeat, one in hushed whispers and the other openly: Sonia's political secretary, Ahmed Patel, and Union textile minister Shankersinh Vaghela, the latter, originally a BJP man. Patel, it is felt, used his proximity to Sonia to control Gujarat. As chief architect of party strategy, he has over the years prevented any other Gujarati leader from emerging, lest he be overshadowed in his home state. But party sources add he also failed to use his authority to check infighting in the state unit. Vaghela, on his part, has never enjoyed the full trust of his party colleagues because of his political origins: indeed, though he was not the only state leader to promote the idea of working closely with the BJP dissidents, the blame is being laid at his door. 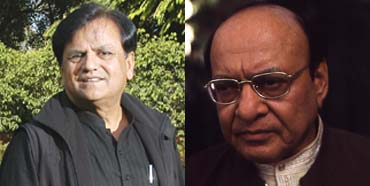 The Congress has also belatedly realised that cohabitation with the BJP dissidents—some of whom like former home minister Gordhan Zadafia were involved in the 2002 riots—did little to enhance the party's image among its core supporters. Second, in Saurashtra, on which the Congress had pinned most of its hopes, Keshubhai Patel's refusal to quit the BJP confused the Leuva Patels. It simultaneously created the impression that the Patels had become anti-BJP. This, a senior Congress functionary said, ensured that while the party did not benefit much from the Patels, its traditional voters among the OBCs—known in Gujarat as the Bakshipanch—deserted the party. Far from adding 20-odd seats to its '02 score, it lost three seats in this region.

And if the BJP in Gujarat was able to project both a leader and an ideology—Narendra Modi and Hindutva—the Congress failed on both counts. While no one was promoted as the party's choice for CM, signals were confused as far as ideology was concerned. A senior party leader told Outlook, "State leaders were insistent that neither Tehelka, nor the Sachar report nor reservation should figure in the speeches; it was only Sonia who attacked Modi frontally on the communal issue. This disconnect between state and central leaders, too, had its fallout."

In Gujarat, where the Congress was better-placed than it had been in many years, the mother-son duo drew big crowds but there was no organisation or strategy that could convert that into votes. Is this going to be the pattern in future elections as the Congress starts to vanish from different parts of the country? For Gujarat, it would appear, has now joined the list of states where the Congress has not been in power for over 15 years. If the party last won an election in the state 22 years ago in 1985, it has been out of power in West Bengal, Uttar Pradesh and Bihar for the last 32, 18 and 17 years respectively. And in Tamil Nadu, it had its own government 40 years ago.

Does the party have the capacity to reinvent itself as the Congress's Group on Future Challenges has tasked itself to do? Group head Moily is now talking of recreating the Congress the way the Labour Party in Britain created New Labour in the early '90s. But it is hard to tell whether Gujarat will serve as a real wake-up call for a party characterised by intrigue, factionalism and nepotism.

Instead of winning Gujarat, and then taking on a vulnerable Left on the controversial nuclear deal, perhaps even calling for an early general election, the Congress stands exposed, at loggerheads with its chief supporter, the CPI(M), its own organisation in a shambles and the Nehru-Gandhis increasingly looking like mortals, with feet of clay.

The danger is: India Shining may be dead, but could Vibrant Gujarat grow into India Rising?