Nepal is a complex tangle with the King, India and Maoists making deft moves Updates 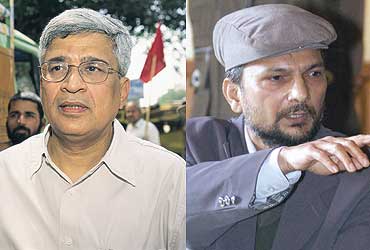 outlookindia.com
-0001-11-30T00:00:00+0553
For long perceived as the region's big bully with nefarious intentions, last week's twin developments bolstered the image most Nepalis have of India: it publicly supports democratic forces but winks at regimes attempting to stamp them out. At the heart of the controversy was the audio-visual tape the Royal Nepal Army (RNA) released establishing links between the Indian government and the Maoists. And then, came the news about the meeting between CPI(M) boss Prakash Karat and Maoist leader Baburam Bhattarai in New Delhi.

Though Karat later denied having met Bhattarai, sources say the meeting did take place, albeit without the assistance of intelligence agencies. These sources told Outlook that Bhattarai was to meet CPI leader A.B. Bardhan in the week following May 12. "But the meeting," they claim, "didn't take place due to technical reasons." These claims and denials apart, just about everyone believes that, in a display of running with the hare and hunting with the hound, New Delhi was hosting Bhattarai even though his party—the Communist Party of Nepal (Maoist), or CPN(M)—is described as a terrorist outfit.

The reported meeting between Karat and Bhattarai couldn't have been more inopportune. On Thursday, May 19, the RNA released an audio-visual tape in which Maoist supremo Prachanda was shown telling his cadres that Bhattarai had been divested of all responsibilities since he's India's man, that the Indian government had withheld release of two incarcerated Maoist leaders, C.P. Gajurel and Mohan Baidya alias Kiran, as "earlier assured" because New Delhi's 'man' Bhattarai had been sidelined in the party. The tape even claimed that the Indian government had invited Maoists for a parley, but this dialogue didn't take place because Prachanda insisted upon New Delhi sending its man to "our area and we'll take the responsibility for his safety and security."

Even before Karat's reported meeting with Bhattarai hit the headlines, Nepal's foreign ministry admonished Indian ambassador Shiv Shankar Mukherjee for interfering in the internal affairs of the country. Mukherjee's guilt: he had supported the decision of seven political parties to agitate against the royal coup of February 1. The admonition was proof of both Nepal's foreign ministry and the army working in tandem to expose Big Brother India's gameplan in Nepal.

Taken aback, the Indian embassy in Kathmandu questioned the tape's authenticity. Kathmandu quickly undertook a damage-control exercise: RNA boss Gen Pyar Jung Thapa met ambassador Mukherjee to explain that Nepal banked more on India than anybody else in the fight against terrorism; that the army press briefing wasn't directed against India. However, the attempt to check acrimony seeping into Indo-Nepal relations was scuppered with the news about Karat's meeting with Bhattarai, incidentally reported first in the Dubai-based Gulf News. 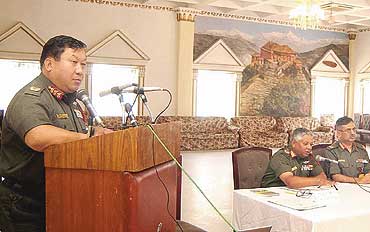 In neither the choppy waters of international diplomacy nor in the inscrutable world of guerrillas and intelligence agencies, the apparent is ever the full truth. Last week's sensational developments have prompted a few questions: Why did the RNA release the tape? Have Prachanda and Bhattarai come together, scotching earlier news of the split in the CPN(M)? What's the king and India's game? Readers had better be warned: what follows are theories constructed through conversations with all the important players.

So why did the RNA release the tape at the time India had agreed to resume arms supply to Nepal? A former Nepali general says hardliners in the Nepal government don't want to take steps to restore democracy, a condition the king had accepted in return for India resuming arms supply. Making public a tape the RNA had long been in possession, says the general, was to discredit India in the international arena for its duplicitous role in the fight against terrorism. Wouldn't an embarrassed India be less assertive in Nepal?

That's just one side of the story: what did India gain through leaks about Bhattarai's presence in New Delhi? Indian intelligence sources say ever since Gyanendra usurped power, New Delhi has been mulling over playing the Maoist card; that the threat of rallying the Maoists against the king is an effective instrument to goad him into restoring democracy. They compare the situation in Nepal to Sri Lanka, where India trained the ltte and yet played peace-broker.

Linked to this is the schism among the Maoists. Bhattarai reportedly favours working with political parties on a common agenda, instead of talking to the king. By contrast, Prachanda says the Maoists represent the new order and, therefore, the CPN(M) should talk to the supreme representative of the old order, King Gyanendra. By branding Bhattarai as India's man, Prachanda was undermining Bhattarai's political career and consequently paving the way for taking Nepal's politics in the direction he wants.

But didn't Prachanda issue a statement saying the tape is of a context that's irrelevant now? That is, he no longer thinks Bhattarai is India's man. Ironically, his statement only confirmed the tape's authenticity, that he had indeed made such a statement at the time his relationship with Bhattarai had been strained. Prachanda had also unwittingly accepted that the Maoists, at least in the past, were in touch with India.

Maoist insiders claim that a central committee member of the party close to Prachanda is in touch with a Nepali minister. They say both Prachanda and the king see Bhattarai as an impediment to talks; consequently the RNA released the tape to weaken Bhattarai, exploiting the suspicion Maoist cadres have about those close to India. A dialogue between the king and the Maoists will mollify the international community which favours peace and democracy. And, should the differences between the Prachanda and Bhattarai culminate into a split in the CPN(M), it is the king who stands strengthened—and redeemed.

Can Prachanda ignore Bhattarai? What does the Maoist supremo gain through a split? Maoist insiders say that around 40 per cent of the People's Liberation Army (PLA), the CPN(M)'s armed wing, remains loyal to Bhattarai, arguably the party's popular face. That's why Prachanda has, in many ways, retracted from his earlier decision of stripping his comrade of all responsibilities. (Yet, Prachanda doesn't repose complete faith in Bhattarai. Even on his trip to India, Bhattarai was accompanied by Prachanda's two trusted men, Krishna Bahadur Mahara and Kishan Pykural. Insiders say the two were supposed to act as 'minders' of Bhattarai.)

Now the question: why did the Maoists have to meet the Left leaders of India? Answer: it is linked to the politics in Darjeeling, where the Maoists have a strong base among the Gorkhas whom they are inciting to assert their "right to self-determination". No wonder, West Bengal chief minister Buddhadeb Bhattacharya backs a hardline against the Maoists.

Where does India figure in the internal politics of the Maoists? For one, New Delhi can act as a bridge between the two leaders and ensure the Maoists aren't weakened to the point where the king feels powerful enough to ignore demands for democracy. Second, if the Bhattarai line of aligning with political parties prevails, India could earn respect for expanding the democratic base of Nepal and weaning away the rebels from the path of violence. Third, it's important for New Delhi to win the confidence of the Maoists because it can only then broker peace in Nepal. In other words, this can be perceived as India's gambit to ensure that the demand for a third-party mediation in Nepal doesn't gain currency.New Delhi considers Nepal to be under its security umbrella; any foreign intervention there is anathema to it.

The ultimate mystery: who's running India's Nepal policy? Sources say it's National Security Advisor M.K. Narayanan, who effectively controls both the Intelligence Bureau and the Research and Analysis Wing (RAW). Narayanan won his spurs in the Cold War era, and is regarded an expert in handling radical Left groups.

Yubaraj Ghimire In Kathmandu And Smita Gupta In Delhi