The flourishing migration racket accepts all: from cricketers to singers to dancers

outlookindia.com
-0001-11-30T00:00:00+0553
Quick! Which is Punjab's favourite bird these days? No, not the barbecued one. It's the kabootar (pigeon), of course. If there is any bird more talked about in Punjab today, it is this. And it's not for the gentle creature's homing qualities, the reference here is to the illegal migrant Punjabis who fly the roost and head for foreign lands using hook, crook, guile and whatever else it takes to fulfil their favourite dream.

Last week, when five women cricketers from Punjab vanished midway through their tour of the UK, where they were scheduled to play several club matches, the incident flipped the lid off a flourishing migration racket in the state. Under the guise of promoting sports and cultural activities, sports clubs, cultural troupes and religious 'jathas' have all been found to be a handy means to ferry wannabe migrants from Punjab.

The girls, promptly labelled the latest kabootars, went on August 9 as members of one Jalandhar-based Lynex Tours and Travel Club on a 21-day visa. The team, comprising 13 girls, played two matches at Worcestershire. But after that, five girls—Rajwant Kaur, Baljeet Kaur, Ekta Andotra, Parvesh Rani and Mandeep Virk—disappeared from the two houses in Hounslow in West London where they were lodged (two of them, Rajwant and Parvesh, have since returned).

Their disappearance fits into the established modus operandi of most such kabootars who use sports tournaments to get a visa to the country of their choice. Dubious clubs or popular Punjabi pop singers are known to charge a hefty sum (around Rs 8 to 10 lakh) for facilitating the entry of these desperate Punjabis, many of whom often sell their meagre land holdings to raise the money. The Doaba area of Punjab is infamous for such goings—virtually every family here has a member or two on foreign shores.

Take the case of Baljeet Kaur of Begowal village. She hails from a poor family which owns just about 2.5 acres of land, two educated-though-unemployed brothers and aging parents who saw a hope to migrate in their daughter's cricketing talent. Says Baljeet's mother Jagir Kaur: "Ravi Sharma, the proprietor of Lynex Club, assured us that if we followed his instructions, our daughter would be able to live and work in England."

Accordingly, they first spent Rs 40,000 for a cricketing tour to Sri Lanka in May this year, also organised by Sharma, ostensibly to build up a credible record of playing cricket abroad. On her return, Baljeet, who was doing MA privately in Amritsar, took admission in Jalandhar's Hansraj Mahila Vidyalaya (HMV) which, her mother reveals, "was done to help her get a visa for the cricket tour to the UK". But when the college principal refused to give an NOC for the tour since Baljeet and two other girls, who had also applied for it, had never attended classes, they procured it from two computer centres in Begowal and Jalandhar. "The understanding with Sharma was that he would procure a multiple-entry six-month visa for our daughter for which we paid him Rs 2 lakh. The rest was to be paid later. After playing a few matches, she was to stay back in the UK and pick up a small job and earn some money," says Jagir Kaur.

But Baljeet and the four others who went under similar arrangements felt cheated when Sharma produced visas for only 21 days, that too just as they boarded the flight from Amritsar. In retaliation, the five girls refused to play the remaining matches last Tuesday, ditched the travel agent and fled the house they were staying in. Amidst the hue and cry over the matter, both at home and in England, Sharma, who was questioned by the UK police, surfaced to say the girls' vanishing act was "planned by them and their parents who wanted their daughters to settle in the UK". 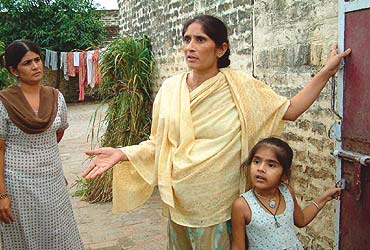 Rajwant's sister Paramjit said in Maqsoodan village, Jalandhar: "We're not too worried about Rajwant as we are in touch with her." Although tight-lipped about the affair, her family revealed they were trying to convince Rajwant to return since the matter had come out in the open. She has since come 'overboard' in the UK.

Says Mohanlal Singh Saini, president of the Punjab Travel Agents Association: "As visa rules for the US, Canada and the UK are becoming stricter, agents like Sharma are coming up with ingenious methods to facilitate the entry of desperate Punjabis to these countries." He adds: "This is generally done in connivance with immigration authorities and we do not admit such fly-by-night operators into our association." Saini claims that Sharma has been refused the association's membership because of his suspect activities. Saini estimates that about 20 per cent of ticketing business from Jalandhar has shifted to Delhi in the last two years because dubious operators prefer to book the tickets through unlicensed agents in Delhi and not through registered ones like them.

Although this is the first time a cricket team has come under cloud, travel agents in Jalandhar say that leaving boys in foreign countries is quite common in sports like kabaddi and wrestling. Sometime back, Sunny Gill, Dara Singh's son-in-law, was booked for taking boys to Singapore by having them pose as wrestlers.

In fact, many claim the overseas activities of cultural troupes and religious jathas going on foreign tours from Punjab too are suspect. Sukhwinder Singh 'Panchhi', a popular Punjabi singer, was recently nabbed by the Delhi police for allegedly taking Rs 10 lakh from two youth caught boarding a Paris-bound flight with fake visas. Presently on bail, 'Panchhi' is sharp in his denunciation of the tribe of Punjabi singers. Says he: "Barring a few, almost 80 per cent of Punjabi singers going abroad for performances have taken non-performers with them to get them across." He adds: "More often, it is the promoters of our shows who are involved. We are told that we can choose four or five musicians who will perform during our show. But the members of the bhangra or giddha team who generally provide filler items are chosen by them and often remain behind. I would say that till a couple of years ago, prominent singers and their promoters were not earning so much from their shows abroad as from ferrying kabootars", he says. About his own case, 'Panchhi' says that "if I had known that the promoter, Mangal Singh Dhillon (also arrested), would arrange duplicate visa documents for the two boys (Davinder Singh and Jaskaran Singh), I would never have recommended their names." He recalls an incident a few years ago when he went on a tour to the US, organised by a US-based promoter: "I was clearly told that the 12-member bhangra team accompanying my group will be separate and that I'd have no say in their selection. They danced on my show a couple of times and after that they disappeared and never came back. But why point fingers at us? Even politicians, industrialists, religious leaders etc take people across."

But for every successful kabootar who manages to get across, there are many disillusioned ones back home whose well-laid plans could never take off. Meet Agya Pal, a 22-year-old from village Mana Talwandi in Jalandhar district. He told Outlook of how his father Satvir Singh, a former inspector in the Punjab Police, paid

Rs 1.5 lakh to Sukhi Brar, a popular Punjabi singer who frequently goes abroad to perform shows for the Punjabi population in Canada and US: "I was put in a group of 12 boys, all of whom wanted to go abroad. We were trained by her for two months to perform a play, Chamkaur Di Gali. We stayed at a house in Mohali and practised in the auditorium of a local school. The understanding with Sukhi was that we would pay her the remaining amount of Rs 5 lakh after landing in the US.But the trip never materialised because one of the boys ditched the group and went with someone else."

When Sukhi allegedly refused to part with the advance money, Pal and his father lodged a complaint with the Bholath police station. "We got back our money last month after the local police intervened," he says. Although Sukhi Brar couldn't be contacted, her son Gagan denied the charges and claimed "the allegations against my mother are false". Police officials say that after they booked 'Panchhi', most singers are evading queries. In Jalandhar's Nakodar chowk, where offices of numerous such singers are located cheek-by-jowl, nearby shopkeepers say that for the past few weeks the offices are mostly closed.

Says Saini: "People who go across on short-term visas like this generally go underground after their visas expire. They then work illegally in the host country and after a few years try to get legalised." Not that getting permission to stay on matters much for the determined Punjabi. "One can easily stay for 10 to 15 years in countries like Canada while working on farms there," says Pal whose parents have now gone to Canada on a tourist visa. The police can really do precious little in the matter. Says Dinkar Gupta, dig, Jalandhar: "In the absence of concrete complaints, we are unable to investigate the cases. Since the racket is a matter of complicity between the travel agent and the migrant, we come into the picture only when either party defrauds the other and a complaint is made with us." Even in the case of the women cricketers, the complicity of the girls' parents is obvious as they never approached the police for help in tracing their missing daughters.

Now, even as Sharma battles the present storm surrounding his activities, he has set the cat among the pigeons by alleging that the Sports Club Jalandhar, an old sporting institute, too had sent a boys' cricket team to the UK in July. Four of them, according to him, were non-cricketers. And they haven't returned since. The general secretary of the club, Harvinder Oberoi, however, refutes the allegation saying that only two of his team members have stayed back and claims they did so for personal reasons after obtaining permission from the club.

Laltesh Bhasin, secretary of the Punjab Women's Cricket Association, told Outlook that there is no system of routing such tours through registered sports associations like theirs. Says he: "In recent years, sports clubs from here manage invitations from sponsoring clubs abroad and the immigration authorities are generally satisfied with the guarantees given by them." Private sports federations do not require any NOCs from the government to play abroad. And the trend continues, as droves of hopeful punjabis risk their everything to go abroad.

Is it any wonder then that pigeon-shaped water storage tanks are quietly taking the pride of place among aeroplane and football shaped ones commonly seen atop houses in rural Punjab?

The Tao Of Shuffled Addresses