Selection is always a contentious issue. However, when it is conditioned by politics and race, it becomes an untenable situation. 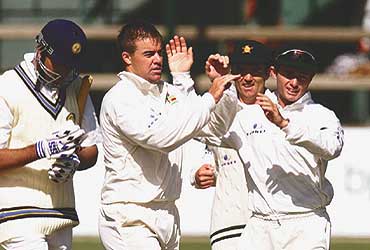 outlookindia.com
-0001-11-30T00:00:00+0553
After that fantastic victory in the second Test, one would be forgiven for painting a very rosy picture for Zimbabwe cricket. Indeed, one thought cricket in the country was on the upward swing. However, the sequence of events since then has left a very bad taste in the mouth for many of us. Whatever transpired off the field after that morale-boosting victory had a direct impact on our next two matches. To say the least, our performances have been nothing short of being diabolical. Many contentious issues concerning the future of cricket in this country have cropped up since then.

For the past few months, the Zimbabwe Cricket Union has given a Task Force the mandate to ensure full integration of cricket in this country by 2004. It's the composition of this Task Force, and the document it has presented, which has caused consternation among both the players and the public at large. This is not to say that all of it is nonsense. But certainly parts of it are totally unfeasible and unworkable. There was not a single player on its committee, and although it did consult the player's body, none of our thoughts were reflected in the document which was tabled. And now the Union has ratified it as the blueprint for all decisions concerning the future of cricket in this country. I only hope that sanity will eventually prevail and the authorities adopt a more realistic approach for the sake of cricket.

Indeed, the document has very much been a focal point. But it was the issue of selection that brought things to a head last week. Now, team composition is one issue which is always the talking point, no matter where in the world you are or what sport you play. However, when it is conditioned by politics and race, it becomes an untenable situation. The captain, coach and players were of the opinion that there was a lack of transparency and merit in selecting the national team. In fact, Heath Streak was particularly disappointed because he felt his views were not being given much attention—often after attending the selection meeting, he would find three to four changes in the final list of players. This is what happened for the first one-dayer against the West Indies.

The captain, caught between the rock and a hard place, had reached the end of his tether trying to explain to certain players the reasons for their exclusion from the team. He submitted a letter to the Chief Executive demanding that the team be retracted and a fresh eleven announced with himself and the coach as the selectors. After prolonged talks, on the eve of the game, the Zimbabwe Cricket Union decided to stick to its decision—the original team, it said, would stand. This left Heath with no alternative but to resign on the morning of the game. It was indeed one of the saddest days for cricket in Zimbabwe and also for me as a professional cricketer. Grant Flower took over as stand-in captain for the toss, although we asked Heath to lead us on the field as a mark of support for him. The team played under protest as we were promised that a decision would be taken that same evening to resolve the situation. The next morning the Union's decision was communicated—Heath was made a selector along with the coach and he was also reinstated as the captain.

Since then, three of the selectors have resigned, stating that they are no longer needed and that the players have too much power. It is very difficult to focus on the game in these trying times. But we are professionals. We have our pride and respect for the game to spur us on, and as cricketers we are aware of our responsibilities on the field to carry the rich tradition of the game forward. Both the West Indies and India are looking good units at the moment and we realise we have to lift our game a notch or two to stay in contention for the title.

To conclude, I would like to state that these are indeed trying times for all of us. My only hope is that the decision-makers will act wisely to ensure that cricket is preserved and encouraged to flourish under the right conditions and in the right direction. Those with a passion for the game want to see cricket emerge as the winner, and I urge everybody to remember that "cricket is bigger than any one individual".