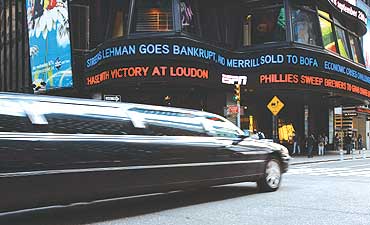 outlookindia.com
-0001-11-30T00:00:00+0553
Former Federal Reserve chairman Alan Greenspan called this a "one-in-a-century crisis". Indeed, the demise of investment bank Lehman Brothers, the sale of Merrill Lynch, and the US government takeover of insurance giant American International Group have sent shock waves through the world's stockmarkets. After all, for the better part of a little over 150 years, these have been some of the most celebrated names on Wall Street. Already, there is feverish speculation that Morgan Stanley will be the next one to hit the wall, leaving only Goldman Sachs safe—so far—from any imminent danger.

Since the credit problems erupted on the world scene last summer, close to $13 billion has been written down. Eventually, these losses are expected to rise past $1 trillion, say most experts. As we now know, the biggest mistake committed by American banks and financial firms was to play in collateralised debt obligations (CDOs) and similar structured (but dodgy) credit deals. CDOs are an unregulated type of asset-backed security created mostly from a portfolio of fixed-income assets such as mortgages.

Many institutions bundled housing mortgages (encouraged by a roaring housing boom) as securities (like bonds), "sliced and diced" them, repackaged them and then sold them several times over. As a result, what was once meant to distribute risk across the financial system ended up concentrating it, with most buyers and sellers having little clue about where the dangers lurked. It now emerges that several investment banks unabashedly invested in risky assets, sometimes with capital levels of as low as 2-4 per cent. So, large drops in the value of these CDOs pretty much wiped out their net worth.

A lot of toxic CDOs have their origin in the sub-prime mortgages sector. But alarmingly, the housing boom also encouraged rather imprudent behaviour from ordinary mortgage-seekers as well—and there has been fallout from that too. When the housing boom turned to bust, these buyers, who had little equity to start with, simply walked away from their homes (under existing laws, a mortgage buyer can stop paying when the debt is more than the house's value).

In addition, some buyers speculated and borrowed with little or nothing given upfront, in the hope that they could make a quick-sale profit. The demand led to huge overbuilding—now, as house prices tumble, that inventory is being liquidated in emergency sales. Such moves threaten the health of a large swathe of mortgages and mortgage-backed securities—thus the problems encountered by Fannie Mae and Freddie Mac. Both firms own or guarantee about $5.3 trillion worth of home loans, more than half the outstanding mortgages in the US.

With so many jarring events taking place in recent weeks, investors no longer believe what the authorities have to say about the future anymore. In the past, a bailout by the Fed or write-downs by companies encouraged markets to cheer in the belief that, for the moment, the crisis had passed. Not any longer. Now the blows just seem to continue and there is an acceptance that things will get much worse before they get any better. "A lot of assets are still not marked to market, so more will have to be sold at lower than what they are currently valued," says David Depice, Professor of Economics at Tufts University.

As the twin engines that powered record growth in the US financial sector—cheap credit and soaring property prices—sputter to a halt, the implications for the economy are forbidding. "We are halfway through it, more negative 'surprises' are likely still," warns Professor Carmen Reinhart of the University of Maryland. It may take quite a while before house prices stabilise in the US—expectations are they will fall more this year and will stabilise only next year.

The impact on global markets will undoubtedly be brutal. The once-mighty US banking system is now cash-starved. Banks have turned fearful of lending to new borrowers and even to one another. Overall, it may take at least two to three years before the crisis blows over. Until then hundreds of smaller firms are in the queue for bankruptcy.

A weakness in the US economy is good for nobody in the world. And that is true for India too. But the biggest risk is for Indian software services companies, which have thrived for decades largely on outsourcing from US financial firms. Till the mess completely plays out, business will be tough for these firms. The most vulnerable is TCS, which derives about 42 per cent of revenues from the financial segment. Others like Infosys Technologies, Wipro and Satyam Computer too have anywhere between 25 per cent and 35 per cent business coming from the segment.

As the rest of India Inc will discover, raising capital will now become a Herculean task. The US financiers that have ensured continuous flow of money into Indian companies and stockmarket are now shying away from lending. This situation is unlikely to change soon. And what about the impact of the Lehman bankruptcy? India has not much to lose though the firm's employees here are out of jobs. Indian banks do not have significant exposure to Lehman, except ICICI Bank, which has an exposure of about Rs 375 crore. That's less than 1 per cent of ICICI's total assets. Lehman had roughly Rs 1,000 crore invested in the Indian stockmarket at the end of June 2008, but it had sold 40 per cent of its holdings before the bankruptcy.

The market barometer Sensex lost 685 points (4.89 per cent) in the week up to September 18 on the shocking news from the US. Yet, going by past reactions, the performance has not been as bad as one would have thought. Some foreign firms were actually buying local stocks. But those were opportunistic moves by certain smaller, nimble-footed funds to exploit the weakness in the rupee, reckon stock dealers.

Given the global situation, the mood on Dalal Street remains sombre at a time when local factors too are weighing down the economy. On the flip side, a slowdown in the global economy, as widely expected, would rein in prices of commodities—a relief for industry and the man on the street. Clearly, the stockmarkets in India will remain weak till the dust settles down on Wall Street.

(The author is editor, Outlook Profit)