Musharraf hopes to remain head of state and chief of staff 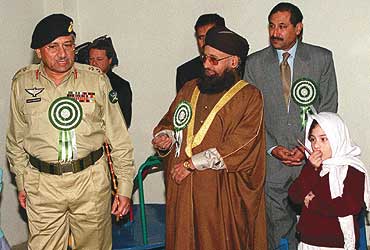 outlookindia.com
-0001-11-30T00:00:00+0553
These days, Pakistan's political class is remembering the troubled tenure (1985-88) of Prime Minister Mohammad Khan Junejo. Politicians gleefully point out how then President Gen Zia-ul-Haq conducted a partyless election in 1985 and then appointed Junejo PM, believing he could only be a willing rubber stamp. But power has its own logic: Junejo began to assert himself, defying the president to send his foreign minister to negotiate on the Geneva Accord (Pakistan, Afghanistan, the ussr and the US were participants), which ultimately paved the way for the withdrawal of the Soviets from Afghanistan.

Junejo's audacity stung Zia. The inevitable happened: the military strongman invoked the Fifth Amendment to the Constitution to sack Junejo, reminding the ruling elite who their real political boss was.

Why are Pakistani politicians suddenly nostalgic about Junejo? Because of President Pervez Musharraf's political ambition. Riding the global support he has mustered, and buoyed by opinion polls that show him to have won popular endorsement for his anti-jehad policies, Musharraf has been sending signals of his intention to stay in power, albeit with a democratic sheen. Simultaneously, he wants to retain the office of chief of army staff (coas).

Already, the brains around Musharraf are pondering ways he can do that post-election (the court has laid down an October deadline). Former Supreme Court Bar Association president Abid Hasan Minto speculates the possible options before Musharraf: "He cannot be chosen by parliament and the provincial assemblies, which form the electoral college for electing the president, as the Constitution bans a serving general from contesting. He could amend the Constitution but the judiciary will have to decide whether such an amendment is within the parameters the Supreme Court laid down for bringing about a change in the basic law."

Also, a constitutional amendment needs a two-third majority. Can he garner this kind of support? In fact, all Musharraf's policy measures, from when he became chief executive, would have to be ratified, again, by two-thirds of both houses of parliament to have legal validity.

Now suppose the Constitution is amended, the Supreme Court rules in his favour, and Musharraf becomes both the president and coas. What happens then? For one, the need to have parliament ratify his policies would expose him to politics, Pakistani style. There's no grave opposition to his policies now but Pakistani legislators need little more than conviction and persuasion to cast their votes; this is bound to set the tone for bargaining and compromises, a distinguishing trait of democracy. Experts feel this could render Musharraf helpless a la Zia.

So, how does Musharraf ensure he becomes president and has a compliant parliament? Through sophisticated rigging, argue politicians. Some even claim this process has already begun. A pointer: 25 seats have been reserved for technocrats in parliament, violating the very essence of democracy. Technocrats don't need affirmative action, do they? Says political analyst Mohammad Waseem, "The provision for reserving 25 seats for technocrats is both artificial and arbitrary. This will be resented by politicians who struggle to win their seats through open competition."

Nominated to these technocrat seats would be those on whom Musharraf now relies and whom Washington also loves. Finance minister Shaukat Aziz heads this list, difficult as he would find it to win from anywhere in Pakistan. And this is the man tipped to be leader of the house.

But Musharraf would still need a pliant house to elect Aziz as its leader. This has sparked speculation about getting the Pakistan Muslim League (pml) to play the dubious role of the king's party. But Nawaz Sharif's exit has rendered the pml rudderless, raising doubts of the party winning. Behind the scenes there have been some negotiations with Benazir Bhutto's Pakistan People's Party. But Musharraf distrusts her too much to allow her in the prime minister's house.

Then again, ultimately, it is Washington that holds the vital card. US diplomats are active in the capital, wondering whether the general would last long enough to implement their agenda. Considering the Americans' selective morality, it wouldn't come as a surprise were they to look the other way in case a nervous president decides not to hold elections.

He is Charles Atlas to Worli's would-be cops, and anyone else who fits