Cities In The Red 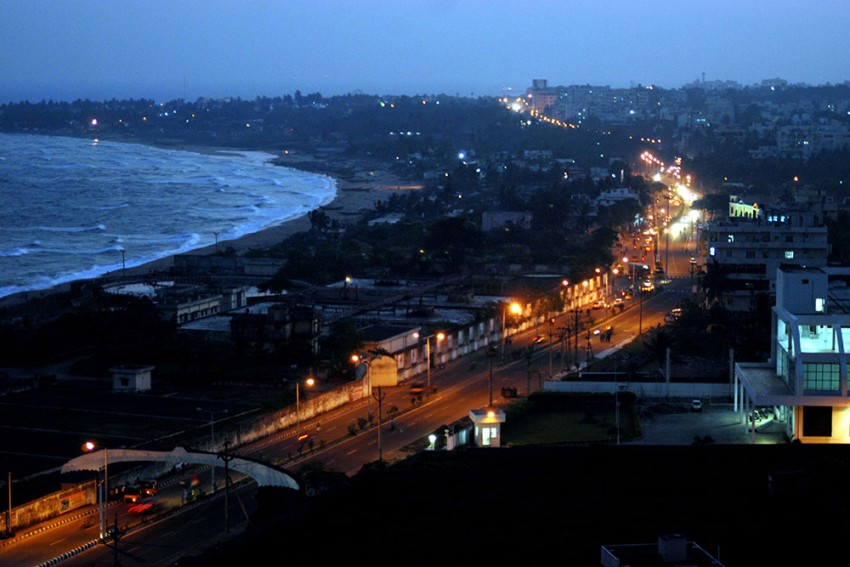 A view of Visakhapatnam and its beach
Photo by Jitender Gupta
Dunu Roy March 17, 2016 00:00 IST Cities In The Red 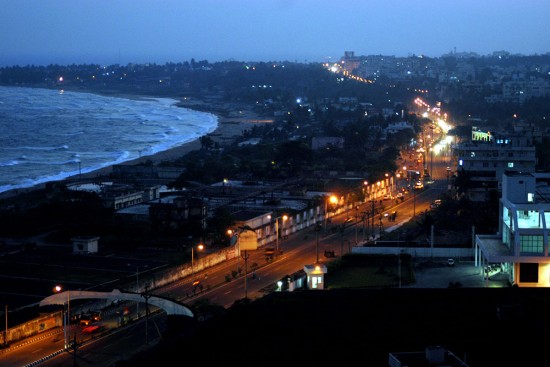 The NDA government announced in 2015 that it was allotting over Rs 7,000 crore for 100 “smart cities”, creating a ripple of excitement, although it was not quite clear what a ‘smart’ city was. Sarkari guidelines said: “Cities are engines of growth for the economy”, but “there is no universally accepted definition of a Smart City”. So analysts had to tease out the link to Modi’s mantra of economic growth: if urban populations were to grow to 40 per cent, that would contribute 75 per cent of GDP by 2030.

The next mantra was that provision of core infrastructure (in waste management, water, energy and transport) would be accompanied by ‘smart’ solutions. Thus, GIS, CCTVs, chips, sensors, cellphones, broadband and so on would be used to collate and manage information. This would not only lead to more efficiency, but also enhance the revenue stream of service providers.

The guidelines offer four ways of achieving this: retrofitting, under which existing infrastructure in some 500 acres will be improved; redevelopment, under which existing infrastructure on some 50 acres will be laid out again; a greenfield category, or development of some 250 acres fresh land using ‘smart’ principles; and pan-city development, involving tech, information and data to imp­rove infrastructure and services. The selection of cities will depend on their capacity and “economic potential”. The money will be administered by a special purpose vehicle (SPV) and the returns would accrue to it.

How has it worked out in practice? Let’s look at two cities—Visakhapatnam and Belgaum—chosen arbitrarily from the 20 selected. Visakhapatnam, at the bottom of the list and earlier renewed under JNNURM, is spread over 60,000 hectares (600 sq km), with a 19 lakh population. But only 0.4 per cent of this area has been chosen for retrofitting, involving four per cent of the population. The 3.9 lakh responses from citizens marked out disaster management (16 per cent) and sewage (15 per cent) as major concerns, besides water supply (14 per cent). But of the Rs 1,938 crore budget, planners have chosen to prioritise rooftop solar panels (16 per cent), underground wiring (12 per cent) and beach beautification (12 per cent). The people’s priorities—disaster management, sewage and water supply—only get seven, two and less than two per cent respectively. The only head under which the whole city will be covered is disaster management; and 93 per cent of the budget is dedicated to developing a narrow strip along R.K. beach that’s been chosen for retrofitting.

Belgaum, near the top of the list, did not come under JNNURM but received funds from the Rajiv Awas Yojana and the Swachh Bharat Mission. Its total budget of Rs 3,866 crore is almost twice of Visakhapatnam’s, although its area of 9,400 hectares (94 sq km) and five lakh population are minuscule in comparison. The area chosen for ‘smart’ development is 11 per cent, involving 16 per cent of the population, but gets 43 per cent of the budget. Citizens pioritised dec­ongestion of the city’s core (12 per cent), water supply (9 per cent) and energy and sanitation (eight per cent each). But most of money goes for energy efficiency (24 per cent), urban mobility (19 per cent) and water supply (12 per cent)—mostly for the entire city, in accordance with citizens’ wishes.

Unlike Visakhapatnam, Belagaum proposes to get 26 per cent of funding from the private sector through PPP projects, though both cities depend on equity of Rs 1,000 crore from the central and state governments. So, it seems, smaller cities are going to be ‘smarter’ than bigger ones in accounting to their citizens.

The crux, however, is: Visakhapatnam predicts a cum­ulative cost of Rs 2,080 crore after 15 years and revenues of Rs 542 crore, and is likely to remain in debt (though it shows the balance as assets). Belgaum, on the other hand, projects revenues of Rs 1,499 crore over 15 years, but the balance, after SPV expenses, is Rs 447 crore. Will such ‘smartness’ invite investors? Who will pay the costs? Will corporates alone benefit? Most importantly, what happens to democratic decision-making?

Our cities are unfriendly to the poor, and the fault is largely systemic. Delhi boasts of governance that’s better than other cities, but the Hazards Centre counted  three lakh homeless families in the capital.

“No Watering Down, PM’s Vision Is Being Made Complete”