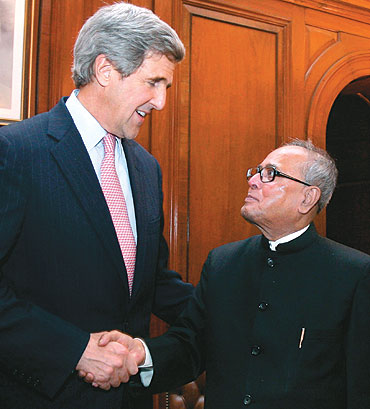 Even in ordinary times it would have been difficult to ignore 130 Indian heads of mission gathered under the same roof. Now, in what are extraordinary times, it is impossible to be indifferent to this august assembly. Scheduled to meet between December 22 and 24 long before Mumbai happened, with the avowed aim of rethinking India's foreign policy, these heads of mission have their job cut out—how to rally world opinion to persuade, even compel Pakistan, to take "visible and verifiable" action against the perpetrators of the Mumbai carnage. "This is an unprecedented meeting. Never before have all the Indian heads of mission been called for such a brainstorming session," says a senior South Block official.

Indeed, the Mumbai terror attacks will cast a sinister shadow when Indian ambassadors and high commissioners gather at the Foreign Service Institute in Delhi for a three-day meeting. Officials say terror will now dominate what was earlier supposed to be an exercise to define the country's major foreign policy goals and ways of meeting them.

The two main themes at the meeting are 'Economy' and 'Security'. Post-Mumbai, the Indian leadership has been arguing that the terror attacks in the financial capital, as also those elsewhere in the last few years, are aimed at arresting India's economic growth and development. Officials feel 'elements' in Pakistan have masterminded these attacks because they fear they won't be able to otherwise match a rising India's economic and political clout. An interaction with the leadership will provide the ambassadors a sense of how New Delhi plans to deal with the emerging scenario.

Many countries, like the US and UK, follow the tradition of convening a meeting of their ambassadors at regular intervals. For India, though, the December 22 meet is its first. MEA sources say the proposal for this meeting was initiated by foreign secretary Shiv Shankar Menon, who felt it was time New Delhi met its ambassadors at regular intervals. Planned for March, it was postponed to August-September. But with key foreign officials busy in securing the Nuclear Suppliers Group waiver, the proposed meeting was pushed to December-end.

Critics say the government should have waited till the general election before convening this meeting. Should it not have sought a fresh mandate before rejigging the country's foreign policy, they ask. As former foreign minister and BJP leader Yashwant Sinha told Outlook, "It would have been useful had it been held in 2004, soon after the UPA government came to power. What will they achieve when the government of the day has to face elections in a few months?" Sinha feels a meeting of heads of mission would have been fruitful had these been region-specific. "Less number of people allows a better interactive session. During dinners or lunches, it also provides ambassadors the opportunity of meeting the leaders individually."

Some serving envoys agree with Sinha, saying a meeting in 2004 could have helped them identify areas important to the UPA. They also point to another oddity—the meeting will have ambassadors due to retire soon as well as recent appointees. "What kind of interaction is expected when you have such a peculiar mix of heads of mission, other than subjecting them to a series of lectures over three days?" asks an ambassador from the neighbourhood.

Lectures there will be aplenty. Prime Minister Manmohan Singh, external affairs minister Pranab Mukherjee, deputy chairman of the Planning Commission Montek Singh Ahluwalia, commerce minister Kamal Nath and a clutch of other ministers are scheduled to address the meeting. At the end of the interactive session, the heads of missions are to call on President Pratibha Patil.

Foreign ministry sources, however, argue that Mumbai has changed the meeting's agenda. The ambassadors, they say, would want to know the action the government is contemplating against Pakistan, particularly as New Delhi has not ruled out the military option. Sources say they want to have a sense of the Centre's thinking because it is they who would play a key role in rallying world opinion in India's favour. "The meeting couldn't have come at a better time," says a close aide of the prime minister. "It is the ideal opportunity for the leadership to share with the ambassadors on how it plans to deal with the situation."

Over the last fortnight, as foreign dignitaries flew in and out of New Delhi, the Indian leadership stressed that it favours the diplomatic rather than military option to compel Pakistan to act. Pranab Mukherjee told US leader and senate foreign relations committee leader-designate John Kerry and others that irrespective of the power arrangement in Pakistan, India always was the target of terror attacks originating from there. He pointed out that Parliament was attacked when Gen Musharraf was in power; the Mumbai incident has happened during the civilian rule of Asif Ali Zardari.

Notwithstanding Islamabad's scepticism, the Indian leadership furnished ample evidence to world leaders about Pakistan's role in Mumbai, thus convincing them to endorse the UN Security Council imposing sanctions on the Jamaat-ud-Dawa and placing many of its leading members on the terror watch-list.

Bolstering India's claim about the involvement of 'elements' in Pakistan in the Mumbai attack, Russia recently claimed that underworld don Dawood Ibrahim, who New Delhi believes is in Karachi, was behind last month's attack. Victor Ivanov, director of Russia's anti-narcotics services, was quoted by the government-controlled Rossikava Gazeta as saying, "The inputs testify that infamous regional drug baron Dawood Ibrahim had provided his logistics network to prepare and carry out the Mumbai terror attacks." This was discussed in more detail when Indian and Russian officials met early this week for their Joint Working Group on counter-terrorism.

But while India's attempt so far has been on garnering support to pressurise Pakistan to dismantle its terror apparatus, most international players have also been getting its underlying message: the restraint shown by New Delhi cannot last forever. Perhaps this is what will also be conveyed to the envoys.

Once they return to their posts, their job, it is believed, will have been defined: convince the leaders of host countries to mount pressure on Pakistan to root out terrorism. Otherwise, they should prepare themselves to keep guessing New Delhi's plan and intention.