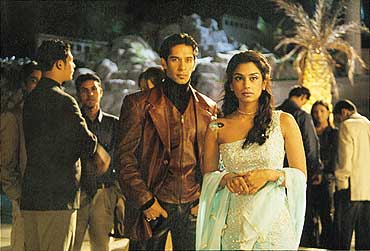 He comes somewhere in the middle of the film and simply walks away with it. Om Puri is the funny don Qasim Khan Qayamat who loves reciting C-grade sher-o-shairi, is saddled with two bumbling henchmen called Bhuna and Gosht, desires to be seen in the company of Page 3 people, likes playing Gabbar-Gabbar in parties and has just one regret in life, that despite financing more films and killing more people than anyone else in the underworld, he never gets his due recognition from the print media and TV channels. "Qayamat kaun? (Who's Qayamat?)"—that's the bane of his life. Puri plays out the spoof with an obvious relish and easy banter which makes for some entertaining moments in the film. However, when Puri's not on the screen, the workings don't remain consistently enjoyable.