Town-criers on both sides of ‘Brexit’ have split Britain. At stake are polity, economy, foreign relations and identity. 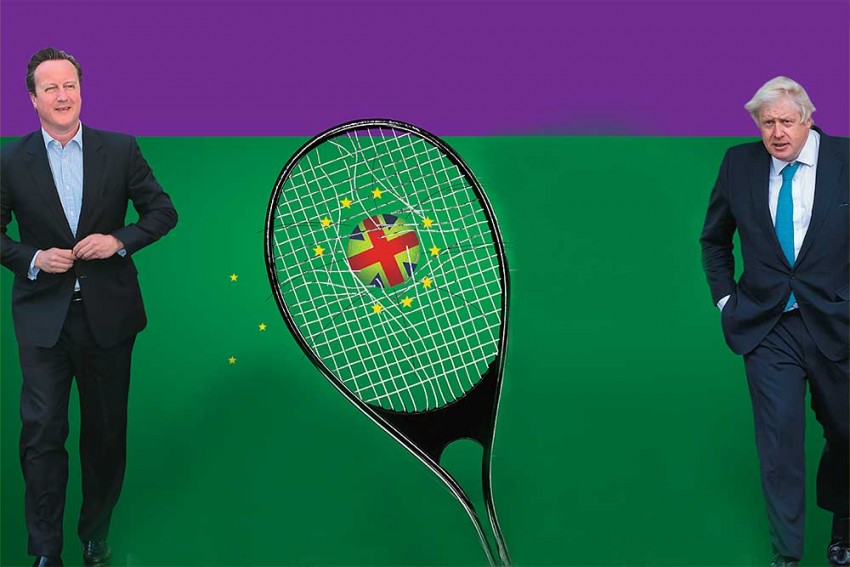 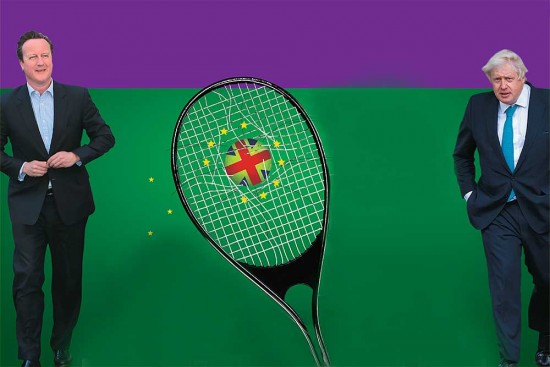 Just how European is Britain? This northern island not quite within, not quite without the continent lauded and blamed in equal measure for so much of what makes the world great, and awful.

Great Britain has always been more warm beer and cricket than red wine and boules; more fish and chips than moules et frites, more invasion than all­iance. And it has a history as rich and intricate as most of its European cousins—linked inextricably in many cases. Incestuous royal families, languages of court and of the people, the Fleur de Lis, the Knights Templar, the Eurovision song contest and the European football championships...this continent may be a house divided, but it is a house nonetheless.

But for how much longer? Britain votes on June 23 on whether or not to stay in the European Union (EU). The last time the UK had such a vote was on remaining in what was then known as the European Economic Community (EEC) or the Com­mon Market in 1975. Then, 67 per cent Bri­­tons said yes. This time it’s unlikely either side will win by such a convincing margin. The Syria refugee crisis, a global recession, the rise of the far-right, anti-immigrant parties across the continent and within the UK, and a polarisation in British politics not seen since Margaret Thatcher’s time have put this vote on a knife’s edge.

As the landscape shifts and polls show a turn towards the ‘Leave’ camp, the final push for Britain’s EU future has left the nation divided. What was seen as primarily a face-off between factions of the right-wing Conservative party has seemingly passed the baton to left-wing Labour for the ‘Remain’ camp, and to the even more right-wing UK Independence Party for ‘Leave’.

Europe is calling, opening its arms and pleading for harmony for its most robust supra-national institution. Britons are angry about immigration and the economy, while the predominately right-wing press runs scare stories of bureaucracy and Euro­cratic waste. It is against this backdrop that the UK goes to the ballot box.

Anand Menon, professor of European Politics and Foreign Affairs at King’s Col­lege, London, says: “There has been a disintegration of the centre ground. I’m not sure I’d call it ideology per se, there are certainly elements of values being discussed in the campaign, but it’s more pernicious than ideology. There are lots of unfounded cla­ims being thrown around—by both sides.”

As Europe pleads for harmony, Britons are angry about immigration and the economy.

The electorate is largely confused and the arguments surrounding what has traditionally been seen as an economic debate have become overtly political. With the rise of Jeremy Corbyn—who leads the Remain camp—as leader of the Labour party bringing back the hard left, and Boris Johnson becoming a talisman of the hard right, has the spectre of ideology returned to haunt the feast of populism in British politics?

Robert Saunders, lecturer at London’s Queen Mary University, says: “The rise of Jeremy Corbyn and Boris Johnson is about identity, not ideology. Boris is popular bec­ause he is seen as fun, witty and likeable but even on Brexit, many suspect that he could cheerfully have campaigned for either side. Corbyn’s appeal is about authenticity: the perception that he has stuck to his beliefs for 30 years. That resonates more than the actual content of those beliefs.”

As for the EU—an abstruse organisation to most—it has been seemingly blamed for every ill befalling Britons. “We start off with a relatively low knowledge base in this cou­­ntry about the EU compared to other member-states. And you can’t educate people overnight—that takes years,,” says Menon. He thinks analysts are also being hard on the campaigns themselves. “The pur­­pose of a political campaign is not necessarily to educate, but to win. And you do whatever it takes, and both sides are doing that—they are not trying to win over the undecideds, but shouting a lot at people who agree to ensure they actually vote.” 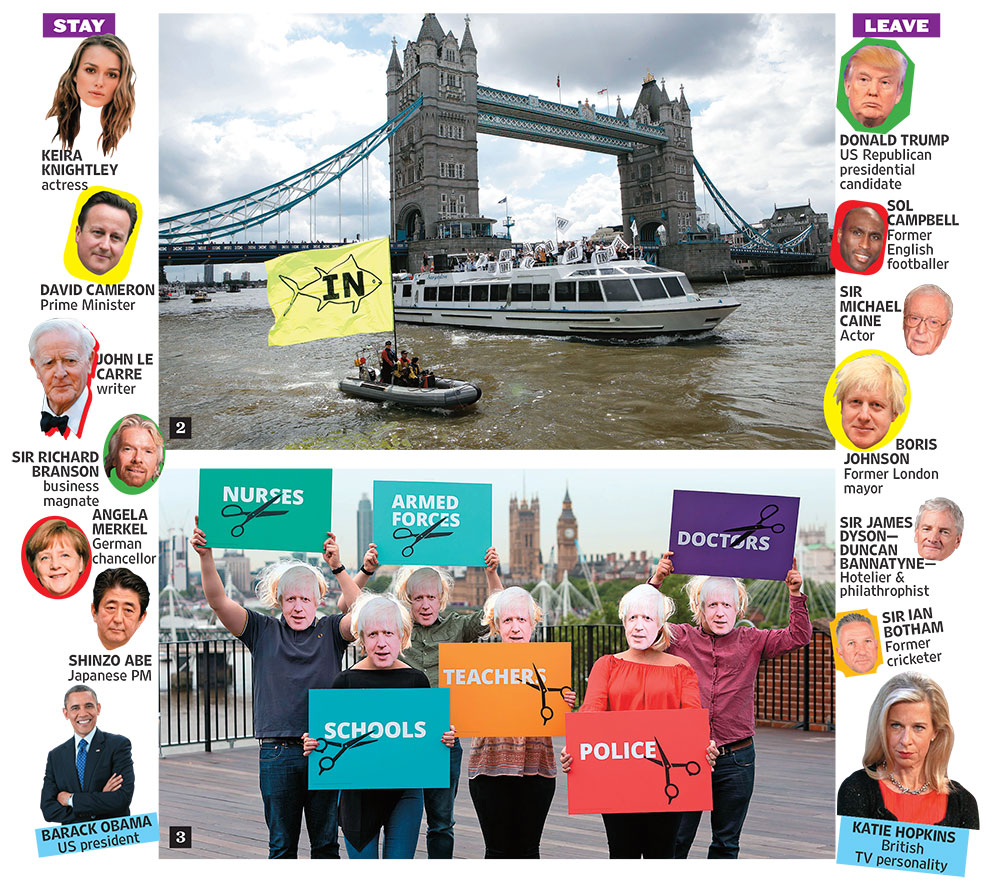 Mathew Humphrey, professor at Nott­ingham University, points out that prime ministers used to say that Britain must be at the heart of Europe; now, they boast of being on the periphery, with exemptions and special arrangements. “The problem for Remain is that the more politicians boast of our opt-outs from all the undesirable things being done by the EU, the more people wonder why we shouldn’t just opt out of the whole thing,” he says.

But what are the claims? The Leave camp pretty much wraps its arguments up in saving money and limiting immigration, with shades of the ‘let’s make Britain great again’ type slogans that have accompanied many a jingoistic campaign in times past.

“Boris is popular as he’s seen as fun and likeable. Corbyn’s appeal is about authenticity.”

If Britain leaves, or partakes in ‘Brexit’, it “wll end up as a rather small, not very pow­­erful, industrialised country—maybe slightly more important than Canada, but will lose its influence in the EU”, says Seb­astien Dullien, senior policy fellow at the European Council on Foreign Relations. “Britain has received a lot of preferential treatment in the EU and clearly benefits from its membership. This is why the EU partners are annoyed with David Cameron’s gamble of a referendum and the possibility of British voters actually deciding to leave.”

And for those assuming that the UK would be able to look back at its former colonies, and forge new trading deals with the US, China, Russia et al, many economists have news for them.

Swati Dhingra of the London School of Economics and co-author of Life after Brexit, an LSE report, says, “The first thing would be a two-year negotiation period, which Britain would likely not be allowed to sit on, which would mean that any future trade liberalisations or pacts is not something that it would have a voice in.”

“The second issue is that the UK wouldn’t have a free trade agreement with the EU, even to get to the European Free Trade Association (deals with European but non-EU nations like Norway and Swit­ze­rland) would be a road it would have to go back down. Britain also loses its status with the other trade partners that the EU has negotiated with on its behalf, which would mean the default would be membership of the World Trade Organisation,” she adds.

As for a new deal with India, Dhingra says: “Nothing stops us from trading with the Commonwealth or US now. Germ­any follows the same norms but trades more with India, as it is more competitive.”

“There’s also the EU-India Free Trade Agre­­ement (FTA), which has been negotiated for a while now, and one of the main reasons it’s being held up is because the UK is not that keen on getting rid of mobility restrictions on movement of workers. I don’t see how those problems are going to go away, especially as the UK would now be a much smaller trade partner,” she says.

Domestically, the contest has been billed as a civil war amongst the Tories—Cameron, the modern, pan-European populist on one side, and Johnson, the apparent traditional heartlander (see box), on the other.

“A vote to Leave would almost certainly finish Cameron,” says Saunders. “In 1975, PM Harold Wilson said that he was 51 per cent for staying in. By contrast, Cam­eron has led the Remain campaign and has put his personal authority on the line, by warning of dire economic consequences if we pull out. A vote to Leave would be a crushing vote of no confidence. Johnson is in a stro­nger position. If he wins, he’s the hero of the hour. If he loses, angry Tories will still see him as the man who fought for their side.”

It seems the predictions seem hysterical either way—damned if we do, extra damned if we don’t. The entire campaign feels like it is being played out in a super-charged, parallel universe. As Menon says: “We end up in this bizarre situation where Cameron is depending on his domestic enemies to help him win a referendum on Europe.”